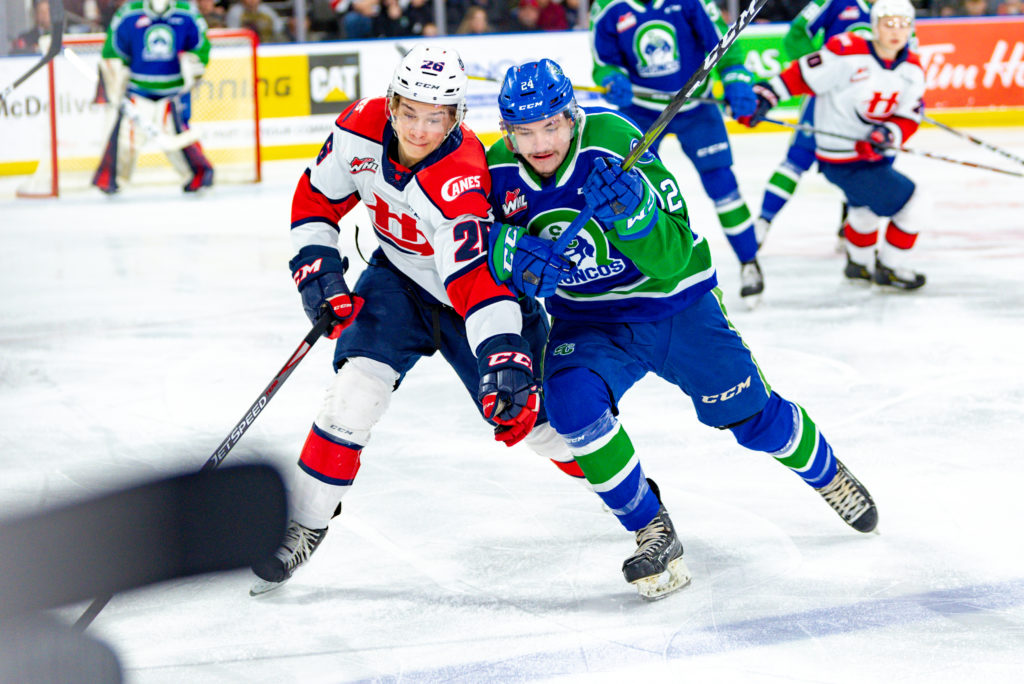 Swift Current, SK – The Lethbridge Hurricanes played their final game of 2019 – and the decade – on Monday with a 3-1 win in Swift Current against the Broncos.

The Hurricanes had a strong first period as they outshot the Broncos 13-9. The ‘Canes had a few good chances to open the scoring but Swift Current netminder Isaac Poulter stood tall turning aside all 13 shots he faced in the period. The Broncos struck first in the game at the 13:57 mark when Tyler Smithies snapped one under the arm of Carl Tetachuk on an odd-man rush to make it 1-0 Swift Current after twenty minutes of play.

The ‘Canes were issued a power play opportunity early in the second period and they would make good tying the game as Logan Barlage – who had four points in the 6-0 win over Swift Current on Saturday – banged home his 13th goal of the season to make it a 1-1 tie; Alex Cotton and Alex Thacker earned the assist on the sixth goal of the year for Barlage against his former team. The ‘Canes and Broncos traded chances the rest of the period but both Tetachuk and Poulter stood tall as the game was tied after forty minutes of play.

In the third period, the Hurricanes broke the tie when Justin Hall slammed home his eighth of the season on a rebound to make it 2-1 Lethbridge at the 9:01 mark; Barlage earned the lone assist on the goal. Swift Current pulled the goaltender for the extra attacker late in the game, but Hall would net his second of the night to make it a 3-1 final in favour of the Hurricanes.

Lethbridge outshot Swift Current 11-7 in the third period and 33-28 in the game. The ‘Canes went 1/3 on the power play while going 2/2 on the penalty kill.

The win for the Hurricanes boosts their road record to an impressive 12-5-0-1 on the season as they are tied for the most away victories in the WHL so far this season. The ‘Canes overall record improves to 23-10-0-5 on the year as they have won three straight games and are 6-1-0-0 in their last seven outings.

The Hurricanes will return to action on January 3rd when they welcome the Seattle Thunderbirds to the ENMAX Centre at 7:00pm before hosting the Calgary Hitmen on January 4th. Tickets can be purchased online at www.enmaxcentre.ca, by calling 403-329-SEAT (7328) or by visiting the ENMAX Centre Ticket Centre.