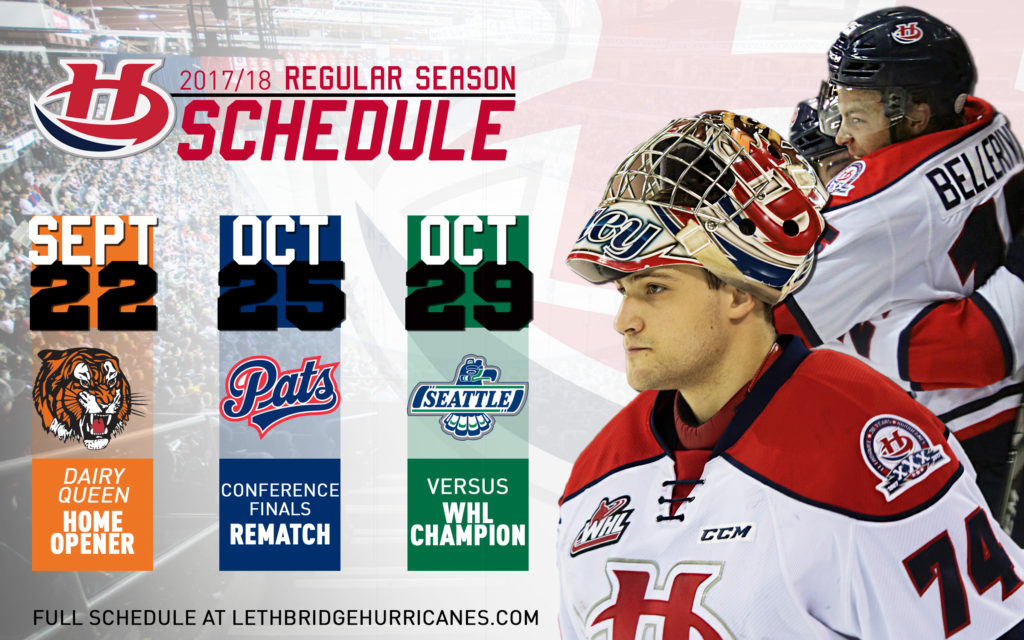 Lethbridge, AB – The Lethbridge Hurricanes Hockey Club, in conjunction with the Western Hockey League, have released the 2017-2018 regular season schedule which will begin on Friday, September 22nd when the Hurricanes will welcome the Medicine Hat Tigers to the ENMAX Centre in the Dairy Queen Home Opener.

The ‘Canes will play a total of 72 regular season games, including 36 home games at the ENMAX Centre and 36 games on the road. In 2017-2018, the Hurricanes will face their rival Tigers seven times (four at home, three away), including three home-and-home sets. The ‘Canes will also face the Kootenay Ice on seven occasions (three at home, four away) while facing the Calgary Hitmen, Edmonton Oil Kings and Red Deer Rebels each six times (three at home, three away).

Of the 72 game schedule, the Hurricanes will play a total of 32 games against Central Division opponents, 24 against the East Division, 11 against the BC Division and five versus that US Division.

The Hurricanes will begin their five game ENMAX Pre-Season schedule on Friday, September 1st, 2017 when they host the Tigers at Nicholas Sheran Arena. Season Tickets for the 2017-2018 season are on sale and can be purchased by visiting the ENMAX Centre Ticket Centre or by calling 403-329-SEAT (7328).