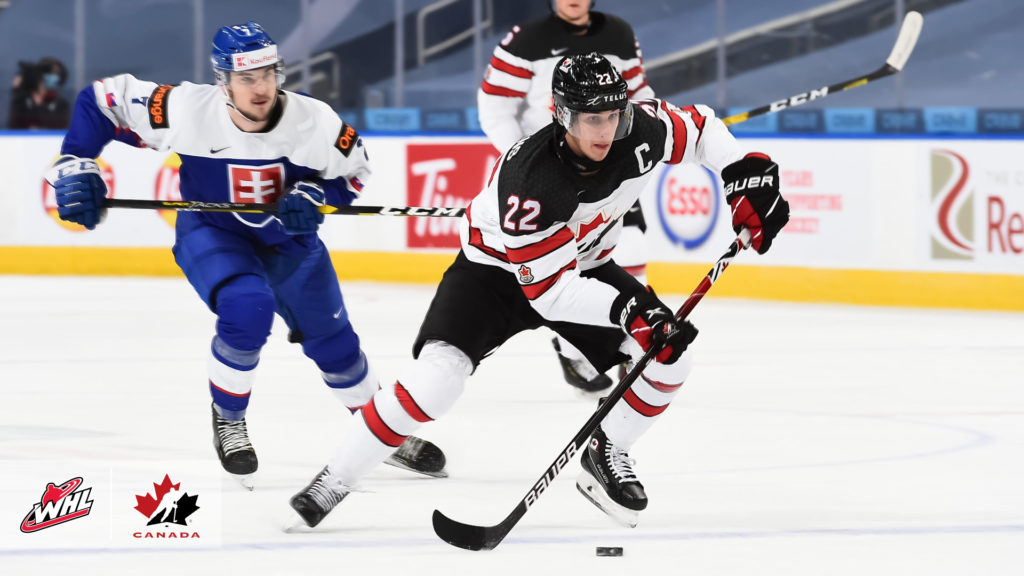 Edmonton, Alta. – Dylan Cozens hit Phil Tomasino with a stretch pass and the Oshawa General found the back of the net for the game-winning tally as Canada slipped past Slovakia by a 3-1 margin on Sunday night at the 2021 IIHF World Junior Championship.

Cozens, the Lethbridge Hurricanes star, took to the ice sporting the captain’s ‘C’ for the first time at the event after teammate Bowen Byram of the Vancouver Giants donned the ‘C’ on Saturday night.

For Cozens, a prospect of the Buffalo Sabres, he built on his tournament scoring lead with the helper on Tomasino’s winner. With seven points (3G-4A) in two games to start the event, the Yukon-born Cozens sits two points ahead of forward Trevor Zegras (3G-2A) of the United States.

Canada opened the scoring early in the first period as defenceman Jordan Spence (Moncton Wildcats) found the back of the net.

Tomasino’s strike came with 3:35 remaining in regulation, and it was a good thing it did because Kingston Frontenacs forward Martin Chromiak scored with 1:24 to go, making it a 2-1 game. Jack Quinn of the Ottawa 67’s iced the outcome, depositing the puck into an empty net with 13 seconds to go.

With the win, Canada moves to 2-0-0 to start the 2021 IIHF World Junior Championship. Next up, they take on Switzerland on Tuesday, December 29 at 4 p.m. MT.

World Juniors News & Notes: Brandon Wheat Kings defenceman Braden Schneider missed Sunday’s game vs. Slovakia, sitting out due to a one-game suspension handed down by the IIHF as a result of a Checking to the Head major incurred on Saturday vs. Germany… Everett Silvertips goaltender Dustin Wolf shut out Austria on Saturday night, turning aside 10 shots…