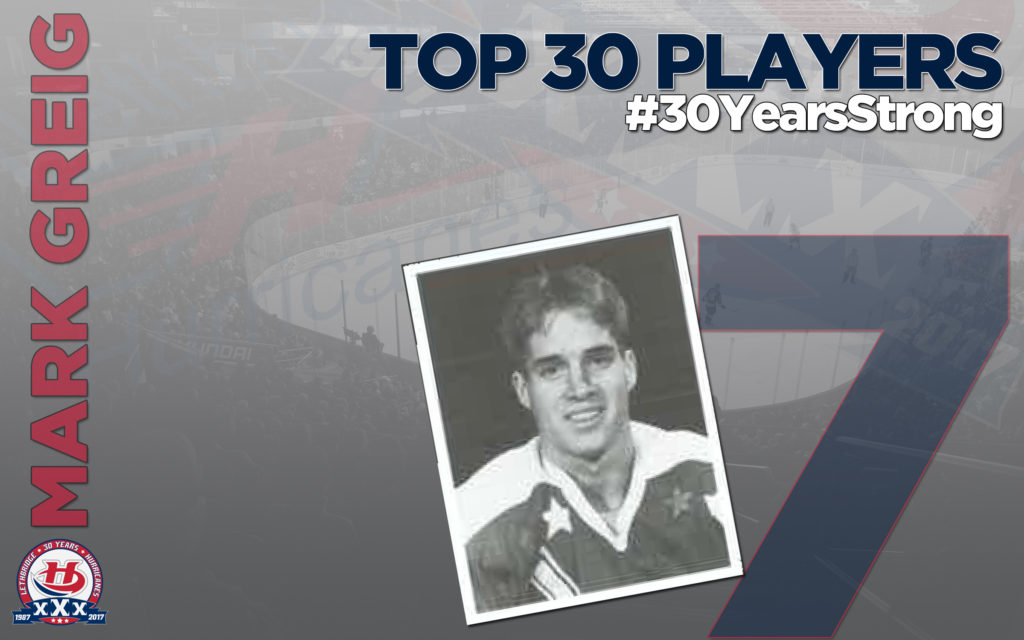 Mark Greig played for the Lethbridge Hurricanes for three seasons from 1987 until 1990.

Greig’s best offensive season came in his final year in 1989-1990 where he racked up an impressive 135 points (55g-80a) and 149 penalty minutes in 65 games finishing third in team scoring that season. The right-winger racked up 32 points (11g-21a) in 18 playoff games in the spring of 1990 helping the Hurricanes to the WHL Final for the first time.

Greig became the first ever Hurricane’s player selected in the first round of the National Hockey League Entry Draft when the Hartford Whalers selected him 15th overall in the 1990 draft. He went on to play a total of 125 NHL games with the Whalers, Toronto Maple Leafs, Calgary Flames and Philadelphia Flyers where he picked up 40 points (13g-27a).

He also suited up in a total of 606 American Hockey League games with the Springfield Indians, St. John’s Maple Leafs, Saint John Flames and Philadelphia Phantoms where he collected 659 points (247g-412a) along with 848 penalty minutes. Greig went on to play four seasons in the DEL in Europe before retiring as a player with the Iserlohn Roosters in 2007.

Greig has been an Amateur Scout for the Philadelphia Flyers for last nine season. He is currently an Assistant Coach for the Lethbridge Golden Hawks Bantam Triple-A team.