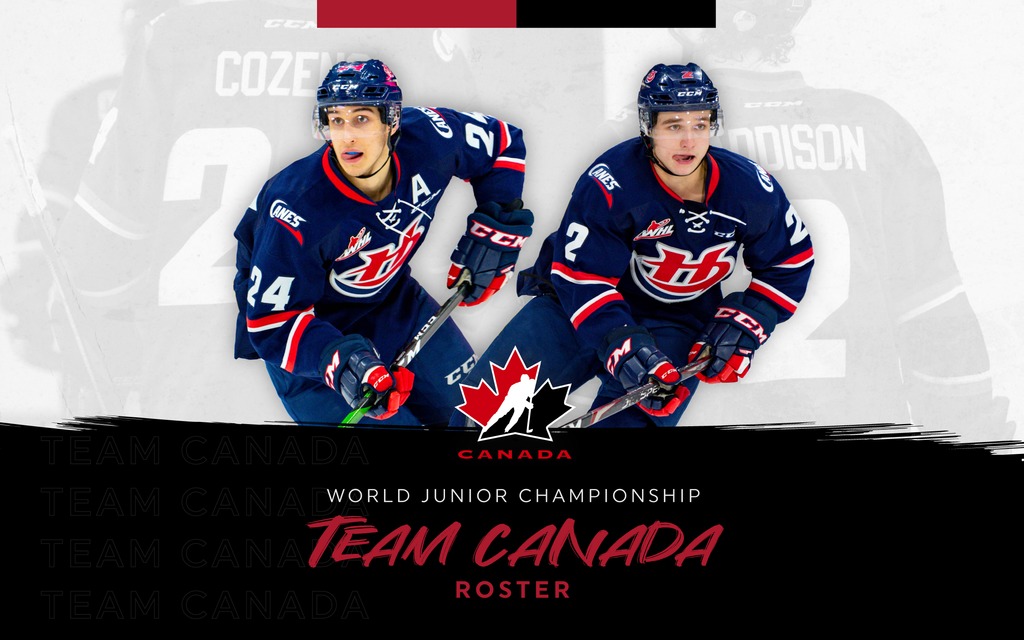 Addison, 19, was one of seven defenseman selected to the team. The Brandon, Manitoba product who was a second round draft pick of the Pittsburgh Penguins in 2018 has represented Canada at the Under-17 and Under-18 levels helping Canada capture a gold medal at the 2018 Hlinka Gretzky Cup when he had six points (2g-4a) in five games. So far this season, Addison has recorded 29 points (7g-22a) along with 28 penalty minutes in 31 games.

Cozens, 18, was named as one of 14 forwards. The Whitehorse, Yukon native most recently represented Canada at the 2019 World Under-18 Hockey Championship last spring where he collected nine points (4g-5a) in seven games. Cozens has represented Canada at both the Under-18 and Under-17 levels. The seventh overall pick by the Buffalo Sabres in the 2019 National Hockey League Entry Draft has totaled 46 points (20g-26a) in 30 games this season for the Hurricanes.

Addison and Cozens become the first Hurricanes players to represent Canada at the World Junior Championship since 2009 when Zach Boychuk helped Canada win a gold medal in Ottawa. They join Wes Walz (1990), Lee Sorochan (1995), Brent Seabrook (2004 & 2005) and Boychuk (2008 & 2009) as the only ‘Canes in history to suit up for Canada at the tournament. The last Hurricane to attend the World Junior Championship was Luca Sbisa (Switzerland) in 2009.

Canada will begin the World Junior Championship on December 26th against the United States in Ostrava and Trinec, Czech Republic. Full coverage of the tournament will be provided by TSN/RDS.

The Hurricanes return to action on Saturday when they welcome the Calgary Hitmen at the ENMAX Centre at 7:00pm in the first of a home-and-home set. Tickets for the game can be purchased by calling 403-329-SEAT (7328), online at www.enmaxcentre.ca or by visiting the ENMAX Centre or Yates Memorial Theatre Ticket Centre’s.