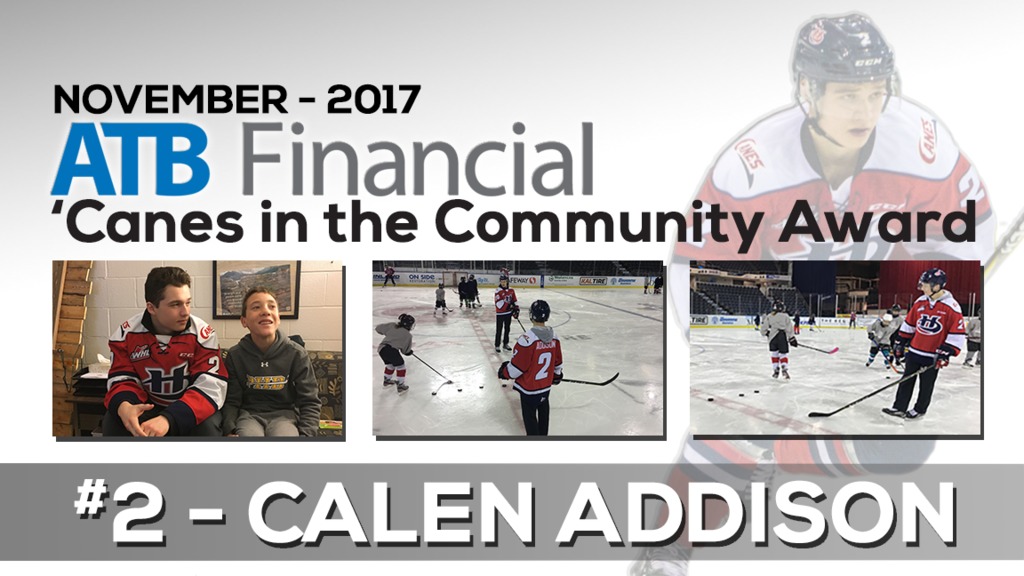 Lethbridge, AB – The Lethbridge Hurricanes Hockey Club, in partnership with ATB Financial, have named Calen Addison the recipient of the ATB Cane in the Community Award for the month of November.

Addison, 17, has been involved in countless community events in the early part of the season. He has volunteered his time attending Paterson School on numerous occasions helping with the Hurricanes Reading Program. Addison also participated in the ATB Financial Skills Session where he helped tutor young hockey players, along with his teammates.

The product of Brandon, Manitoba has also volunteered his time at the CIBC Run for the Cure as well as a home visit along with three other teammates for a Lethbridge Minor Hockey Association fundraiser so far this season.

Addison, who is in his second year with the Hurricanes, has excelled on the ice as well as off. Addison is in the midst of a career-year having accumulated 32 points (6g-26a) in 27 games this season. He leads all Hurricanes defenseman in scoring and sits third in team scoring. The sophomore rearguard sits fourth in all defenseman scoring in the Western Hockey League.

ATB Financial is proud to present Calen Addison with this month’s ATB Cane in the Community Award. ATB Financial specializes in personal banking, business banking, investments and so much more. Visit an ATB Financial branch today for all of your financial needs; you have goals, ATB Financial has the assists!

The Hurricanes return to action on Wednesday when the ‘Canes welcome the Red Deer Rebels. Tickets for both games can be purchased by calling 403-329-SEAT (7328) or by visiting the ENMAX Centre Ticket Centre.