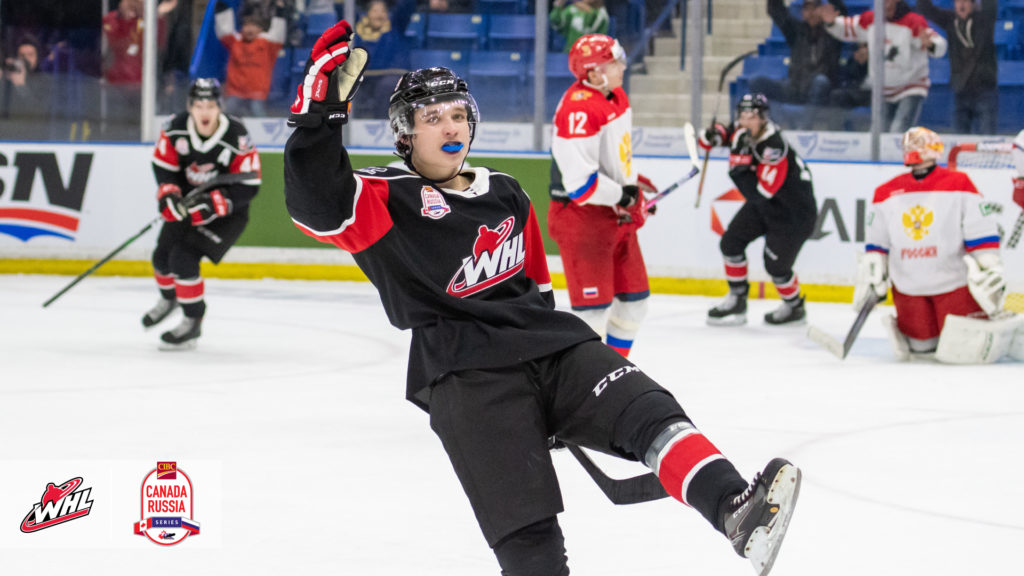 It took some extra time, but Team WHL delivered a 2-1 win in Game 5 of the 2019 CIBC Canada Russia Series to give the Canadian Hockey League a lead in the annual series.

“It’s a pretty special feeling,” Addison said. “Bo dropped it to me, I just shot it and it went top corner, so it was a pretty good feeling.”

Saskatoon Blades goaltender Nolan Maier shone in front of his hometown crowd, stopping 25 of 26 shots to earn the victory. He also picked up a secondary assist on the game-winning goal.

Team WHL did well to fend off the pressure of the Russian attack in the contest. Despite the wave of chances, Russia managed just a single goal from the first two periods as Maxim Sorkin struck 5:41 into the game on the power play.

Russia brought strong goaltending to the game as well, with Amir Miftakhov turning aside all 14 Team WHL shots through 40 minutes and finishing with 24 saves. His highlight came in the first as he robbed Lethbridge Hurricanes forward Dylan Cozens (Buffalo Sabres) on a one-time chance.

“I thought we got momentum from our late power play there and it carried into the last couple seconds of the game,” Byram said. “Hopefully we can carry this momentum into tomorrow night’s game.”

Meanwhile, Team WHL’s forwards pressed for chances as time dwindled down in regulation. Early in the third period, Addison fed a pass in front to Everett Silvertips forward Cole Fonstad (Montreal Canadiens). The Estevan, Sask. product had a wide-open net and the one-timer labelled, but had the puck unfortunately hit his skate instead.

Team WHL would eventually be rewarded late in regulation with Maier pulled.

At the top of the offensive zone, Byram took a pass from Cozens and wired through traffic to tie the game up late.

That set the stage for overtime, where Maier came up huge again, this time stopping a chance in tight by a streaking Ilya Kruglov.

“It was really exciting for me just being at home,” Maier said. “It was surreal and super fun to play in, especially when we get the two points.”

The save itself came at a critical juncture as Byram took the puck back up ice and dished it back to Addison. As Byram drew his defender with him down low, Addison used the open space to skate in and wire a shot past Miftakhov to bring the game to a thrilling conclusion.

Heading into the sixth and final game of the series, the CHL enjoys an 8-7 advantage. The game will be played at the Art Hauser Centre in Prince Albert, Sask. with puck drop at 6:30 p.m. CT and viewable on Sportsnet 360.

Game 6 of the 2019 @cibc #CANvsRUS Series comes your way on Thursday from Prince Albert only on @Sportsnet! #WhereGreatnessBegins pic.twitter.com/84v6U1jWog