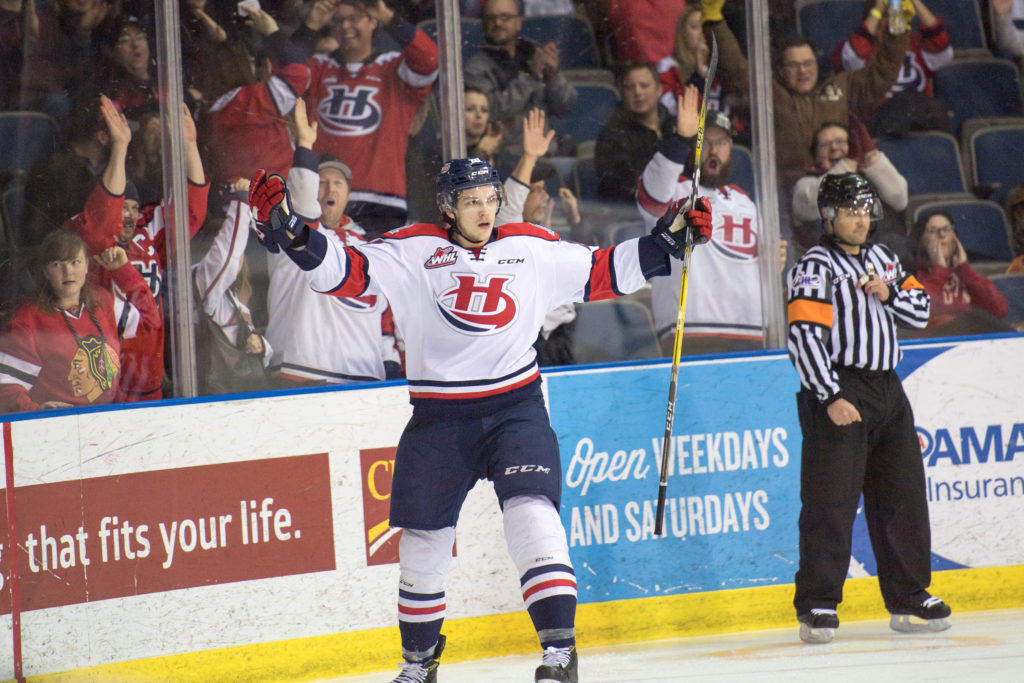 Lethbridge, AB – The Lethbridge Hurricanes made it a clean sweep on Family Weekend as the ‘Canes earned a 6-2 win Saturday night over the Saskatoon Blades.

The ‘Canes were led by the overage line of Tyler Wong, Zak Zborosky and Matt Alfaro as all three had four points in the as they combined for 12 total and accounted for five of the Hurricanes six goals on the night. Alfaro led the way with his first WHL hat-trick and as assist in the game.

The Hurricanes came out firing early in the first period with a handful of good looks in the first couple of minutes. At the 4:20 mark of the opening frame, Saskatoon’s Cole Johnson made contact with Ryan Gilchrist and was issued a five-minute major and a game misconduct for goaltender interference. On the ensuing power play, the ‘Canes struck for one as Alfaro tapped home his first of three in the game at the 5:08 mark – Wong and Giorgio Estephan picked up the helpers. Before the period was out, the Blades equalized as Logan Christensen jammed home a rebound for his 10th of the season to tie the game 1-1 after twenty minutes. The ‘Canes outshot the Blades 13-5 in the first period.

The ‘Canes continued to carry the play in the second period as they once again outshot the Blades 13-8 in the middle period. The Captain struck for his 42nd of the season as Wong buried a one-timer passed Blades netminder Brock Hamm at the 9:33 mark – Zborosky and Alfaro earned the assists. Just over six minutes later, Alfaro picked up his second of the night and 17th of the season to make it 3-1 ‘Canes – Zborosky and Wong picked up the helpers.

In the third, the Blades pushed as they outshot the ‘Canes 11-8 in the final twenty minutes. Saskatoon pulled within one as Tyler Lees netted his first WHL goal just 5:26 into the third period making it a 3-2 hockey game. However, the ‘Canes once again took over. Alfaro completed his first WHL hat-trick with his 18th of the season at the 8:08 mark while shorthanded beating Hamm with a back-hand shot to make it 4-2. Soon thereafter, the ‘Canes struck again as Brady Pouteau snapped a 70-game goalless drought with his first as a Hurricane at the 9:56 mark – Egor Babenko and Zborosky picked up the assists on the goal. The ‘Canes added another power play goal by Zborosky as he found the net for the 38th time as the ‘Canes went on to the 6-2 victory.

The Hurricanes outshot the Blades 34-24 in the hockey as they held the shot advantage for the third straight game. The ‘Canes went 2/6 on the power play and 6/7 on the penalty kill.

The ‘Canes continue their season-long four game home stand on Wednesday when they welcome the Moose Jaw Warriors at 7:00pm to the ENMAX Centre. Tickets are available by online, by calling 403-329-SEAT (7328) or by visiting the ENMAX Centre or Yates Ticket Centre’s.