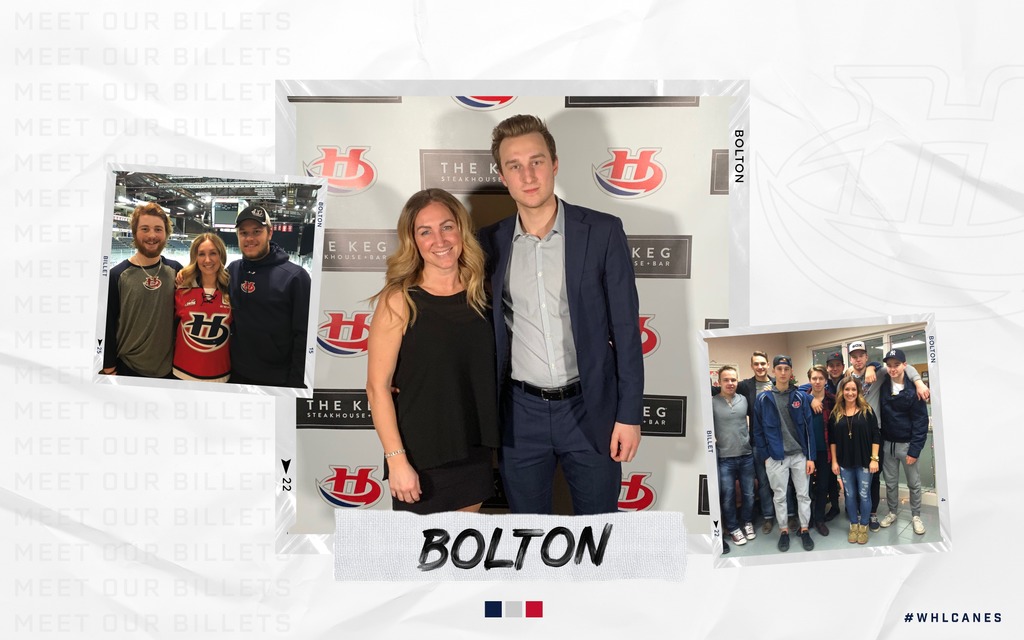 Fairly new to the billeting world, and now a billet alumna, Stacey Bolton started billeting in 2016 and finished this past season. She has now taken on a new role with the Lethbridge Hurricanes as the Team Education Advisor, helping players navigate and juggle their academics with the demands of playing major junior hockey.

Stacey is a teacher counsellor at Winston Churchill High School, where the players were attending school until just a few seasons ago when they moved over to Chinook High School. At that time, Stacey had a group of players in her advisor class who suggested she become a billet. Her initial reaction was “NO,” but after much thought, deliberation, and consultation with others she decided to give it a shot. So, how does she feel about that decision? “Best decision ever. I also think it’s special how it came full circle by having Davy [Brett Davis] come back at the end as a 20-year-old when he was one of my originals at school back when he was 16.”

Bellerive. She also billeted Nick Watson, Zane Franklin, and Scott Mahovlich. This is one of just a handful of billet homes without young children so what does a regular day during the season look like? “For me, it’s having more life in the house. People coming and going and sharing stories about their day. I’d often come home from work to a few guys napping on the couches with the fireplace on and snacks out. They definitely enjoy their online gaming and we had a few TV shows that we liked to watch together. Often times we had company from some of the others, mostly Vandy [Ryan Vandervlis] and Addy [Calen Addison]. It really felt like one big family.” How about a game day? “Very structured. Each player has a game-day routine that is pretty strict. Usually, it’s waking up, heading to the rink, coming home for a pre-game nap, pre-game meal (which can be two different meals depending on what each player prefers), music blasting then the tradition of not saying ‘good luck’ but instead ‘play hard, head up in the corners’ before they head to the rink again for the game. Afterward, it’s a post-game meal and debrief about the game.”

Each day of billeting is different Stacey says, “depending on the day, sometimes it is like having younger brothers and other days like having older ones. Typically, it’s like a strong friendship where we help each other out with life in general. I have learned so much from them and hope they took a little something away from my guidance as well.” An athlete, a high school teacher counsellor, a coach – we’re sure Stacey has a lot of guidance to provide her billets and their teammates. It also allowed her to create strong bonds with her billets’ families. “They are all like an extended family. You can go through so many different life experiences that it brings you that much closer. It takes a village. I am so grateful for the friendships that have developed over the years. They are ongoing relationships that carry much further than just supporting the boys while they are here.”

The highs and the lows of our personal lives are all a two-way street; you experience it yourself and it impacts those around you. Billeting is no exception. Being a billet parent often means you are giving advice or a listening ear, but billet players can unknowingly help billet families discover more about themselves. “Some of my biggest moments of growth happened over the years I billeted. I have had some of my highest highs and lowest lows. I think the fire incident when the boys were badly injured is probably one of the most impactful moments and I think still affects all of us involved to this day in different ways. I will never forget the call I received from Jordy when he first got to the hospital that night. I couldn’t get up there fast enough. Going through Scotty’s loss was another big one that really impacted our household. It really doesn’t take long to care so deeply for these guys you really feel their pain when they experience it then you witness their resilience when regardless of what’s going on in their lives, they lace up and give it their all in a game. Then there are the happier, special times. [Tyler] Wong’s wedding. What. A. Time. I was fortunate to be a part of that as he married one of my volleyball players, and now a close friend. I’ve been privileged to be a part of so many experiences these guys have off the ice where I got to witness the true brotherhood that exists on the team.”

Read on to hear some fun stories from Stacey!

So many great memories! A few of my favourites include: flying out to Vancouver and jumping in the car to drive back [to Lethbridge] with Jordy before the season started. It’s never a dull moment with that kid so you can imagine what a 20+ hour car ride would be like. Another was when Zane found what we thought was a huge rat in our basement window. Being a farm kid, he was a champ in the situation but Jord and I had a different reaction…much higher pitched. And yes, there is a rat hotline, and we called it. Another favourite was adopting my cat, Harli, with Brett. I think she liked him more than me at first. And of course, watching Big Brother episodes with Scotty.

It always meant a lot to me when they graduated high school because that’s where my connection started with them, it was important to celebrate that success as it’s a special milestone. I understand how hard it can be for them in school as they have such a crazy schedule during the season so they have to work hard to be successful. And of course, the NHL draft and/or signing to a team. I think I still have Jordy’s original Penguin’s NHL contract he signed in my kitchen drawer that I should probably get back to him.   Knowing that is always their “Plan A”, it’s nice to see their excitement when their dream comes true.

Butter Chicken, sweet and sour meatballs with rice, banana chocolate chip muffins would be some of the top-rated in our house.

Food! Haha, I remember right before I started billeting, the first time Pete was coming to my house, Jordy had advised me to actually fill my pantry as I didn’t have much in there at all. He wanted it to look like I actually ate and that my house would be a good place to live with lots of food choices. It has been filled ever since. One of the key pieces was definitely protein powder.

I keep in touch with all of them. We have gone through some pretty big moments together. It’s important to me to make sure they all know how much they mean to me and how I appreciate the time I had with each of them. I was able to go out to Vancouver and Vernon a couple of times and spend some time with the Bellerive’s during the summer so it was really cool to be able to see where he grew up and meet some of his non-Hurricane friends and other family members. I was even able to go watch one of his training practices so I saw firsthand how hard they keep training in the off-season.

Do it! Just remember hockey is only one part of them. Supporting them as a whole person is important to their development and success. It definitely adds life to your home.