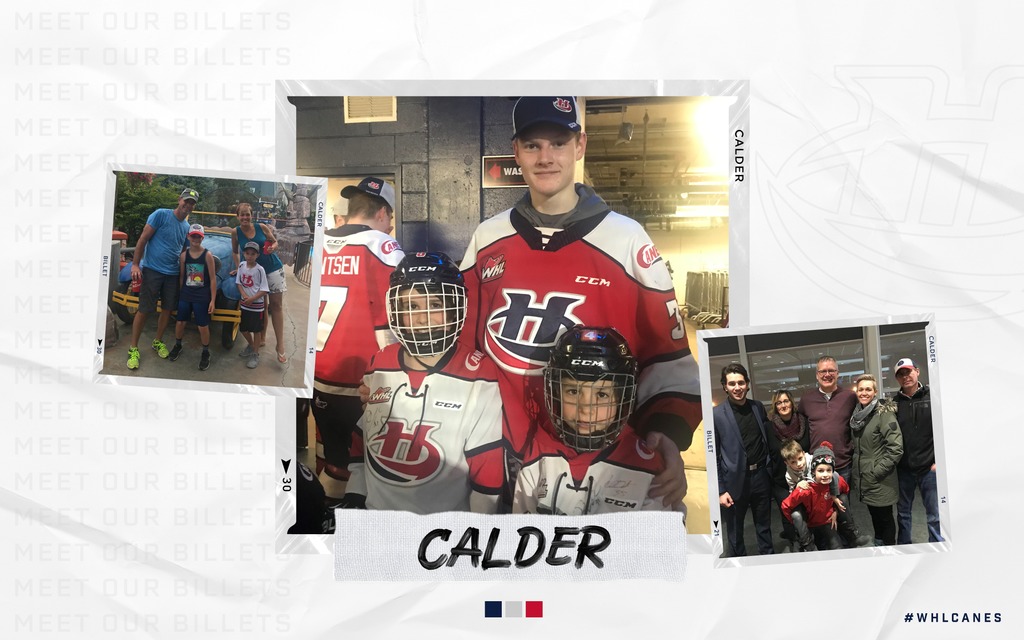 Darren and Meghan Calder have been billeting for 14 seasons, since before their sons Macai (11) and Lachlan (10) were born. Home last season to Bryan Thomson, the Calder’s have also been home to a long list of Lethbridge Hurricanes alumni, including: Ryon Moser, Albin and Axel Blomqvist, Pavel Skumatov, Devan Fafard, Ryan Vandervlis, and Jordy Bellerive. They were also briefly home to Tyler Strath, Hayden Clayton, Dylan Ashe, and Jacob Boucher.

Billets at the Calder home create an unforgettable bond with their billet brothers, Macai and Lachlan. Two lucky boys who have had their older billet brothers help out at their hockey practices, pick them up from school, and battle in numerous mini-sticks games. This was all something Ryan Vandervlis was known for, he also had a tradition of picking the boys up from school and taking them for lunch on Ryan’s last day in Lethbridge each season. This past season, Bryan Thomson went to their minor hockey practices and cheered them on at games when he could. He was also known to take the boys for Slurpees and treats from time to time. But beyond that, Bryan is still a kid at heart, he went and bought the biggest Nerf guns possible to make sure the Nerf gun wars in the Calder house are spectacular.

We remember seeing many photos, videos, and hearing stories of former Calder billets and their activities with their billet brothers. Their trampoline is a big hit at the household. If the weather is nice you are almost guaranteed to find the boys in the backyard, jumping on the trampoline. However, the relationships built between billets is so much stronger than just spending time with their billet brothers, it doesn’t end when a player’s time is finished in Lethbridge. The relationship continues. Meghan, Darren, Macai, and Lachlan have been to Sweden three times. Sweden, of course, is the home of their former billets, Albin and Axel Blomqvist. Their favourite memories there include attending Albin’s wedding, travelling around the country with their family, and the time Darren watched the World Juniors in Malmo with Albin and the Blomqvist family – we can’t blame them!

In the off-season, Meghan and Darren are known to hit the links with former billets who visit Lethbridge. They are also known to visit players and their families in their hometowns from time to time. That relationship with a player’s family starts at the beginning of each season. Meghan describes the relationship with a player’s parents as “vital” saying, “We are their family when they can’t be at home so we feel it is so important to have a relationship with their parents and families. We have hosted families from Sweden. We start every season with a brunch or meal to get to know the boys’ families. We work hard to touch base regularly, especially if their families come to watch. We continue to be in touch after the boys move onto bigger, better things. We have had some of their siblings stay with us in the off-season if they need a place. We continue to communicate on social media.” Billeting is so much more than providing a temporary home for these players. Among other things, it’s also an opportunity to build long, lasting relationships with the billet player and his families.

So, how did the Calder’s become billets? “Marilyn Roser (Kris and Mitch Versteeg’s mom). I taught with her and there was a joke that I didn’t like babies but would rather adopt teenagers. Marilyn knew we loved sports and asked if we would be interested. I said I thought we would. She called Matt Kabayama [former Hurricanes assistant coach] who called me. They asked us questions, checked our house, and we had a player (Ryon Moser at 16) move in the next day! We have billeted ever since.” Fourteen years later, we wager numerous players and their families are glad Meghan and Darren gave billeting a shot.

Read on to hear some fun stories from the Calder’s!

Though there were many moments that stick out when the players are in Lethbridge, some of the Calders’ favourite memories are seeing the success their billets go on to have after junior hockey. When asked what their favourite memory with a billet was, Meghan said:

And above all that? “We have great memories of Dylan Ashe. He was an amazing young man. He had a truck he had rebuilt and was so proud of. Our boys thought it was the best.”

To mark the return of hockey season, you’ll find the boys playing mini-sticks on the trampoline every year.

Fun fact: Meghan had no idea who “Tommy” was when they first started billeting Bryan. An easy confusion as you’ll pretty much never hear “Tommy” referred to as “Bryan” at the rink or around his teammates.

Not a favourite meal but every player has had favourites like: Albin and Axel – ketchup on everything. Ryan Vandervlis – Frank’s hot sauce and ice cream with milk and chocolate chips. Bryan – HP sauce on meat.

Crazy…always. We get up early and go to bed early. School. Home. Eat all together most nights. Hockey and other activities. Make sure homework is done (or at least make sure I ask about it). The boys always make fun of how early we go to bed.

Weekdays – same as above except I get pre-game meal prepped so it can be cooked while the boys sleep. They just need to turn on the oven and the rice cooker. Weekends – usually a big breakfast and then the same as above. Also depends if our boys have games. We like to get to the rink early to watch home games.

Yes! All of them via social media. We have been to Sweden three times. We went to Victoria and Moose Jaw when Axel was traded. We have watched Tyler Strath play for the Copperheads. We watched Devan and Ryon play for their respective university teams. We have visited the Bellerive’s at their place in Vernon. We have visited Vandervlis’ in Red Deer. We visited Ryon Moser’s family in Calgary. Pavel has asked us to come to visit Russia. Darren has don golf trips with Geza Nemeth.

We contact all the boys on their birthdays and at Christmas.

It’s awesome! Do it. We love how important each of the players is to us and our boys. Our boys have never lived a season without having billet brothers.

One of my best memories was being honoured at a game and having Ryan [Vandervlis] come to be part of the evening while having some of my former boys share a video about their time at our house. It’s always great to see the “boys” and how successful they have become.

I have some absolutely hilarious stories that I know I will share at the boys’ weddings but most of them aren’t safe to share with the public. LOL

Now? Darren and Meghan are learning now how to be goalie parents. “That is something exciting for sure.”