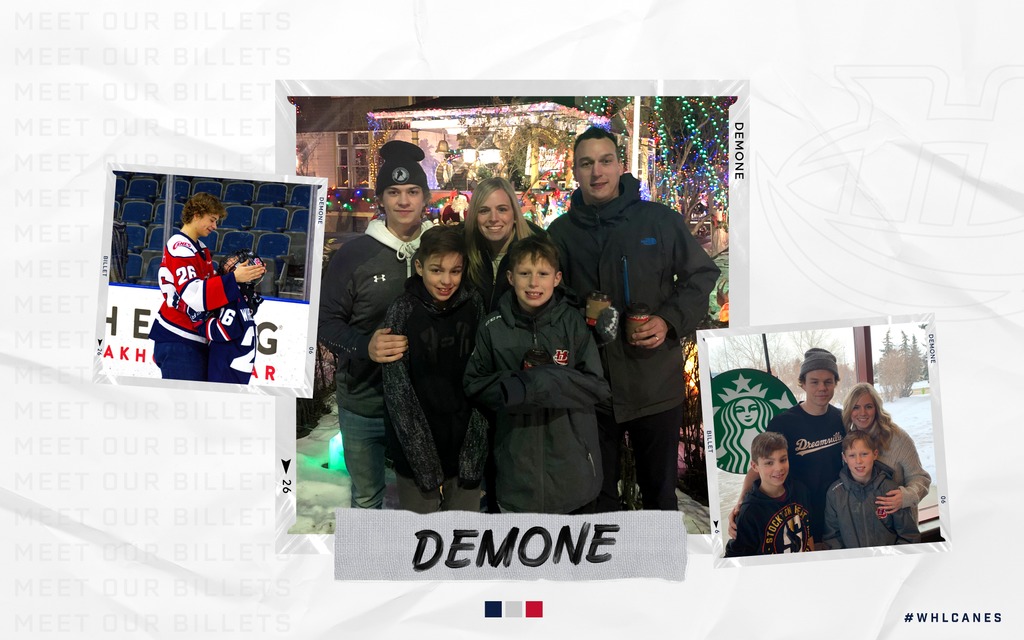 Playing an important role in our organization, we would like to introduce you to our billet families – beginning with the DeMone family.

Some of you may remember Jim DeMone as he and his K9 partner, Arco, joined the Lethbridge Hurricanes organization in August of 2013 as the team’s liaison officer. As the liaison officer, Jim advises players on such things as drugs, alcohol, gambling, hazing, social media use, and other community issues that affect the players. DeMone is a former WHL’er playing four seasons with the Portland Winterhawks (1998/99-2000/01) and the Prince Albert Raiders (2000/01-2001/02). He accumulated 43 points (7g-36a) in 232 games along with 590 penalty minutes. Following his WHL career, DeMone jumped around leagues and countries playing with the Atlantic City Boardwalk Bullies in the East Coast Hockey League (ECHL), University of Lethbridge Pronghorns, Manitoba Moose in the American Hockey League (AHL), and the Hull Stingrays in the Elite Ice Hockey League (EIHL) in the UK to name a few. After completing his hockey career, DeMone decided to pursue a career in policing and has been with the Lethbridge Police Service for over ten years.

When asked why the family decided to billet Kristen said, “We wanted to billet to give back. Jim played in the WHL and always had great billets. In fact, his billets from his days playing in Portland are family to us and we see them all the time. I love the relationship he has with his billet mom and always thought it would be a neat experience. He always said having good billets made such a difference for him and his experience and wanted to pay it forward”. The DeMone’s started billeting when the team was going through a transition and needed some extra billets. At the time, one of their sons was playing on a team with former head coach, Drake Berehowsky’s, son and was asked if they would be interested in billeting. Because Jim just started working as the team’s liaison officer, they decided it would be a good fit and signed up to be temporary billets who would provide a home for players for a few days as needed but that quickly turned into full-time billets.

Over the course of their six billet years, they have been home to Ethan King, Brett Kitt, Andrew Nielsen, Calen Addison, Brendan Stafford, and most recently – Chase Wheatcroft.

With two boys of their own, who play hockey, you can imagine their busy household during the hockey season. Kristen describes it as “Complete chaos…Jim works shift work and Jake and Owen both play competitive hockey so we are always on the go! Hockey equipment lives at our front entry, school work all over our kitchen counter and table, usually you walk into the sound of the kids/billet kid yelling while playing mini-sticks”. Sounds pretty on brand for a hockey home, if you ask us.

On game day though, there is more structure and routine in the house. “I will say that if we are home, it usually consists of me (Kristen) whisper-yelling at the kids to be quiet while pre-game nap is going on. This past year, I would try to get up early to have breakfast ready for Chase before he headed out for morning skate. He’d usually come home around noon after hitting Subway with Arny (Joe Arntsen) and head down for a nap. I’d make pre-game meal (usually chicken or salmon with rice and veggies), Chase would eat around 3:30 and hang out with the boys for a bit before heading down to get ready. He would always leave around 4:30 for the rink”.

Most billet families attend the Hurricanes home games but this is heavily dependent on what they have going on with their own family. A little more challenging for Kristen, Jim, Jake, and Owen – with both boys playing competitive hockey and Jim assisting with coaching, the family travels quite a bit during the season. Nonetheless, they are there to support their billet player however they can. Outside of hockey, close relationships are built with the player’s family as well and so memories are created, traditions and celebrations are started – each unique to the families and players. We had a few other questions for Kristen, read on to find out what she has to say about her billeting experience.

I have two that make me laugh every time I think about them:

When Calen was living with us, we went for lunch at asushi restaurant. My youngest son,

Owen (a bit of a wild child), was goofing around and smacked a full glass of pop that went right into Calen’s lap and soaked him. We couldn’t help but laugh and he was a good sport about it!

Anyone who knows Chase, knows he is quite the character. He was having a SuperDeker challenge and trying to hit 60 on it for a box of Smarties. After about an hour of trying, he finally did it and was so excited, over the top excited. Still on a high from his big feat earlier in the night, he was coming up for his nightly bowl of cereal when he decided to jump up and over the ottoman. Jump he did, and landed right onto the metal holder for the SuperDeker band. He cried out in pain and all I could do was laugh and give him a hard time. The next day he came upstairs and had the biggest bruise on the bottom of his foot. I guess it really did hurt…

We have quite a few traditions with our billets:

Most of our traditions happen around Christmas time:

In the past, we’ve also decorated Easter Eggs (this usually requires a lengthy playoff run). It’s hard to move away at a young age into a strange home and deal with all the mounting pressures that come with juggling hockey, school, and life. I think they really feel it around the holidays so I feel it is important to celebrate the holidays with them, to give them that feeling of family and know that they are loved and supported.

Probably depends who you ask but I’ve never had any complaints on pre-game meals or anything Jim has cooked on the Traeger.

Cereal. Copious amounts of cereal. Most of the boys we’ve had would always come up for a late-night bowl of cereal. Now my own boys are doing it too, thanks guys!

I have not really heard from most boys for the first few years after they’ve moved on but once they get a little older, I usually start to get the “Thank you for everything you did for me, I had no idea how much work it was until now” texts. I would say, I have heard from, and seen, Andrew Nielsen the most. I was fortunate to visit him in Toronto a few years ago and watch him play for the Marlies (I cried my eyes out when it was time to leave, poor kid). He also came down the year they won the Calder Cup and brought the cup to our house which was such a cool experience for our kids.

To be honest, it is a lot of work, sometimes thankless and an emotional roller-coaster but 100% worth it if you’re in it for the right reasons. You need to be committed to helping that player succeed not only on the ice but in life.

We’ve loved each of the boys we’ve had in our home as if they were our own kid and we have never regretted signing up to become a billet!