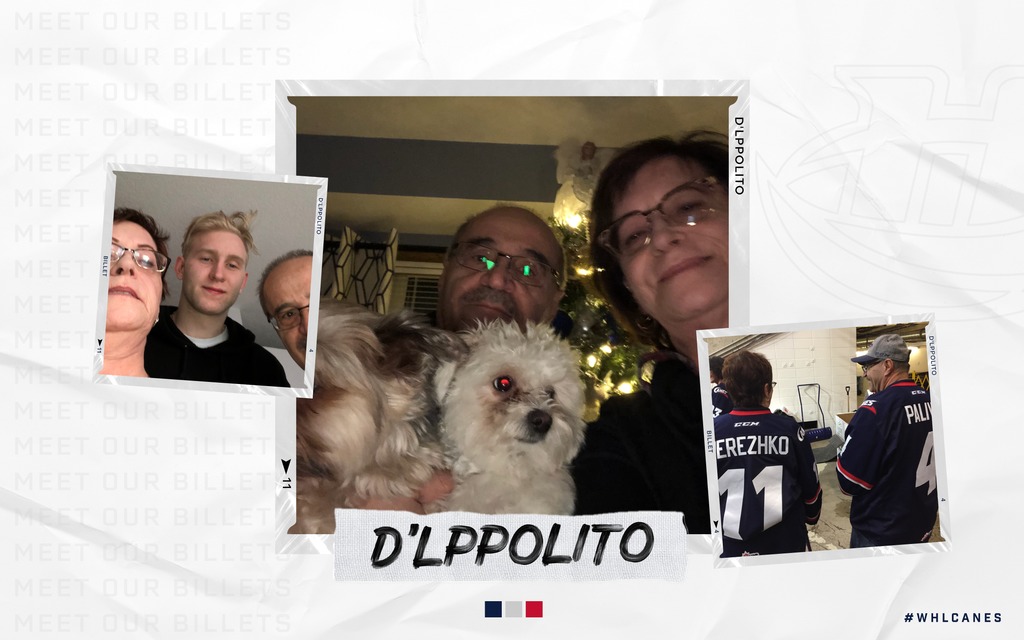 A second-time billet, Gail and Silvano D’lppolito are in their fourth year of billeting. The first time around, they billeted for about five years in the 1990’s and you bet we’ll be talking about that today!

Gail, Silvano, and their dogs Kricket and Lola were most recently home to Danila Palivko, the D’lppolito’s also billeted Igor Merezhko, and Adam Hall (among others). In the 1990’s they housed Domenic Pittis.

Having billeted two European players, Gail says they “have received wonderful cultural gifts from Danila and Igor’s families” and have returned many Canadian gifts as well. Including, you guessed it, lots of maple syrup a favourite for the Palivko family. Gail shares that players are typically shy upon arrival but eventually relax as time goes by, “they are always respectful and polite. The boys seem to stick to themselves for the most part but come up for meals and to watch an occasional hockey or soccer game with Silvano,” which may not be all that surprising because we hear soccer, or as they call it across the pond football, is a pretty big deal.

Seeing as on this most recent billeting adventure, the D’lppolito’s have primarily been home to our import players, Gail says she hasn’t had much contact with Danila or Igor’s families because they are so far away, the time difference, as well as language barrier. However, she shares that they have a great relationship with Adam’s parents and did with Domenic’s parents too. She says she swaps the occasional text with Chris Hall, Adam and Justin’s mom, when there’s big news about Adam. Gail does keep in touch with Igor who “has friended me on Facebook and has texted me several times to see how things are and wishes he was here.”

What was it liking billeting in the 90’s? Well, Gail (who is a R.N. B.N.) says “it was a rougher game back then so there were more stitches and injuries. Though Igor had more stitches and injuries than anyone else, then or now.” Rules seemed a little laxer in the 90’s so the players had a little more flexibility, if you will. One of the biggest differences seems to be in player nutrition, which certainly makes sense as more studies have been done over the years allowing for more education to be shared. In the 90’s, “they didn’t set out specific nutritional guidelines. [Players] basically ate what was put in front of them. There were no shakes to prepare and their pregame meals were basically carbs and no protein. Spaghetti and no chicken.” Speaking of spaghetti, Gail recalls “Domenic used to only eat his grandmother’s spaghetti sauce so I always had several baggies of it in my freezer. Also, our love bird would steal it off his plate given the chance and get sauce all over its beak.” Silvano used to play in a band and would usually have a gig on New Years Eve, so Domenic and Gail used to have Game Boy tournaments on New Years Eve, ah the good ol’ days! Gail also recalls that “back in the 90’s the hockey players all came to our home with a phone and Game Boy. Now they all have a smart phone and Play Station. In the 90’s the coaches would randomly phone our homes to check that the boys were following curfew. Now it’s a little different with cellphones.” That’s right, technology has changed ever so slightly since the early 90’s. Gail shares another funny story about Domenic, “my husband had just bought his first stud finder when he was working on the basement and he was telling Domenic how it worked. He said that you put it against the wall and it beeped when it found the stud. As a demonstration he put it against Domenic’s chest and the thing started beeping like crazy! That was the only time I ever saw Domenic blush like a school girl! There was also an occasion where I had made a big pot of stew for dinner and half of the team showed up unknowingly in the afternoon and found the pot of stew simmering on the stove. When I came upstairs from putting a load of laundry in the dryer, the pot was empty and the players were thanking me for the snack!”

Read on to read more about the D’lppolito’s!

Birthdays are always celebrated with a special meal, cake and gift.

The boys come up for a shake and/or breakfast and leave for the rink until they come home before dinner. Dinner is ready when my husband gets home from work and then the boys usually go down to their rooms to play video games or do their homework, or stay up to watch TV, or go outside for puck practice. Some of them are more socially active than others while some spend most of their time at home.

The boys go to the rink after breakfast, and come back for their individual pregame rituals. Then it’s chicken and spaghetti time and they change and off they go to the rink. When Igor was here he always wore red socks to the rink, and Gail started doing the same as a good luck charm. Then it’s into ‘Canes jerseys and off to the rink for Gail and Silvano where they meet friends for the game. Before the boys leave, they are told to work hard, have fun and play safe (by Gail, the nurse).

Baked salmon and orange rice always get a thumbs up, but I’ve found that they usually devour anything that doesn’t move.

Mixed nuts, Goldfish crackers and juice boxes are the usual’s for road trips. (I don’t usually have them except when my six-year-old grandson is visiting).

How did you get started in billeting?

We used to have University students and decided that hockey billeting might be fun as we both enjoy going to the ‘Canes games, and earlier, watching our kids play.

Go for it. They are great kids who love the game and the ‘Canes organization has always treated us well.

Danila loves the puppies and they always go outside with him in the evening and chase his puck around. Danila’s feet get kissed by Kricket whenever he comes upstairs and he always takes time to scratch her ears in return.

Igor was the tough guy on the team but was a big softy around the house.

All of the kids that we had were offered a good education by the ‘Canes which impressed me very much, then and now. All of the kids have been well mannered and appreciated being on the team.