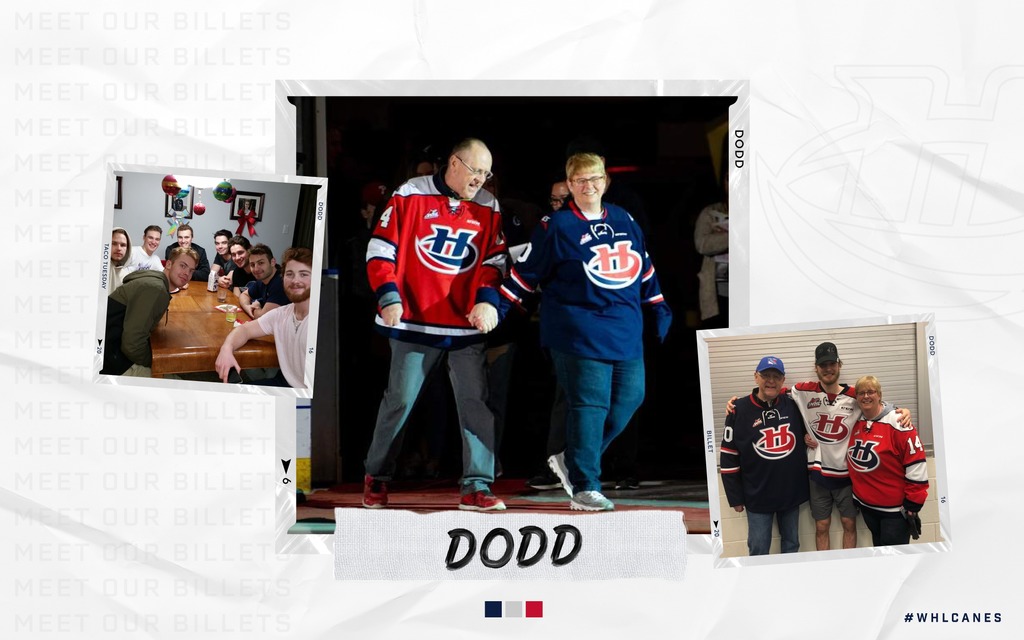 Billets for 16 seasons – yes, you read that right SIXTEEN! Kevin and Linda Dodd have been home to over 25 players. Their first billet, R.J. LaRochelle is now 33-years-old, and continues playing hockey in the Sask Valley Hockey League along with other WHL alumni such as Jesse and Alex Forsberg, Jesse Shynkaruk, and Hurricanes alumnus Jaimen Yakubowski.

A recent retiree, Kevin worked in the plumbing wholesale industry for over 45-years and retired in March (congratulations, Kevin!). Married for 42-years, Linda was mostly a stay-at-home-mom but also worked part-time in daycares and nursing homes. The Dodd’s have a six-year-old Lab named Sadie, and two daughters, Alisha and Meghan. Meghan and her husband, Rob, live near Calgary with their kids, Georgia and Rylan. Fun fact, they supply the beef for Linda and Kevin – an important note as this is the home of Taco Tuesday (we’ll get more into that later). Alisha and her husband, Kurt, live in Lethbridge with their sons Logan and Finn and have spent a lot of time with Kevin and Linda’s billet players over the years.

Billets of the Dodd residence celebrate special occasions with their entire family and players have always taken time to interact with their grandkids.

Holidays are celebrated together as well, including carving pumpkins for Halloween and building gingerbread houses at Christmas. A couple of former billets, Brandon Anderson and Brennan Yadlowski, even attended Alisha and Kurt’s wedding.

The Dodd’s are our first billet family without young children at home but game days don’t seem to change too much. When asked what a game day looks like in their home Linda said, “Justin’s game day starts with good breakfast and then he is off to the ENMAX Centre. When he returns, he goes down and rests until [it is time for] pre-game meal, his pre-game meal is chicken breast, quinoa, broccoli, and fruit. Then [he goes] downstairs to get dressed and leaves for the arena.”

A few seasons ago, the Hurricanes changed high schools in town but prior to the change, the Dodd’s lived close to the former school so they were often paired with younger players. Back then, a non-game-day meant players were eating breakfast, heading to school, then the rink for practice, and back to their billet homes. But even now that the older players are the ones living with the Dodd’s it seems the routine hasn’t changed too much – breakfast, practice, supper at home. “Justin will often go hangout with teammates then settle in for the evening back at home.” Settling in means more snacks and the occasional video game.

What about Taco Tuesday? The name we all know, but it takes on a different meaning at the Dodd residence. From conversations over the years with different players, Taco Tuesday is a rather serious affair. Limited to just the number of seats at the dining room table, billets of the Dodd home get a seat and there’s a rather intricate method for the rest of the teammates to earn the coveted invitation – including a substitution list should a player not be able to attend. This is a tradition not to be messed with on the team, “Brett Davis was late for Taco Tuesday one night and the boys at the table sent him to his room [a timeout, if you will]. They said you have to show respect for the ‘Taco Table’ – they take it very seriously,” said Linda. If you haven’t figured it out, Taco Tuesday is a weekly dinner at Kevin and Linda’s house consisting of: ten pounds of taco meat, two bags of tater tots, hard shells, soft shells, all the taco fixings, six litres of chocolate milk, a half-gallon of Gatorade, and it is finished off with ice cream. Let’s all take a moment to acknowledge Linda and Kevin’s commitment to Taco Tuesday because it sure sounds like a hefty task.

Linda and Kevin have formed great friendships with their billets’ parents and families. “This season we had great visits with both Justin and Nick’s parents, they are always welcome at the house. We are still in contact with the Skeoch, Davis, Elmer, Anderson, and Amson families to name a few,” says Linda. It’s not just the families they keep in touch with, but the players as well. The Dodd’s had breakfast with Jake Elmer a few weeks ago, he took the time to tape their grandson, Logan’s, new hockey stick. Having billeted for 16-years, you bet there have been some weddings over that time, “we also had the honour of attending our billets’ weddings – Carter and Laura Amson; as well as, Brandon and Erica Anderson,” Linda beamed. She also mentioned how special the bride and groom made them feel at each wedding, a testament to the bond built between billets and billet families.

Sixteen years is a long time to billet – that’s nearly half the time the Hurricanes organization has been in Lethbridge. So, how did the Dodd’s get started in billeting? “Our daughter, Alisha, had a college friend that was an intern with the Hurricanes and mentioned that we would make a good billet home. I didn’t even like hockey but Kevin thought it might be fun so I said I would do it for a season and the rest, as they say, is history. We are glad we continued to billet because it has given us the opportunity to provide a good, safe home to these players that are so far from home. Over the years we have watched boys turn into great young men and have made lifelong friends with their families.”

Read on to hear some fun stories from the Dodd’s!

Our favorite memories have to be carving pumpkins, building gingerbread houses with all of our family and the billets. We always make it a competition with lots of laughs. Another favourite memory for us is the Hurricanes Family Weekends, a time for billets, parents, and billet parents to get together and have a great time.

Ryan Kerr and Justin Leclerc dyed their hair for playoffs one year and they had it on the table, floor, and chairs. I still have some on the table that I look at and remember the mess.

I [Linda] drove Brandon Anderson to Calgary to catch a flight to the Washington Capitals training camp. It was a very early flight so we stayed at our daughter’s farm. Our granddaughter loved him and couldn’t get close enough to him, she even tried to share a booger with him and he just looked at her and said “no, thank you.” I got a Kleenex and saved him.

Taco Tuesday has become a big tradition at the Dodd residence. We’re not sure how it became such a big deal but it certainly did. It is a great time for our new billet to get to know some of the players on the team. This year Nick was the new kid at the table. It gave him an opportunity to get to know the team’s leadership group. It’s also a great time for the boys to get together, have Tacos, and get away from hockey. After tacos, they all go downstairs get comfy, watch TV, and have a quick nap. We buy a Dairy Queen ice cream cake for every special occasion and once a month we buy one for the taco birthday boys of the month.

The favourite meal I would have to say is tacos on Tuesday of course, but a big hit is breakfast for supper – eggs, meat, potatoes, toast, and fruit.

During the season some things we stock up on that we normally don’t are Gatorade and quinoa. We also keep the snack tray full of healthy snacks haha!

For someone thinking about becoming a billet we say to them it’s a very rewarding experience but you have to remember they are teenage athletes away from home, some for the first time. They need structure, good meals, and to be included in your family activities and given their privacy when they need it.