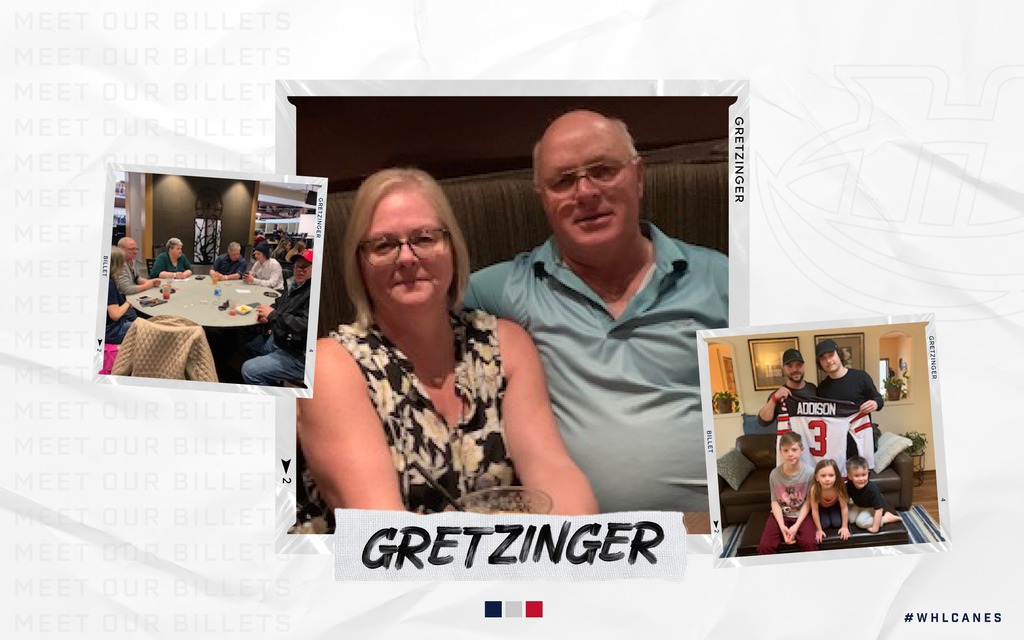 Home to Calen Addison during the hockey season, Debbie and Ron are heading into their fourth billeting season with the Lethbridge Hurricanes. Their grandkids are frequent fliers at the Gretzinger house too, Brayden (12), Easton (4), and Brinely (5). Plus, fur-babies, Mego, and Bella.

Debbie and Ron got started in billeting because they wanted to contribute and be helpful for young people. With their own children grown up, out of the house, and having families of their own billeting would seem to be a natural fit.

Calen finds himself right in the middle of their family. Debbie says that “each of our adult kids took him under their wing and helped out in any way they could. We have regular family dinners and game nights, including all the grandkids and children. We [played] bowling and golf games on the Wii, Calen played floor hockey with the grandkids, and also helped out at Brayden’s hockey practices.” Everyone has their own schedules, of course, but dinner was always at 6:00PM. On game days, a slightly different routine than what we’ve been hearing from other billets; Calen goes to the rink for morning skate, has a meal then a nap when he returns home but then straight to the arena. There’s no pre-game meal, he prefers to eat after the game. 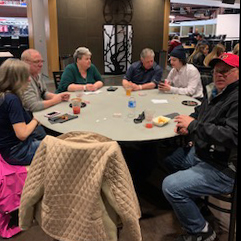 The Gretzingers have nurtured an important relationship with Calen’s parents, sister, and extended family. They stay in touch with the Addisons throughout the year. Debbie says “they are a great family and we have enjoyed getting to know them. We have met his parents, grandparents, aunts, uncles, and cousins. Some of them have been to our house for dinners, we’ve met at hockey games and family night at the Hurricanes games.” In 2018, Debbie and Ron decided to head to Swift Current for a playoff game, along with Calen’s parents, aunt, and uncle. Debbie says “it has been great getting to know his entire family. Each member of his family has been so thankful and grateful for his happiness with our family.” We all are!

Calen and the Gretzingers have shared some special memories together over the years. When Calen returned from the World Juniors with his gold medal, Debbie got a custom blanket made for Calen that featured one of the great photos taken. Calen celebrated his 18th birthday in Lethbridge, an important milestone for everyone. Debbie decorated his room with balloons and gifts, and with the help of Ryan Vandervlis, they had a surprise dinner party for Calen with some of their teammates.

Debbie says meals are easy at their house because Calen is a foodie and eats everything. After much debate, they decided that Calen’s favourite meals are French Onion Soup and cabbage rolls. Debbie says that she would get comments from Calen’s dad about what they were having for dinner and she couldn’t figure out how he seemed to know so much until Calen fessed up to sending photos of his meals to his parents. Darren and Shannon Addison once asked Debbie if they needed anything, Debbie’s response? “Bring a milk cow.” It seems Calen drank a massive amount of milk the first few years, then slowly drank less.

The second year Calen was here we had a lot of snow. Calen’s car kept getting stuck so I bought him a shovel for the car trunk along with an emergency kit just in case he got stuck somewhere with no help.

If you like sharing your life with young people this is a must do! It is very rewarding.