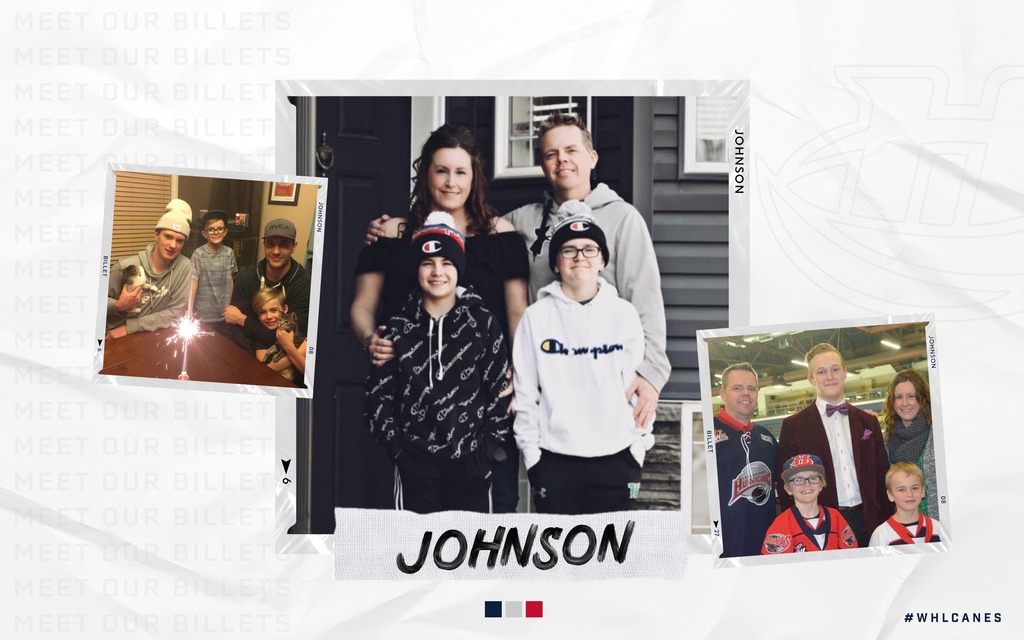 Opening their homes and personal lives to Hurricanes players, billet families play an important role in our organization. A second family to the players, a support system for them and their families – billets are crucial to the success of major junior hockey.

As we continue our weekly billet feature, we would like to introduce you to the Johnson family.

Another busy household with two young boys who play competitive hockey we asked Lisa what a regular day in their house looks like. Just like last week’s billet mom, Kristen DeMone, described it Lisa says it is chaos. “We have a busy life! I’ve worried over the years whether it’s a lot to take in for our billets but they always seem to slide into our chaos! Jamie and I both work; I’m an RN for the palliative care team and Jamie currently works at the research station. Our boys head to school and have sports most nights. The billet boys have a fairly regimented schedule which keeps them busy. Between school, rink, workouts, and community events their days are fairly full. There was still usually time for a quick game of mini-sticks! Jamie is the chef in our house but we often eat supper late and sometimes all at different times.”

So, what about a game day? Lisa said, “Game day involves a morning trip to the rink followed by breakfast when they get home. The players take a nap and we attempt to keep everyone quiet. It’s a lot of “shhhh” some days! If we are home, pre-game is cooked in the afternoon and ready for when they wake up. If we are both working, we cook it the night before or before work so it is ready to heat up. They usually eat between 3:00PM and 4:00PM. By 4:30PM they are off to the rink. For road trips, Ty [Prefontaine] started a Walmart trip the night prior for snacks. They come with me and unload all the groceries so it’s the easiest shopping trip ever!”

Aside from that, Lisa says the family has a busy life but she hopes their billets have always felt they are part of the Johnson family and that their teammates have felt welcome at their home over the years. “We’ve developed some great relationships and memories with several of them. Years ago, during one of the Folk/Pankewicz seasons I arrived home from an errand. They (Carter and Kord) weren’t home but I found one of their teammates in my fridge. “Just grab a snack if you’re hungry Justin…” [referring to Justin Gutierrez] I still laugh whenever I think about it.”

Billeting is a great experience for kids too, Grady and Jaxson Johnson created some special memories for their friends, with the help of their billet brothers. “Our billets have given our boys and their friends some really fun experiences. They have helped out at their hockey practices and other special events such as ball hockey. When our boys were younger their friends were always excited to see the WHL players they watch at the ‘Canes games around our home! There have been lots of mini sticks games and a few dings in the walls. Memories of sweaty kids, yelling, and competition. The game gets serious! The advantage of two billets is that teams are even at two players each. We try to catch as many of the ‘Canes games as possible, it was certainly easier when our own kids were smaller but as they have grown and taken on competitive sports of their own, we have done our best to juggle it. We have travelled for a few away games too and enjoyed two road trips to Regina, one during Carter’s season and the other for Ty.” Many of you will remember that Carter was known to wear bow ties for game day – a trait Jaxson Johnson has taken on for his time in hockey.

It’s not just the players that billet families get to know over the years, but they gain an extended family with the players’ families. Billets are home to players for at least seven months out of the year, that’s more time than players are spending with their own family so naturally, billet families and player families become quite close during that time. “We like visiting with them when [families are] in town for the games. [We] have enjoyed meals and other fun times together. You get to know their grandparents, siblings and other extended family too, and we have built some really fun memories over the years. We have also stayed with the Folk family when in Regina to watch playoff hockey, so they have opened their homes to us too.”

Jamie and Lisa had friends who were billeting so Jamie suggested their family open their home and try as well. The Johnson’s have always enjoyed attending ‘Canes games so they thought it would be a fun way to get involved with the team. Lisa was a little reluctant at first, with two boys of their own they already had a busy lifestyle. Nonetheless, they applied to billet, went through the screening process, and was later contacted when their first billet was confirmed. Kristen Khenkel was flying in from Belarus and due to arrive at night. As first-time billets, the Johnson’s were already nervous, to find out their first billet was a European who may not speak much English they were in for an adventure – one that hasn’t ended though because eight years later they’re still billeting. “As with anything, there have been some occasional bumps along the way but we haven’t looked back. I ask our billets to be honest with us and I feel we have always found a way to conquer anything. I used to tell them I’m not nearly as old as I seem! Ha! Our kids have grown up with big brothers for over half their lives. There have been some really neat experiences for both them and their friends. We’ve been privileged to have a couple long stay players as well, which builds lifelong relationships. I’ve told them I expect a seat at their wedding.” We’ll have you know; it is very common for billets to be invited to their billet players’ weddings.

Lisa loves hearing from former billets to see what exciting things they are up to, as Lisa describes it, “they come to you as teenagers but you blink and they are adults.” Isn’t that the truth? The Johnson’s see Carter [Folk], Kord [Pankewicz], and Ty [Prefontaine] when they visit Lethbridge. When their son Grady has hockey games in Calgary, Kord has been known to join the family for the game. “In the 2016-2017 season, we had Ty and Matt playing for the Hurricanes, Carter playing for the Victoria Royals, and Kord playing for the Brooks Bandits, plus our own two kids in hockey. We put on lots of miles travelling to Calgary or Medicine Hat to catch extra Royals games, trips to Brooks to watch Kord plus trying to catch as many ‘Canes games as possible. It was a lot of hockey! We also had the opportunity to watch a few of the boys play University hockey against the Pronghorns in recent years.” All that travelling? A hockey family, through and through.

Read on to hear some fun stories from the Johnson’s!

Kristian’s return to the team in 2013 was special. He had a great shot from the blue line and scored in his first game with the team. We already had Carter Folk living with us but promised Kris he could stay with us again if he came back. So, they both returned on Boxing Day to a giant pile in the basement of everything from our second spare bedroom! I had no idea where we were putting all that stuff but it was the beginning of several years with two billets instead of one.

Carter’s first night was also memorable. We were hosting a birthday party for our son and had around 50 people over. I’m sure he took one look around after he came through that front door and considered walking back out. He ate his pizza in his bedroom that night.

Jamie had a few really great trips with Carter and Kord. They took a memorable trip to a Flames game one season, Jamie also took them both to Vegas after their final season.

Ty convinced me into a few things over the years, including two kittens. When I finally agreed, I mailed him a stuffed animal to see if he would get the hint. When he came back that year RJ was here waiting for him.

We were also very proud to witness Ty named co-captain this past season. It is a memory we will never forget.

We have a busy life but always try to make time to go out for supper for everyone’s birthday. In recent years, The Keg seems to be a favourite for the older boys. Sometimes we have to choose a different date than their actual birthday but I try to have cake and their present ready the day of. Looking at all the birthday pictures over the years, it seems that it’s usually an ice cream cake!  Alec Baer’s time with us was short but I remember waking up one day wondering when his birthday was. I looked it up on the website and it was that day! It was a quick trip to the store for presents and cake. With many of them living a fair distance away from home, I try to make their birthday special.

For Christmas, I wrap their gifts and send them home to open on Christmas Day. In the Folk and Pankewicz days, we would drive to the ENMAX Centre and bring their vehicle back to the house so it wasn’t sitting there over the Christmas break. I used to find the opened wrapping paper scattered all over their vehicle. I’m sure they would tear the gifts open the minute they drove away from the house! The billets also have a stocking that we put out when we decorate for Christmas. I fill it Christmas Eve with everyone else’s and they open it when they come home on Boxing Day.

My favourite tradition is probably the signature door in Grady’s room. We’ve had our billets and their teammates sign the door over the years they have lived here or spent time in our home. We have signatures from seven seasons. I think we will take the door with us if we ever move.

Cliff bars are a must, and a big bag of rice! A bulk supply of orange juice for the fridge and chicken for the freezer. Catch every chicken sale. Snack choices can change like the weather! I try to ask the boys what snacks they want and have them come shopping with me a few times.

I would say it’s a commitment but is very rewarding. They become part of your family and you care about them.  You will know some of these boys for a lifetime. There are a few tears shed every spring (they probably hate that part!) and I share the same post “And there will always be a day that we have to give them back…”

A big thanks to every family that has shared their son with us and to the Hurricanes organization for including us in this experience for eight years.