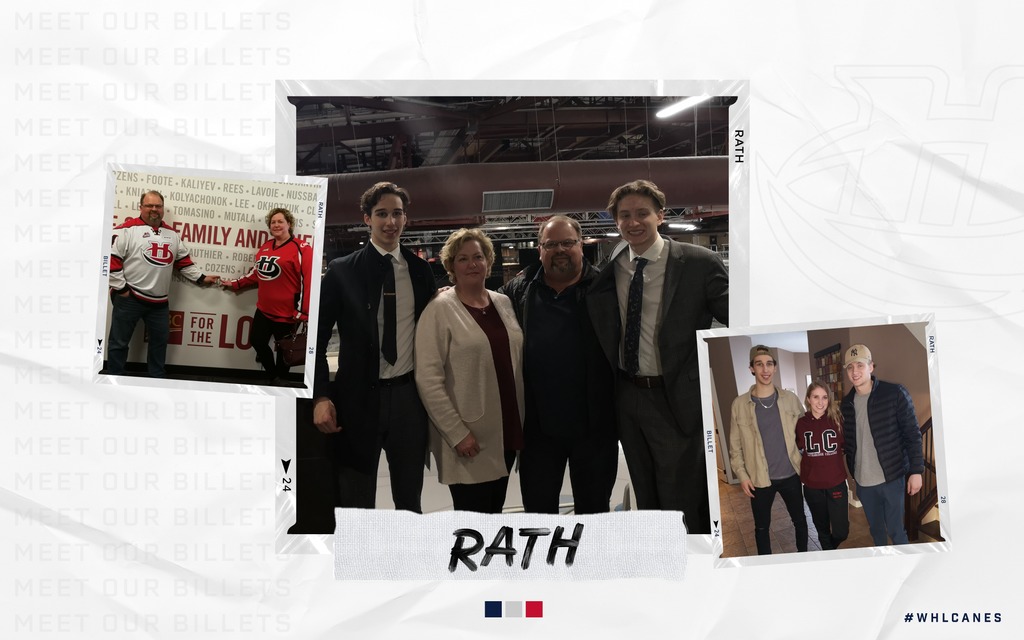 Though relatively new billets, during the Rath’s three years they have been home to Dylan Cozens and Alex Cotton (and a brief stint with Jacob Boucher). Yes, as you’re thinking this was an extra fun article to write.

Billet dad, Kevin is the Service Manager at McDonald Nissan while Billet Mom, Deanna is an RN Home Care Case Manager. Their daughter, Robyn and cat, Henry also live in the home. They have other children who no longer live at home but still consider the players their billet brothers – Laura and Kim Beattie as well as Brayden and Kaylen Rath.

With five kids of their own, we imagine the Rath household was pretty busy through the years. Believe it or not, that was part of the reason Kevin and Deanna decided to open their home and become a billet family. “We were already season ticket holders and enjoyed the Hurricanes games. Becoming a billet was a way to see another aspect of the game and help out a family at the same time. Most of our adult children had moved out of our home so we found ourselves with room to take on a billet. We figured that we had survived raising our own five teenagers so we could handle a few more. The big motivator was to provide a safe comfortable home for these boys that were so far away from their own home – just as we would hope someone would help our own children if the need arose.”

A safe and comfortable home, indeed. Not just for Alex and Dylan but for their teammates as well. The weekly get together for Taco Tuesday is at the Dodd’s but the weekly get together for The Bachelor takes place at the Rath residence. “Last season, the boys did not miss an episode of The Bachelor. We usually had many members of the team, and a lot of snacks, in the basement once a week for Bachelor night on TV.” From conversations we heard around the rink, the team was deeply invested in the outcome of The Bachelor. Alex and Dylan’s parents and siblings will also stay with Kevin and Deanna when they are in town, truly a safe and comfortable home for everyone.

Speaking of Alex and Dylan’s family, the Rath’s have established a great friendship with them and keep in touch on a regular basis. We are close to the families.

We exchange pictures and family updates both during the season and in the summer.” From Langley, BC and Whitehorse, YT neither Alex or Dylan’s family live close to Lethbridge. “We talk to the parents throughout the season and offer to have them stay at the house anytime they are in Lethbridge. This gives us a great opportunity to sit and chat over coffee or a meal. We have met extended grandparents and other members of the players’ extended family. We try to keep the parents informed of any exciting or trying times and have always had a good relationship.”

So, what’s it like billeting two NHL drafted players? Well, they’re still teenage boys navigating the real world so at their billet home they don’t have to worry about being a draft pick or doing interviews – they can just relax and be a teen. Their billet sister, Robyn is three months older than Dylan and six months older than Alex – a fact she likes to remind them of (as any older sibling would). That means they went to high school together and had many conversations about school, homework, what classes they liked, and of course – the school gossip. Much like any other teen. And when winter arrives in Lethbridge? Well, “Kevin takes the boys to the shop and helps them put on their own snow tires. He’s also taught them how to change the oil in their cars and how to replace the front bumper on a car (there was an “incident” that occurred with one of their cars – they went straight to Kevin for bumper fixing advice lol!). Kevin says while the boys did learn how to change their oil, they also learned how to have water fights in the car wash bay at the automotive shop while Kevin finished up working on the cars.”

But for Deanna and Kevin, it’s still a proud and exciting accomplishment watching both Dylan and Alex get selected in back-to-back NHL Drafts. As with any family, they love celebrating all their hockey accomplishments together. “With Dylan, it was exciting to celebrate with him the numerous Hockey Canada tournament invitations, the Prospects game, and of course the NHL draft watching him get picked 7th overall by the Buffalo Sabres! We went to as many of those games as we could to cheer in person.” And with Alex, “Watching Alex flourish last season to capture the WHL scoring lead by a defenceman was awesome.” Though a different format in 2020, it was still a proud moment for Deanna and Kevin to hear Alex’s name called 132nd overall by the Detroit Red Wings. “All these times were very special and made us feel very proud of these two young men!”

Read on to hear some fun stories from the Rath’s!

Some of our fondest memories with the boys happen at the dinner table, we get into some very intellectual and sometimes very humorous conversations about lots of different topics.

Billeting has given the Rath’s more opportunities to create their own family memories, too. “We have only adult children now. Our adult children come to the Hurricane games when they can and refer to the players as their brothers. Our daughters in Edmonton have gone to see the boys play when the Hurricanes play in Edmonton. They also went to cheer Dylan on in the tournaments he was in that were played in Edmonton.”

We celebrate their birthdays, Christmas, high school graduation, and other holidays. There is always a Christmas gift under the tree waiting for

them when they get back from Christmas break and we exchange Christmas gifts with their families as well. They both still enjoy the candy left here for them by the Easter Bunny. For birthdays we get them a gift and they get to choose to either go out for a nice dinner at a restaurant or we will make them their favourite meal at home – this is the same tradition we do for our own children.

Some fun facts we learned along the way: Alex can stuff approximately 20 cherry tomatoes in his mouth at once and can eat an entire hamburger in two bites. Dylan’s record for tacos eaten in one sitting at home is nine, the boys would on occasion puff out their stomachs after supper to see who ate more.

A few traditions that emerged: we buy each boy a huge soft blanket that they use nearly every night and tend to drag around the house/wrap up in to game or watch TV. We always give the boys $20.00 and some chewy candies when they leave to get on an airplane (Deanna wants to make sure they have money to eat at the airport and doesn’t want their ears to pop on the plane). We run through the checklist at the door before road games – phone, charger, pillow, blanket, snacks.

Now that the boys have graduated high school, they can sleep in a bit so are generally still in bed after we have left for work. They make their own breakfast and head to the rink or the gym. Alex is

the breakfast chef and has mastered how to make six perfect soft fried eggs in one pan so they can each eat three eggs for breakfast – with fruit usually. They come home after practice and heat up leftovers or make themselves something else for lunch (Kevin taught them how to make a perfect grilled ham and cheese), grab a little nap before dinner time. We all sit down at the table together for supper – one of our favourite times. We often referred to this as “dinner and a show” as the boys are hilarious when they get on a roll of talking about their day. The boys enjoyed playing video games, playing each other or Kevin in a game of pool, or just watching Netflix in their downtime when at home – all of these were usually done with snacks close at hand. Some evenings the boys would go hang out with the other players for a while after supper.

Always the same routine. Breakfast of eggs and fruit. Sometimes on the weekends we would add in pancakes or hash browns and bacon to breakfast as we had extra time. Then off to practice. Home for lunch and then straight to their rooms for a rest until it was time to eat pregame meal. Pregame meal between 2:30-3:30pm. For Dylan, this was almost always fettuccine alfredo with chicken and for Alex, it was chicken and brown rice usually with a vegetable. Always a bowl of cut-up fruit to go with pregame meal. The boys drove themselves to the rink at 4:30. Pregame meal is either made ahead of time the night before by us and put in the fridge for the boys to heat up, or we make it fresh on game day if one of us has the day off work.

At home the players don’t have to worry about playing hockey well, being a draft pick, scoring goals, talking to fans, doing interviews, or anything else; they can just be kids relaxing in their home. This is the coolest and most rewarding thing to witness as a billet. It is fun to see these tough, serious, hard-working large players sit at home and scream in loud, high pitched voices (loud enough to hear throughout the house) as they slay others in a video game. We have learned a lot of hockey and player slang over the years. Deanna often stops to ask what something means when the boys chat; she now knows what it means to be “dialed in” or a “GOAT.”