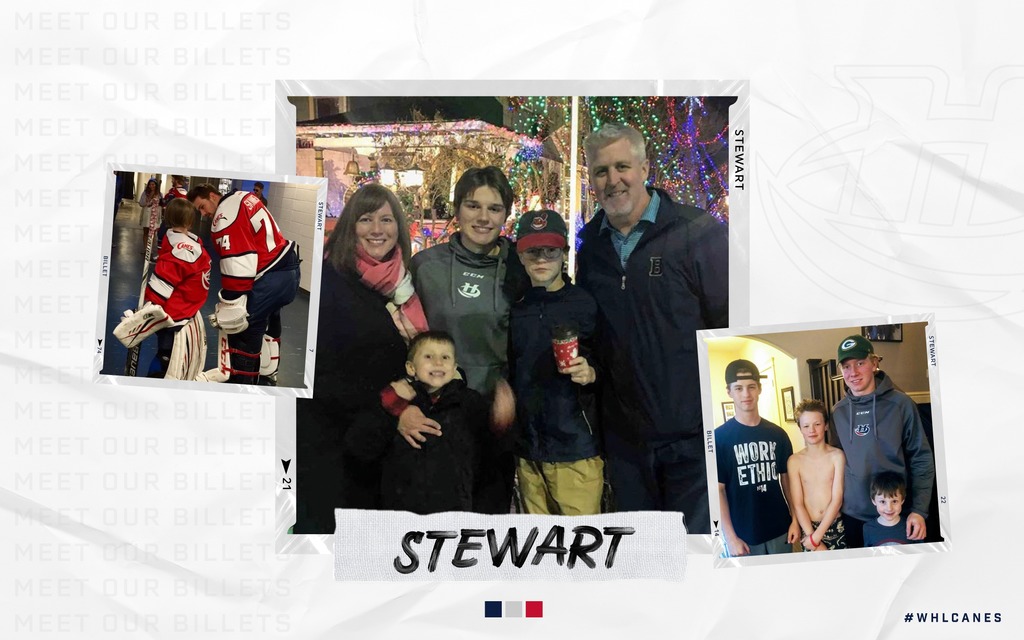 Seven years as a billet family, Peter and Shannon Stewart, along with their sons David, Will, and Ryan have welcomed players into their home from the time Ryan was a newborn – literally, as he is just seven years old! Another true Canadian hockey family, their eight-year-old Golden Doodle hangs around the home and is named Bauer.

Their most recent billet is Ty Nash, but their first? Stuart Skinner. They’ve also welcomed Owen Blocker and Rylan Thiessen to their home during that time.

On an early morning in 2014, the Stewarts received a call from then-coach Drake Berehowsky saying the Hurricanes had a young goalie they were trying to find a billet family for. Stuart and his family met Peter, Shannon, and the boys later that day and all thought it was a great match. In true hockey fashion, “Stuey pointed out we had a number of things in common. His name was Stuart and our last name is Stewart, his birth year was 98, and our house number is 98, and his jersey number (at the time) was 74, which is also our birth year, so we felt these were good signs of a good match and I think he was right.”

Yes, Stuart was right. They become his home for the next four years before he was traded to Swift Current in that blockbuster deal that sent Stuart, Giorgio Estephan, and Tanner Nagel to Swift in exchange for Logan Barlage, Owen Blocker, Matthew Stanely, Logan Flodell, a first and third round pick in the 2020 WHL Bantam Draft, and a conditional second round pick in the 2021 WHL Bantam Draft. Stuart fit right in as big brother and spent quite a bit of time with his three young billet brothers. “Our middle son [Will] is a goalie and he was the [Canadian Tire] 7th player at one of the ‘Canes games, so it was neat to see Stu and Will walk through the tunnel together. Will and Stu have a special bond and would spend time designing custom goalie pads for fun. They still send each other pictures of their designs and get one another’s opinions.” Peter Stewart said that “Stuart also took the time to take Will and his goalie partner for hot chocolate a couple [of] times a year and talk hockey.” A pretty special experience for the pair, for sure.

Will and Stuart have a special bond, but all their billets have their own memories with the family in various ways. The Stewarts try to have family dinner at the kitchen table as much as possible; with three boys playing various competitive sports of their own, this isn’t always the easiest task to accomplish. However, the Stewarts say “it’s a really nice part of our day, so we can hear about one another’s day and [we] think has been one of the best ways to get to know one another.” In addition to family dinner, billeted players have attended David, Will, and Ryan’s hockey, volleyball, baseball, or taekwondo events when their schedules allow. Some have also attended their billet brothers’ hockey practices.

When billets move on from the Lethbridge Hurricanes, Peter and Shannon try to keep in touch regularly. “When Stu was traded, we went to watch the games at the Memorial Cup. He has also been back to visit and we have been able to meet up in Calgary and Red Deer where he spends summers. We have also visited both Rylan and Owen in Manitoba during a hockey tournament for our son, Will. Their families came to watch Will’s games as well which was really special.”

Yes, new extended families are made through billeting. The Stewarts say they “have been very fortunate to get to know all of our billets’ parents and families. We have shared meals and visits, celebrated successes, and talk through difficult times. It’s important to us that we provide the kind of care their parents would hope for and also reinforce the values that are important to their parents. Our billets have really wonderful and loving families and we feel so honoured that they have placed their trust in us to be a home away from home.”

Read on to hear some fun stories from the Stewart’s!

We have a number of favourite memories, but there are a few that stand out:

Most years the schedules have worked out that our billets are able to celebrate special occasions with us, like Thanksgiving, birthdays, and Christmas. We have really missed having Ty here this year for Thanksgiving.

We were also lucky enough to attend Stu’s NHL draft.  It was pretty special to see him be drafted.  He’s a very hard working and committed player and we were so happy to see this happen for him.

We try to follow as many of our former billets’ hockey games online as possible.  We are really cheering for their successes.

We were at a hockey fundraiser for the Pronghorns the night Stuey scored his goal, but the boys were at the game though and they said that was one of their favourite memories. The excitement and size of the crowds during the playoffs that year was so exciting. We also loved the reaction of the crowds every time Owen had a big hit, Rylan teeing up for a big slap shot, and of course Ty’s celebrations after a big play – he is so joyous, on and off the ice.

Many nights the kids go down to the basement after dinner for epic mini stick battles. We love hearing all the cheering. Sometimes it’s pretty hard core and we have some drywall scares that are evidence of this. My boys would say this is one of their favourite things to do together.

We have a special tradition that we share with another billet family, the DeMone’s. We get our families together for special occasions like Thanksgiving and Christmas and have a big feast and then the boys help with the dishes, usually followed by a game of road hockey, mini sticks, or video games.

Most years the boys have been able to come to the kids’ school Christmas concert. It’s always a really special time of year and then we go look at Christmas lights and go for hot chocolate.

We eat a lot of chicken according to my kids. We also like to have tacos as a quick meal, so we typically have this every week or so. The boys love when we can have a pizza night. Shannon does a lot of baking.  Pumpkin scones and ginger cookies are always popular this time of year.

We go through lots of cereal (Ty especially loves Mini-Wheats), protein and granola bars, apples, protein powder for smoothies, trail mix, and jerky. I do a lot of baking, so there are typically muffins or cookies around too.

It can differ by player, but for Ty who is in high school his day would start fairly early getting up for school and leaves around 7:30AM, then he would head to the rink for practice in the afternoon. We would generally meet back at home for dinner. During the evening he would be working on homework, playing video games, mini sticks, and occasionally, has team commitments and gatherings like bowling, volunteering, or the movies.

Typically, our billets would head to the rink for a stretch in the morning. If it’s a weekday game your billet may have school before the game. In the afternoon it’s quiet time and the players will typically have a nap, play video games, or listen to music.  Then we typically prepare pre-game meal for mid-afternoon.  A general favourite has been chicken breast, sweet potatoes, and brown rice.  Some billets like to switch it up from game to game, but most like to follow the same routine.

Every billet will have different wants and needs. Take the time to get to know these and how that might work with your family.  For example, a younger player still in high school is going to need some quiet time and maybe help and encouragement to stay on track with their school work, while an older player may be looking for more independence. It’s finding the right balance and keeping lines of communication open.

Being a billet does take time, planning, and care. The ideal family is someone that has some time to be there to support their player.

In our experience, the players come with strong self discipline and are very responsible. The players have a lot to juggle from school, practices, community engagements, and homework. We have found that most players really strive to have a healthy diet and [are] conscientious of rest and wellness.