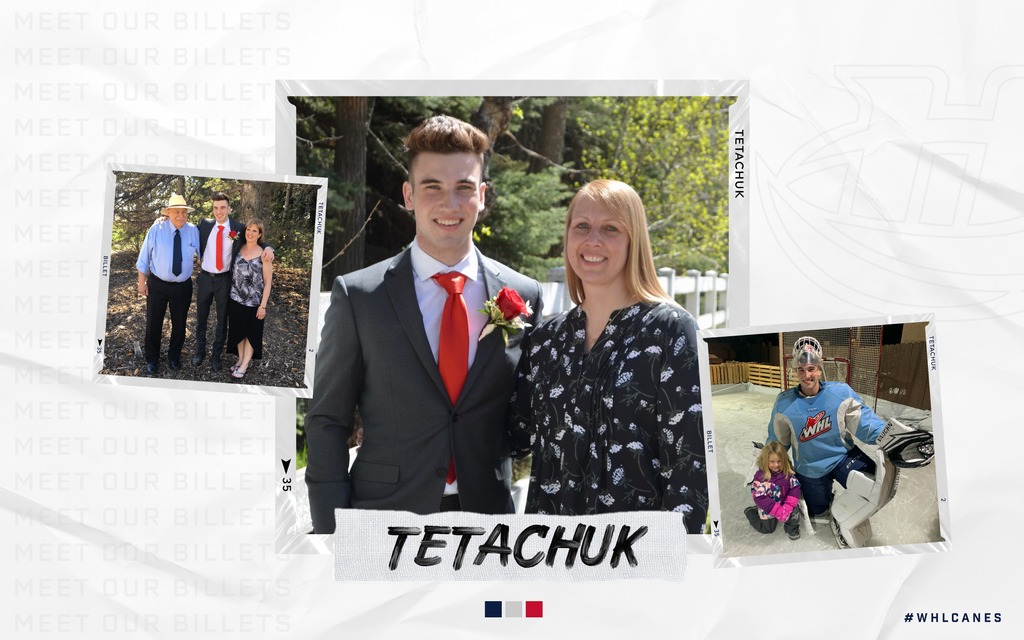 Another special write-up today in our billet family features as we talk with Kelly Tetachuk, Carl Tetachuk’s mom AND billet mom. Yes, you read that right. If you read our earlier feature about Zack Stringer, you will know that our hometown boys live at home during the hockey season and well…year-round. As we’ve been sharing stories from billets about what it’s like opening their homes to our players, today we talk about what it’s like having your son stay at home instead of being billeted by another family.

Carl lives at home with mom, Kelly, and dog Crüe. Carl was the New Year’s baby in Pincher Creek in 2001; he was named after Kelly’s dad who passed away in a trucking accident when she was a teenager. Carl grew up on the farm west of Pincher Creek and loved to play with the dogs, ride horses, and chase the cows. Carl had a little Gator when he was a kid, he moved rocks with it and drove all over the farm. He has always been a natural athlete, excelling at any sport he tried. Carl and Kelly used to go public skating every Sunday and Kelly says, “He loved it.” One of Kelly’s co-worker suggested putting Carl in hockey and the rest is history. Though Carl started as a skater he quickly moved to be a goaltender and was a natural fit. Carl played peewee hockey with the Taber Golden Suns, the family drove to Taber several times a week as they still lived in Pincher Creek. It wasn’t until Carl’s bantam year that Kelly and Carl moved to Lethbridge. 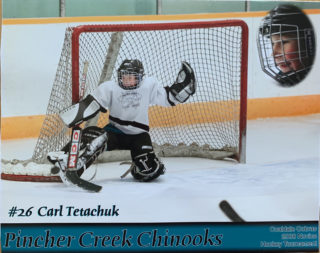 Kelly says that as Carl progressed throughout minor hockey, her “employers were understanding about taking time off to take him to practices and games. His grandparents were also supportive and helped take him to many practices and games. The family helped to build him an outdoor rink in the winters. Grandma was a baseball pitcher so she threw pucks to Carl from a bucket for hours so he could practice.”

Grandpa Ivan was a staple in Carl’s life. Many memories involve Grandpa Ivan; Kelly said “Carl’s first time playing in the Saddledome was a highlight for Carl’s grandpa, who was his biggest fan. He phoned everyone, telling them ‘my grandson is playing in the Saddledome!’” She also shared that his first time starting for the Hurricanes in Lethbridge was a favourite memory of theirs, “It was a proud moment to see his name in lights on the jumbotron. This brought tears to his grandpa’s eyes.” Grandpa Ivan would always “sit or stand as close to Carl’s net as he could, to count the shots on him and offer advice after the games. Carl would look forward to those calls and texts.” Ivan passed in 2019, the Lethbridge Hurricanes staff and players attended the funeral to show their support for Carl and his family, a gesture that Kelly acknowledges, “it was very thoughtful when minor hockey team members and families, and the entire Hurricanes team including coaches and staff supported Carl at his grandpa’s funeral.”

Kelly is a proud hockey mom who has had the privilege of being able to attend almost all home games and having her son continue to live at home through his junior hockey days. “I appreciated that Carl could stay home to finish high school.” She says they have talked a little bit about what it might be like if Carl had to live away from home but for now Kelly says, “I’ve appreciated having him stay at home to watch him grow up and spend time with him.” Though Kelly says the road trips now are longer than his minor hockey days, “and the stress level is higher as a goalie mom!”

We wanted to know a little more about young Carl including his minor hockey days, favourite memories, what the biggest differences are for Kelly, and more. Kelly says that “Carl watched Hurricanes games growing up and got to play during the intermission with minor hockey. We always talked about how nice it would be if he could play for the Hurricanes and be able to stay at home. Now that’s a reality!”

One of Kelly’s favourite memories is Carl and his teammates winning bronze at the 2018 Telus Cup. She says it was one of the most memorable minor hockey tournaments (we don’t doubt that for a second). The team won bronze and Carl was the first goalie to get a shutout during a bronze medal game in the 45-years of the national championship, as well as the first goalie to earn a shutout in any medal game since 2013. He was presented with the Telus Cup Scholarship Award.

Kelly is also very proud of Carl and his numerous achievements through minor hockey, including: being on the team that won the 2016 Alberta Major Bantam Hockey League (AMBHL) championship, and winning the Alberta Minor Midget Hockey League (AMMHL) championship with his teams in the 2016/2017 and 2017/2018 seasons. She is also proud of Carl’s 2017 Alberta Midget Hockey League’s (AMHL) achievements, including best GAA, AMHL First All Star Team, and being named the AMHL Top Goaltender.

Kelly also acknowledges Carl’s time playing in the Alberta Cup and Alberta Winter Games, as well as his time playing on the South Central Alberta Hockey League (SCAHL) All Star Team in his peewee years. Of course, one of Carl’s biggest achievements to date, being named the Lethbridge Hurricanes Carl Trentini Memorial Award winner as Rookie of the Year for the 2018-2019 season was especially a proud moment for Kelly.

Community has always been important to Kelly and Carl and they are grateful for the support Carl has received during his time. “Carl has a great fan base and is easily recognized around Lethbridge. I often get asked my relationship to Carl. People are eager to talk about Carl and the Hurricanes and show a great deal of pride and support for him and the team. I always enjoy these interactions.”

Kelly shares that Carl “really appreciates the fans he has and is always willing to help out younger players, or stop and talk with someone. He really enjoys working the Hurricanes summer camp and participating in community events.” Kelly and Carl are grateful for all the lifelong friends they have made throughout their hockey adventures. They still maintain these friendships and try to take an annual trip together. They also keep in touch with former coaches and appreciates all they have learned from each and every one over the years.

Both Kelly and Carl value the Lethbridge Hurricane managers, coaches, staff and everyone connected to them. Carl is proud to be the goalie for his hometown of Lethbridge.

Read on to hear more about Kelly and Carl at home!

Tell us about when you found out Carl would be signing with the Lethbridge Hurricanes.

Carl received the call to come in on February 9th, 2017 to sign with the Hurricanes. He then phoned me at work, extremely excited! The thrilling news was quickly shared with family and friends. I was so proud of my son. I was glad to see that his hard work had paid off, and a dream had come true. While he was at his Midget practice, I hung streamers and banners at home for when he walked in, and we celebrated when he got home!

Tell us about some family traditions. 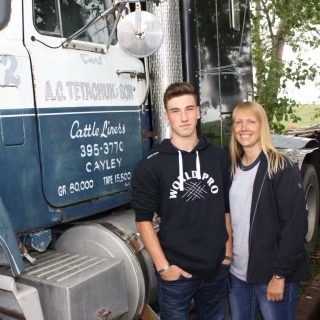 Thanksgiving, Christmas, and Easter are celebrated with big family dinners at the farm in Pincher Creek. Game nights and arm wrestles often accompany these dinners! At Christmas, each family member gets a special tree ornament to celebrate something special that happened that year. Carl’s usually involves hockey! There are calls and texts on birthdays, and Kelly and Carl usually like to go to The Keg for a special dinner.

Hot wings are a favourite in our home.

We follow more of a schedule during the season, including more specific meal prep.

In the off-season, Kelly heads out early to work and Carl makes his breakfast and a smoothie, looks after the dog duties and heads to workout. Ice time in the afternoon and yoga in the evening.

We eat at a specific time; Carl likes to have a power nap early in the afternoon and usually a specific meal such as chicken and pasta.

During the season is there anything you have to keep stocked in the pantry that you wouldn’t during the off-season?

Not really, Carl is consistent in his diet and takes care of his nutrition.

Does Carl often have his teammates over or is he more likely to go to a teammate’s billet home?

We have hosted many team gatherings and teammates come over to “game.”

Kelly’s house was utilized as a mini-stick arena and Carl put his roller blades on to practice as soon as he was home from school, if he didn’t have ice to use.

He has stayed close with his grandparents, Ivan (whom he lost in 2019) and Sandy, his Aunt Jessi, his Uncle David, Aunt Danielle, and his cousins, Brinley and Landon. Kelly and Carl have a close bond and spend many weekends in the mountains dirt biking. They continue to enjoy visits to the farm, including camping trips at the private campground.

With the COVID pandemic affecting the season, Carl has been taking a more focused interest in nutrition and health, including taking college courses and further improving his own physical fitness. When health regulations permitted, he also helped coach younger kids which he really enjoys. He has also been utilizing ice time on outdoor ice and artificial ice to stay in top shape. 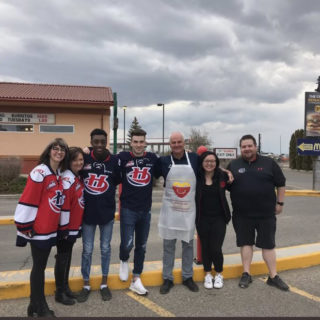