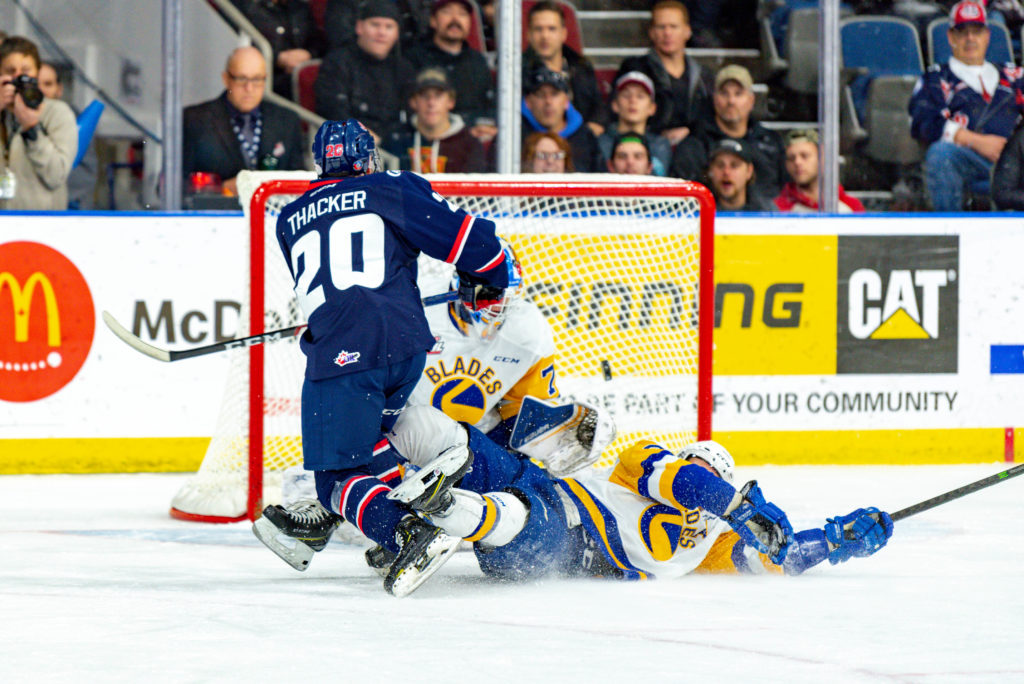 Lethbridge, AB – The Lethbridge Hurricanes had their two-game winning streak snapped on Friday with a 4-3 shootout loss to the Saskatoon Blades at the ENMAX Centre.

The Hurricanes were dominant in the opening frame as they peppered Saskatoon goaltender Nolan Maier with 19 shots in the opening frame. The ‘Canes took a while to get one by Maier, who was stellar in the first period. Lethbridge opened the scoring on a goal by Alex Thacker as he burst through the Blades defense before chipping home his second goal of the season to make it 1-0. Down a man, Oliver Okuliar gave Lethbridge a 2-0 lead with his 19th goal of the season – third while shorthanded – with just 2:29 left in the opening frame as the ‘Canes led 2-0 after one period. The ‘Canes outshot the Blades 19-3 in the first period.

The game shifted in the second period as the Blades picked up their game when they struck early on a power play when Eric Florchuk snapped home his 10th goal of the season at the 6:34 mark to cut the ‘Canes lead in half. Lethbridge had their chances to add to their lead but couldn’t beat Maier in the middle frame. Saskatoon tied the game with just 1:01 left in the period when Jayden Wiens lifted home his fourth goal of the year to make it 2-2 after forty minutes of play. Saskatoon led the shots 14-9 in the middle stanza.

The Hurricanes re-took the lead early in the third period when Okuliar scored his second goal of the night and WHL-leading 20th goal of the season beating Maier over the glove to make it 3-2 just 1:17 into the period; Dylan Cozens and D-Jay Jerome earned the assists on the goal. Saskatoon clawed back to even when Zach Huber banged home a loose puck with 2:28 left in the game to force overtime tied at 3-3.

In the extra session, neither team would score despite great chances at both ends. The Blades’ Scott Walford nearly ended the game when he hit a goal post moments before Zack Stringer failed to finish a move to the forehand on a breakaway as the game went to a shootout.

In the shootout, Kyle Crnkovic scored to lead things off but no-one else – including Dylan Cozens, Oliver Okuliar and D-Jay Jerome for the Hurricanes – would score as the Blades stole the second point earning the 4-3 shootout victory over the ‘Canes.

Shots favoured the Hurricanes 43-29 in the contest as the ‘Canes outshot the opponent for the 12th straight games. Lethbridge went 0/2 on the power play while Saskatoon was 1/3 with the extra man.

The loss for the Hurricanes ends a two-game winning streak as they fall to 7-4-0-3 at the ENMAX Centre this season while they fall to 17-7-0-4 on the year.

The Hurricanes will visit the Medicine Hat Tigers on Tuesday at the Canalta Centre before returning home to welcome the Everett Silvertips on Ladies Night at 7:00pm. Tickets can be purchased online at www.enmaxcentre.ca, by calling 403-329-SEAT (7328) or by visiting the ENMAX Centre Ticket Centre.