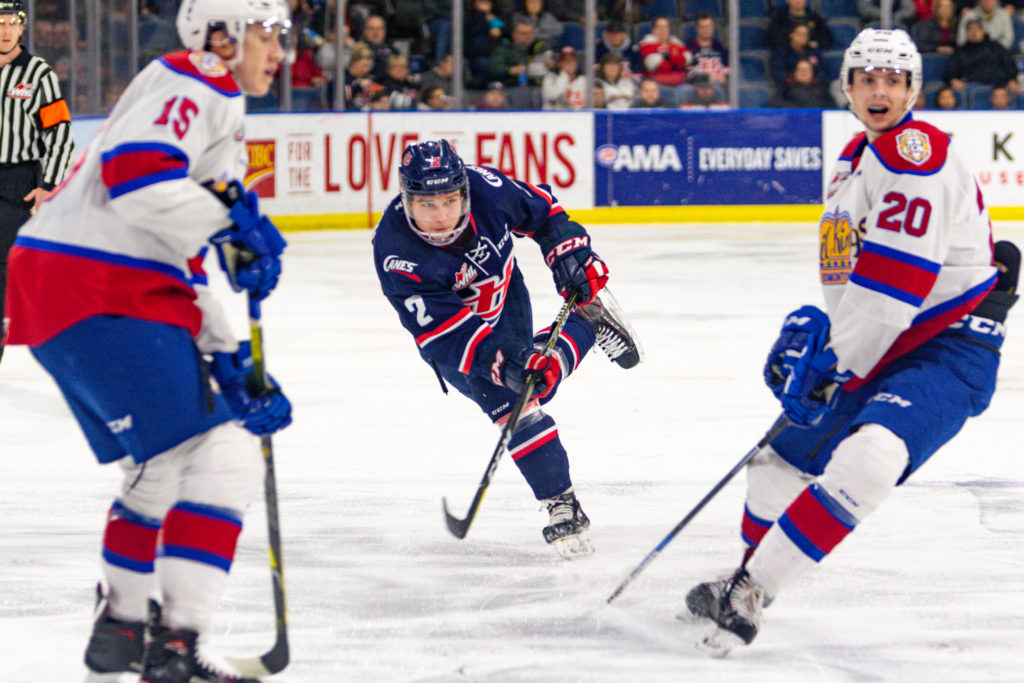 Lethbridge, AB – The Lethbridge Hurricanes earned a 5-2 victory Sunday in Edmonton against the Oil Kings at Rogers Place.

It was a good first period for the Hurricanes on the road as they outshot the Oil Kings 10-5 in the opening frame. Lethbridge struck to open the scoring as Dino Kambeitz banged home his second goal of the season at the 9:05 mark to make it 1-0; Alex Cotton and Justin Hall earned the assists on the goal. Bryan Thomson, who started his second game of the season, made a few good saves to keep the games ahead after twenty minutes of play.

Early in the second period the Oil Kings tied the game as Vladimir Alistrov buried a centering pass from Carter Souch passed Thomson just 1:31 in to tie the game 1-1. The Hurricanes re-took the lead at the 9:08 mark as Dylan Cozens snapped home his second goal in as many games while on a shorthanded break to put the ‘Canes up 2-1. Before the period was out, Edmonton was able to once again tie the game as Riley Sawchuk capitalized at the side of the net to even the score 2-2 after forty minutes. Shots were tied 12-12 in the middle frame.

In the third period, the Hurricanes once again pulled ahead for the third time as Cozens beat a screened Todd Scott with a high-slot shot to make it 3-2 for Lethbridge. The ‘Canes added a pair of power play goals late in the game as Oliver Okuliar and Calen Addison both struck to make it a 5-2 win for Lethbridge.

Shots in the game favoured the Hurricanes 30-26 in the game. Lethbridge went 2/4 on the power play while Edmonton was 0/4 on the man advantage.

The victory for the Hurricanes improves their record to 2-1-0-1 on the season. The ‘Canes also improve to 2-0-0-0 on the road this season.

The Hurricanes will be back at the ENMAX Centre on Wednesday, October 2nd when they welcome the Saskatoon Blades. Tickets can be purchased online at www.enmaxcentre.ca, by calling 403-329-SEAT (7328) or by visiting the ENMAX Centre Ticket Centre.