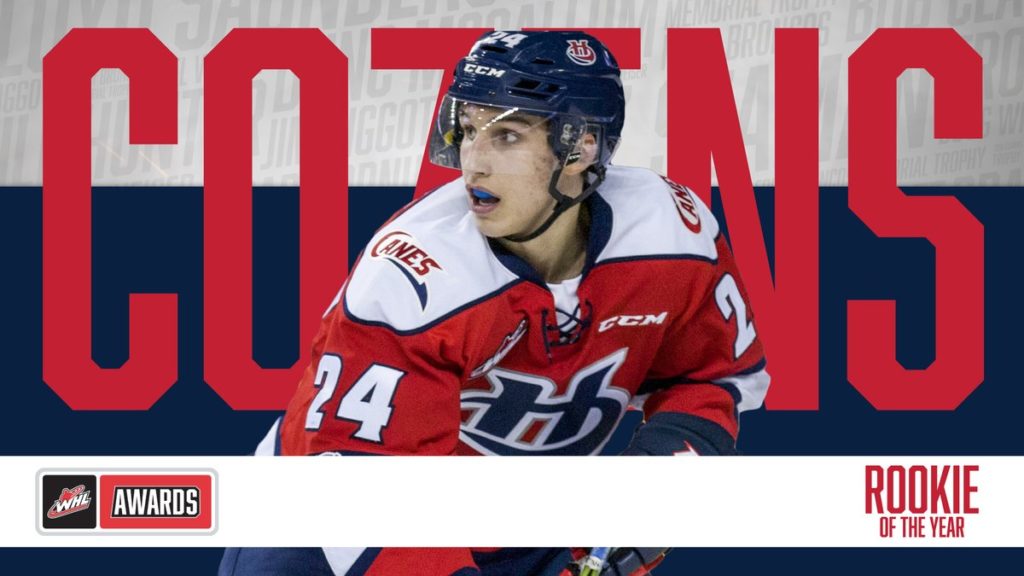 Cozens, 17, completed his first full season in the WHL appearing in 57 games with the Hurricanes this season finishing with 53 points (22g-31a) along with 20 penalty minutes and a minus-6 rating. The product of Whitehorse, Yukon, was the first player from the territory selected in the first round (19th overall) in the WHL Bantam Draft when the Hurricanes chose him in 2016. He added another 13 points (7g-6a) along with 14 penalty minutes and a plus-3 rating in 16 post-season games helping the Hurricanes to their second straight Eastern Conference Championship.

Cozens finished second in the WHL in rookie points (53) and first in rookie goals (22) as he was the only first-year player to reach the 20-goal plateau. He became the first Hurricanes 16-year-old to reach the 50-point plateau since 2005-2006 when Zach Boychuk finished with 51. Cozens becomes just the second Hurricanes player in franchise history to be named the WHL Rookie of the Year joining Wes Walz who won it in 1988-1989.

“It’s a huge honour and there’s lots of other really good players that could’ve won it,” said Cozens. “I’m really happy. I wouldn’t have been able to do it without the opportunity I’ve been given here [in Lethbridge]. I’ve been given every opportunity to succeed and I’m really grateful for that.”

Flodell, 21, finished as the runner-up as the WHL Top Goaltender. The overage netminder was acquired in a trade from the Swift Current Broncos prior to the WHL Trade Deadline by the Hurricanes. In 26 regular season games with the ‘Canes, Flodell recorded a 14-10-1-0 record with a 3.21 goals against average (GAA) and a .904 save percentage (SV%). In the WHL Playoffs, he posted a 10-6 record with a 2.79 GAA and a .906 SV% along with two shutouts helping the ‘Canes to the Eastern Conference Championship Series.

The product of Regina, Saskatchewan finished the regular season first in games played among goaltenders (61), second in minutes played by a goaltender (3,474), first in shots faced (1,999), first in saves (1,818), first in victories (38), sixth in shutouts (3) while leading all Eastern Conference netminders with a .909 save percentage. Flodell was also named a First Team All-Star in the Eastern Conference.