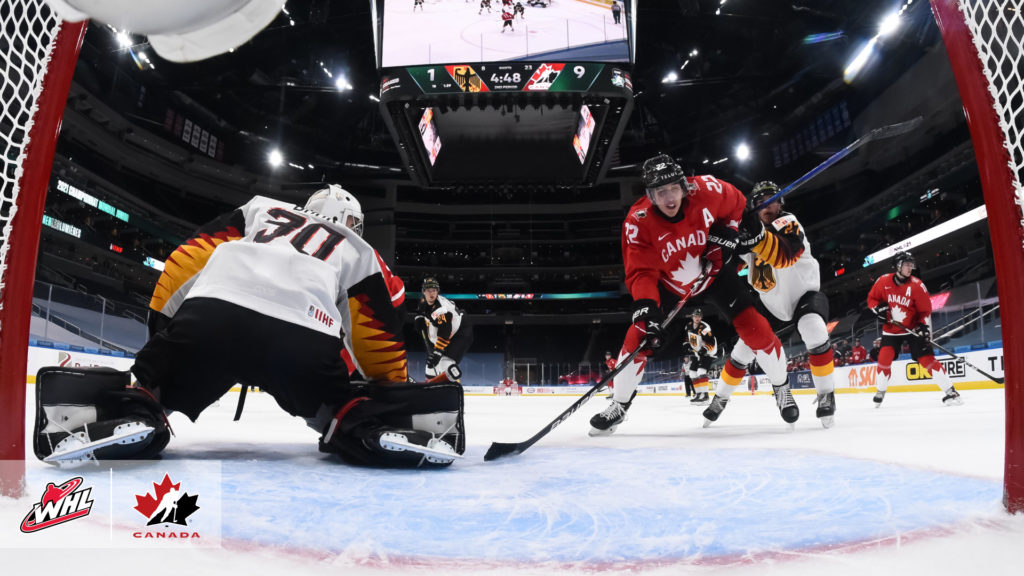 Edmonton, Alta. – Following an outstanding six-point performance, Dylan Cozens of the Lethbridge Hurricanes has been voted IIHF Fan Choice Player of the Day for Saturday, December 26 at the 2021 IIHF World Junior Championship.

Cozens, who was selected seventh overall by the Buffalo Sabres in the 2019 NHL Draft, exploded in Canada’s decisive 16-2 victory over Germany to open the 2021 World Juniors. The product of Whitehorse, Yukon, registered a hat trick – the first for any player at this year’s event – and added another three assists, to help fuel Canada’s powerful offense.

A 6-foot-3, 187-pound natural centre, Cozens was shifted to the wing for Canada’s opening game of the tournament, and he flourished.

Originally selected by the Hurricanes 19th overall in the 2016 WHL Draft, Cozens has collected 223 points (95G-128A) in 179 career regular season contests over the course of his WHL career. He won the Jim Piggott Memorial Trophy in 2017-18 as the WHL’s Rookie of the Year, and was voted to the WHL Eastern Conference First All-Star Team for 2019-20.

Cozens and Canada will look to capture a second victory at the 2021 IIHF World Junior Championship on Sunday afternoon (4 p.m. MT) when they take on Slovakia.

Question – is this good? #WorldJuniors https://t.co/GUVjaB0hpZ