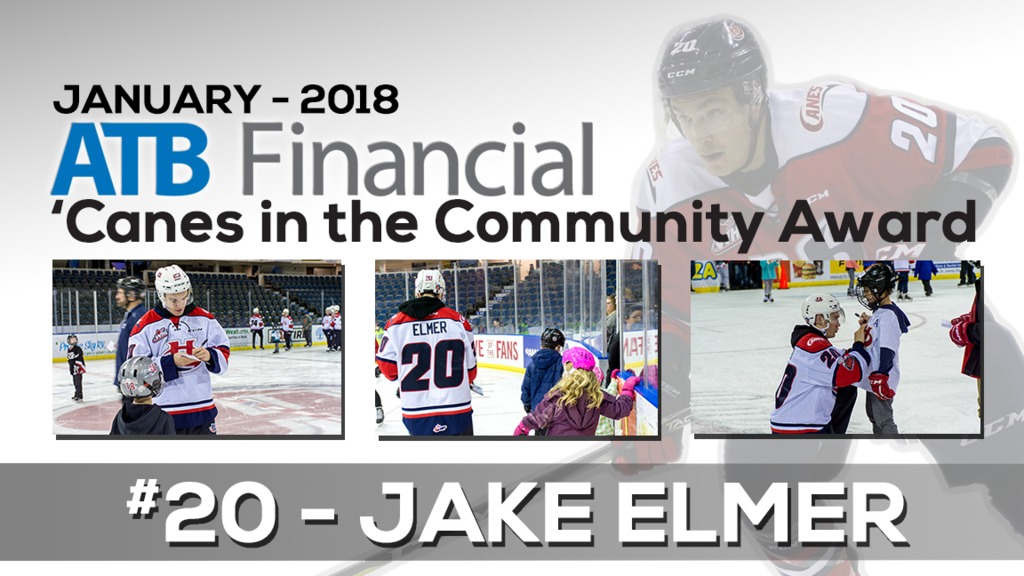 Lethbridge, AB – The Lethbridge Hurricanes Hockey Club, in partnership with ATB Financial, have named Jake Elmer the January recipient of the ATB Cane in the Community Award winner.

Elmer, 19, has been an outgoing member of the Hurricanes volunteering his time at most of the local events. The first year Hurricane has embraced being able to make a difference in the community. During the month of January, Jake took part in countless ‘Skate with the ‘Canes’ including the CIBC and AMA skates. He also participated in the ENMAX Pond Hockey and the Davis GMC-Buick Train Like A Hurricane.

Elmer, who scored the Teddy Bear Toss goal on December 2nd against the Victoria Royals, was one of six Hurricanes players to attend the annual delivery of the teddy bears to the Chinook Regional Hospital’s Pediatric Ward.

So far this season, Elmer has appeared in a career-high 48 games while collecting a career-high 14 goals and 23 points along with a plus-7 rating and 25 penalty minutes. Elmer was acquired by the Hurricanes at the outset of the 2017-2018 regular season from the Kootenay Ice.

The Hurricanes return to action on Friday when they welcome the Swift Current Broncos to the ENMAX Centre before welcoming the Edmonton Oil Kings on Saturday night. Take advantage of the 2 for $32 ticket deal and get your tickets for both games this coming weekend. Tickets can be purchased online, by calling 403-329-SEAT (7328) or by visiting the ENMAX Centre Ticket Centre.