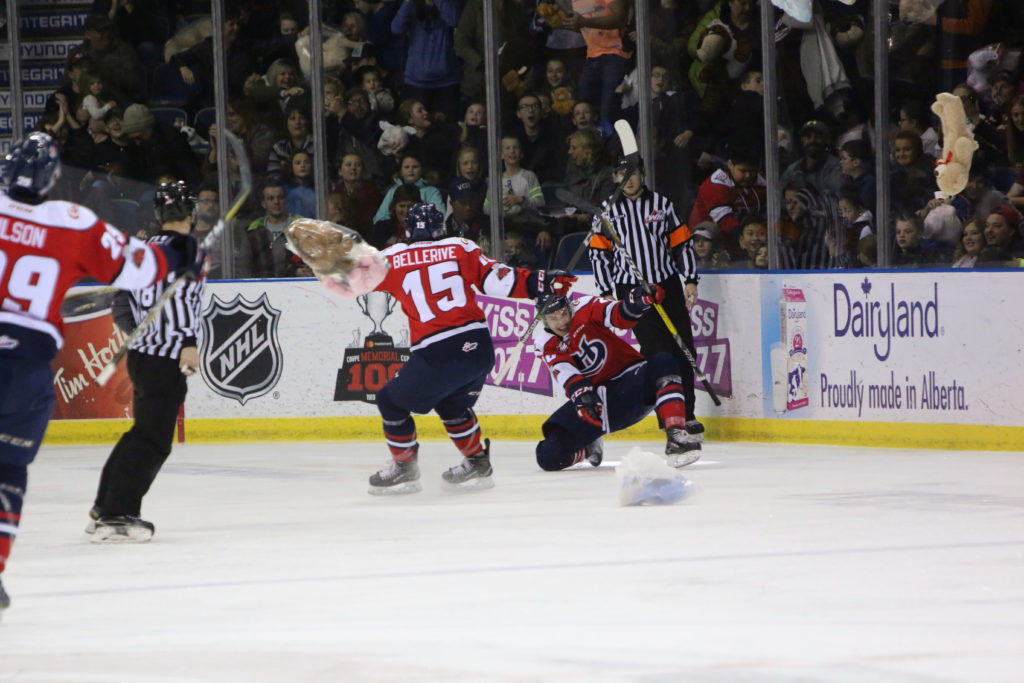 Lethbridge, AB – The Lethbridge Hurricanes completed a three-game homestand on Saturday with a 4-1 win over the Victoria Royals on the 22nd Annual Canadian Tire Teddy and Toque Toss.

The Hurricanes had a strong first period despite being shorthanded three times in the opening frame. Victoria, who had the most power play opportunities in the league entering the game, were unable to strike on their chances. The ‘Canes did strike while shorthanded as Jake Elmer sent the bears and toques flying with the Teddy Bear Toss goal 6:23 into the game on a breakaway slipping one five-hole on Griffen Outhouse to make it 1-0 Lethbridge; Jordy Bellerive, who scored the Teddy Bear Toss goal last year, earned the lone assist on the goal this season. The ‘Canes outshot the Royals 10-8 in the first period.

The ‘Canes were outstanding in the second period as they outshot the Royals by a healthy 24-10 mark. Lethbridge added to their lead early in the period as Elmer redirected a Ty Prefontaine point shot through the legs of Outhouse just 1:29 into the period to make it 2-0 ‘Canes; Josh Tarzwell earned the secondary assist on the goal. The Hurricanes made it 3-0 at the 14:21 mark as Prefontaine stepped in from the line and sniped home his first ever Western Hockey League goal – Giorgio Estephan and Zane Franklin picked up the assists as the ‘Canes led 3-0 after forty minutes.

Early in the third period, the Royals struck to break Skinner’s shutout bid 2:49 into the frame to make it a 3-1 lead for the Hurricanes. Victoria pressed in the third in hopes of a comeback as they outshot the ‘Canes 12-10 in the in the final frame. Royals pulled the goaltender late in the game but Prefontaine was able steal the puck away from a Royal player and find an empty net goal to make it a 4-1 final.

The win for the Hurricanes is their fifth victory in their last six games. The win improved the ‘Canes record to 12-13-1-0 on the season and 8-6-1-0 on home ice.

The Hurricanes complete their three-in-three weekend on Sunday at 4:00pm as they travel to Edmonton to take on the Oil Kings. The ‘Canes are 1-1-0-0 against Edmonton this season. Tune in on 106.7 ROCK beginning at 3:45pm for the pre-game show.