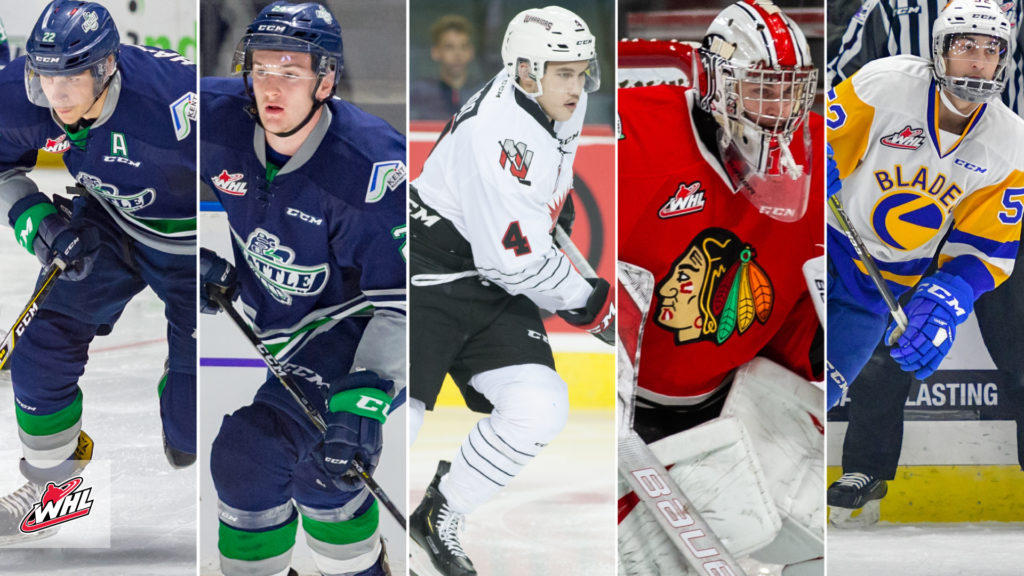 When all 22 Western Hockey League teams are put under one roof, a trade is almost guaranteed.

That was proven true multiple times Thursday, May 2 at the 2019 WHL Bantam Draft in Red Deer, Alta. as 19 deals were completed throughout the day.

The biggest moves were arguably made by the Calgary Hitmen and Kelowna Rockets, with both setting their sights on competing for a WHL Championship and more next season. Hitmen general manager Jeff Chynoweth made a solid add to his blue line with the addition of Vancouver Canucks prospect Jett Woo. Rockets’ general manager Bruce Hamilton made another big play to improve his team’s roster ahead of the 2020 Memorial Cup presented by Kia, adding a pair of 2019 NHL Draft prospects in defenceman Jake Lee and forward Dillon Hamaliuk.

Below is a recap of all of Thursday’s trading action in order from the first deal to last.

In addition to adding a top pick at the draft, the ICE added a veteran defenceman in Harsch. Previously a member of the Blades and Seattle Thunderbirds, Harsch has 57 points (17G-40A) in 178 WHL regular season games, including eight power-play goals. He also comes to the ICE with 33 games of WHL Playoffs experience, winning a WHL Championship with the Thunderbirds in 2017. Harsch is a 6-foot-3, 198-pound product of Grande Prairie, Alta.

The ICE moved up again in Thursday’s WHL Bantam Draft, immediately flipping the third-overall selection and a third-round selection in the 2020 WHL Bantam Draft to the Cougars in exchange for second overall. After selecting Matthew Savoie first overall, the ICE looked to their new home province, selecting forward Conor Geekie.

The Cougars would use the third selection on Sherwood Park product Keaton Dowhaniuk and their fourth-overall pick on forward Koehn Ziemmer, picking up a pair of Albertan players.

The third deal of the first round saw the Kelowna Rockets move down in the draft to acquire defenceman Sean Comrie.

Kelowna sent the fifth-overall pick to the Brandon Wheat Kings in exchange for 10th overall and Comrie.

Comrie, a 2000-born defenceman from Edmonton, Alta. was selected in the second round, 44th overall, by Brandon at the 2015 WHL Bantam Draft. In the 2017-18 season, Comrie played with the Alberta Junior Hockey League’s Spruce Grove Saints, posting 34 points (7G-27A) in 54 regular season games and helping his team win the AJHL Championship.

In a bid to strengthen their roster ahead of the 2020 Memorial Cup presented by Kia, the Rockets came together on a blockbuster trade with the Seattle Thunderbirds.

Lee is ranked 146th among North American skaters and recorded 24 points (3G-21A) in 67 regular season games with the Thunderbirds last season. The 2001-born rearguard is a product of Sherwood Park, Alta. and was selected 18th overall at the 2016 WHL Bantam Draft.

Hamaliuk was ranked by NHL Central Scouting for most of the season and named to the roster for the 2019 Sherwin-Williams CHL/NHL Top Prospects Game in Red Deer, Alta. However, a lower-body injury ended his season on December 29, 2018. He had 26 points (11G-15A) in 31 games after posting 39 points (15G-24A) in his rookie season. A product of Leduc, Alta., the 2000-born forward was selected by the Thunderbirds in the sixth round, 111th overall, at the 2015 WHL Bantam Draft.

Goaltender Cole Schwebius makes for a crowded crease with the Rockets, who already have Roman Basran and James Porter. The 2001-born product of Kelowna, B.C. posted a 5-8-2-0 record in 17 games with Seattle last season, managing a 3.89 goals-against average and a .886 save percentage.

With a strong group of 20-year-old players, the Calgary Hitmen made their first push of the off-season to improve their roster for September, acquiring Vancouver Canucks prospect Jett Woo from the Moose Jaw Warriors.

In acquiring Yeryomenko, the Warriors added a veteran presence on their blue line, which could likely see the departure of Josh Brook to the Montreal Canadiens organization next season.

Yeryomenko was selected in the fifth round, 151st overall, by the Predators at last June’s NHL Draft. The product of Vitebsk, Belarus had 33 points (7G-26A) in 63 games last season and has 99 points (26G-73A) for his 188-game WHL regular-season career.

Also headed to the Warriors in the deal is the young Korczak. A product of Yorkton, Sask., Ryder was selected by the Hitmen in the second round, 29th overall, at the 2017 WHL Bantam Draft. He had 15 points (8G-7A) in 50 games with the Hitmen this season.

The Vancouver Giants and Lethbridge Hurricanes swapped third-round selections. The Hurricanes acquired the 65th overall pick in the 2019 WHL Bantam Draft for their selection in the same round in 2021.

Royals bolster crease with addition of Farkas from Winterhawks

Shane Farkas is a member of the Victoria Royals following a Thursday deal with the Portland Winterhawks.

As part of the deal, Portland also sent the 102nd pick in Thursday’s Bantam Draft to the Royals while receiving the 80th selection in the Bantam Draft. With the pick, the Winterhawks would select Kamloops, B.C. product Carter Streek. The Royals used the acquired pick to select Regina, Sask. forward Carter Briltz.

After moving up in the first round of Thursday’s WHL Bantam Draft, the Brandon Wheat Kings elected to move down in the second round.

Making a deal with the Red Deer Rebels, Brandon acquired the 31st and 75th overall selections in exchange for the 23rd overall pick.

The ICE made another addition to their core of overage players, acquiring Andover, Minn. product Isaac Johnson from the Tri-City Americans.

Johnson found offensive success in his two seasons with the Americans, posting 80 points (29G-51A) in 99 WHL regular season games. During the 2018 WHL Playoffs, Johnson had 13 points (5G-8A) in 14 games as the Americans advanced to the Western Conference Championship.

The Kelowna Rockets made a move for beyond their hosting of the 2020 Memorial Cup presented by Kia, acquiring three selections from the Brandon Wheat Kings.

The Rockets then used the picks on Maxwell Sanford of Williams Lake, B.C. Jackson Smith of Calgary, Alta., and Daimon Gardner of Winnipeg, Man.

The Seattle Thunderbirds and Everett Silvertips struck another deal, sending goaltender Blake Lyda down Interstate 5. In exchange, the Silvertips acquired a third-round selection in the 2021 WHL Bantam Draft.

With the pick, the Hurricanes selected Jakin Lawrence, a forward from Rosetown, Sask.

In a deal with the Everett Silvertips, the Blazers moved pick 149 in exchange for a seventh-round pick in 2021. Everett then selected goaltender Ian Mills from Calgary, Alta.

Dealing with the Saskatoon Blades, Bardsley swapped pick 160 to the Blades in exchange for an eighth-round pick in 2021. Saskatoon selected Pavel Bocharov with the pick.

In a trade with the Kelowna Rockets, Bardsley dealt pick 204 to the B.C. Division rival in exchange for a 10th round selection in 2021. The Rockets used the pick on hometown product Rilen Kovacevic.

The Brandon Wheat Kings made a move for the future with the Portland Winterhawks.

With picks 184 and 190, the Winterhawks selected forward Landon Van Engelen from Tofield, Alta. and Marek Hejduk, a forward from Parker, Colo. Hejduk is the son of former NHL player Milan Hejduk, who won a gold medal with the Czech Republic at the 1998 Winter Olympics and a Stanley Cup with the Colorado Avalanche in 2001.

In the first of two deals to not involve a WHL Bantam Draft selection Thursday, the Lethbridge Hurricanes and Prince George Cougars swapped players from the province of British Columbia.

Phare was the 18th overall selection in the 2017 WHL Bantam Draft and had appeared in 16 games for his WHL career. O’Brien played this past season with the Cariboo Cougars in the B.C. Major Midget League (BCMML). The 16-year-old collected seven points (2G-5A) in 40 games, as he helped the Cougars capture the BCMML championship. O’Brien is the younger brother of former Prince George Cougar Brogan O’Brien.

The Swift Current Broncos acquired hometown product Wyatt Wilson from the Lethbridge Hurricanes in a deal Thursday. Heading the other way in the trade is Fort Saskatchewan, Alta. product Alex Thacker.

For all trade details visit the WHL’s Transactions page.