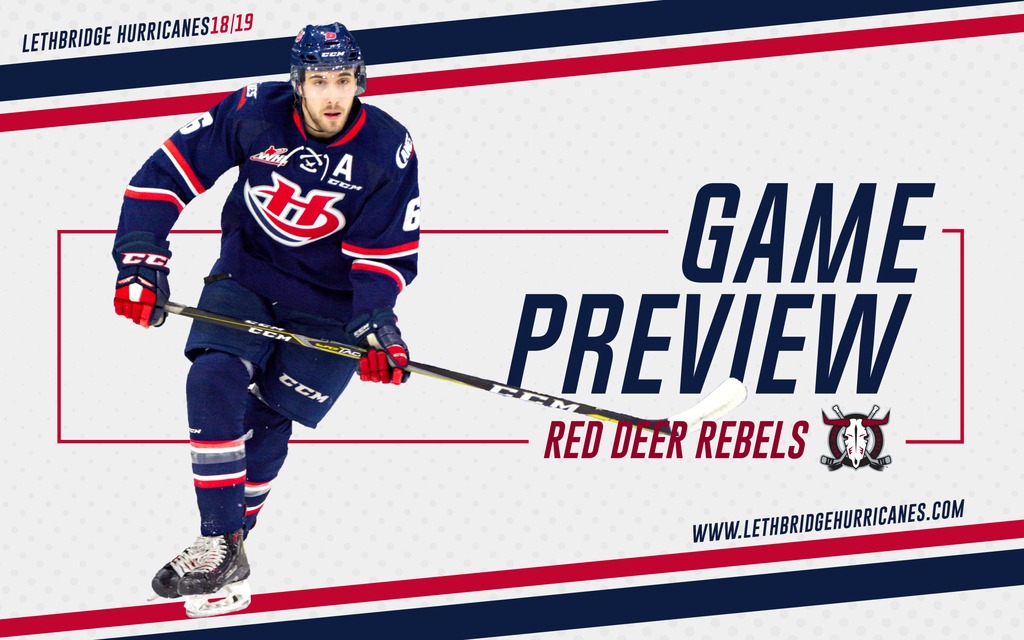 Lethbridge, AB – The Lethbridge Hurricanes return to action tonight as they welcome the Red Deer Rebels to the ENMAX Centre at 7:00pm in the first of a home-and-home.

The Hurricanes (23-12-4-4) are coming off a three-in-three weekend in which they went 1-2-0-0 with a pair of losses to the Edmonton Oil Kings. The ‘Canes were last in action on Sunday when they fell 4-1 to the Oil Kings at Rogers Place. Jake Elmer scored the lone goal in the defeat.

The Rebels (25-13-2-1) have been off since a 9-4 win Regina last Saturday against the Pats. Red Deer enters tonight’s game just one point back of the Hurricanes for second in the Central Division and are riding a three-game winning streak.

Tonight will be the third of six meetings on the season between the ‘Canes and Rebels; Lethbridge has posted a 1-0-0-1 record against Red Deer so far this season. The ‘Canes are an impressive 17-3-1-1 in the last 22 head-to-head meetings dating back to February of 2015.

Tickets for tonight’s game, which is the last home game in January, can be purchased online at www.enmaxcentre.ca, by calling 403-329-SEAT (7328) or by visiting the ENMAX Centre or Yates Ticket Centre’s.

VS. REBELS: Tonight will be the third of six meetings on the season between the Hurricanes and the Rebels. The Hurricanes have posted a 1-0-0-1 record in two games this season with the home team winning both games in extra time. The ‘Canes are 15-3-1-1 in the last 20 head-to-head meetings against Red Deer.