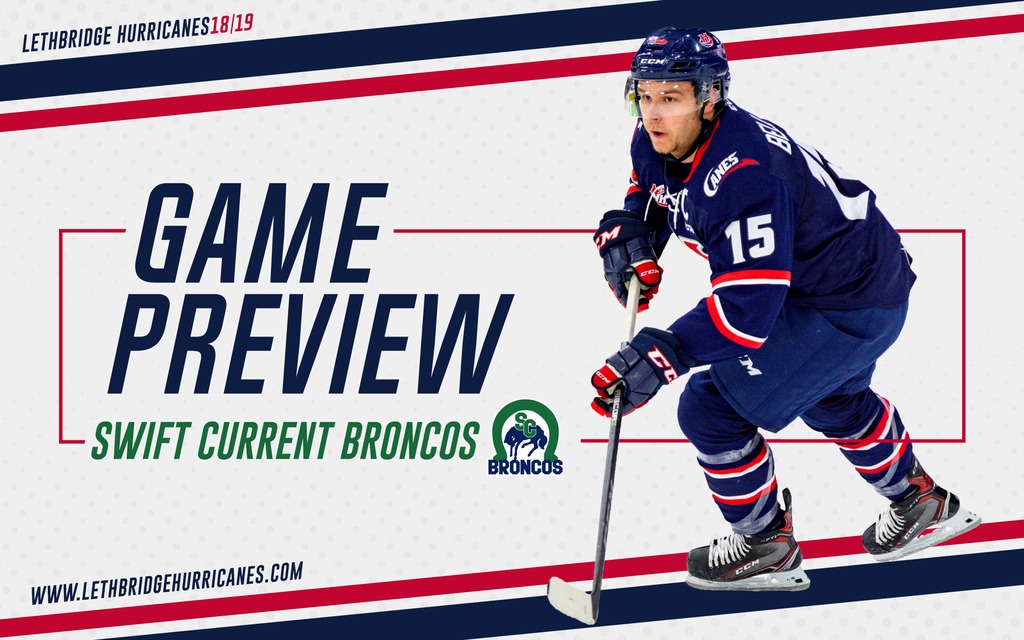 Lethbridge, AB – The Lethbridge Hurricanes return to the ENMAX Centre after a four game road trip tonight as they welcome the Swift Current Broncos for the 23rd Annual Canadian Tire Toque and Teddy Toss at 7:00pm.

The Hurricanes (11-8-3-2) have been off since a 3-2 overtime loss last Saturday in Moose Jaw to the the Warriors. Taylor Ross and Keltie Jeri-Leon scored in the losing cause while Reece Klassen made 33 saves. On Thursday, the ‘Canes acquired forwards Jake Leschyshyn and Nick Henry from the Regina Pats; both will make their Hurricanes debut tonight. The ‘Canes are 6-4-0-2 on home ice this season.

The Broncos (4-19-1-1) were handed a 5-1 loss on Wednesday to the Brandon Wheat Kings in Swift Current. Alec Zawatsky scored the lone goal in the defeat while Joel Hofer made 33 saves in the game. The Broncos are 1-1-0-0 in their last two games after earning their first regulation win of the season on Saturday against the Edmonton Oil Kings.

Tonight will be the second of four meetings on the season between the ‘Canes and the Broncos; Swift Current earned an overtime victory in their only meeting back on November 2nd.

There are less than 600 tickets remaining for tonight’s game. You can purchase yours online at www.enmaxcentre.ca, by calling 403-329-SEAT (7328) or by visiting the ENMAX Centre Ticket Centre.

Fans are encouraged to bring a plush toy, wrapped in plastic, to be thrown on the ice when the Hurricanes score their first goal of the game. All toys will be donated to various charities in our region. The ‘Canes have set a goal of 4,500 bears to be collected this year.

VS. BRONCOS: Tonight will be the second of four meetings on the season between the Hurricanes and the Broncos. Swift Current earned a 5-4 overtime victory in the lone meeting of the season this year on November 2nd. The Hurricanes are 1-3-1-0 in the last five regular season games against the Broncos.