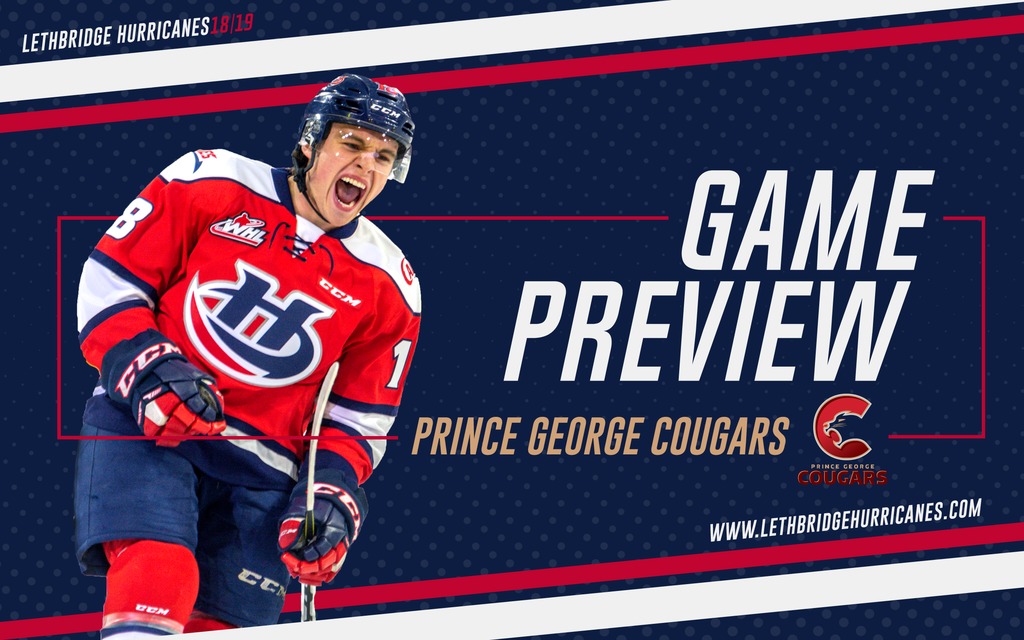 Lethbridge, AB – The Lethbridge Hurricanes return to the ENMAX Centre tonight at 7:00pm as they welcome the Prince George Cougars.

The Hurricanes (3-4-0-1) are coming off a 6-5 loss last night to the Calgary Hitmen at Scotiabank Saddledome. Logan Barlage scored twice while Jake Elmer, Zach Cox and Jadon Joseph scored in the loss. Carl Tetachuk made his first WHL appearance after relieving starter Reece Klassen in the game; Tetachuk made 26 saves while taking credit for the loss.

The Cougars (2-5-0-1) enter having suffered a 4-1 loss last night in Medicine Hat to the Tigers. Overage forward Josh Curtis scored the lone Prince George goal in the defeat. Taylor Gauthier made 26 saves in the losing cause. Tonight will be the second of a three-in-three Central Division road trip.

Tonight will be the only meeting of the season between the Hurricanes and the Cougars. The ‘Canes and Cougars split a pair of games last year in Prince George.

Tickets for tonight’s game are available online at www.enmaxcentre.ca, by calling 403-329-SEAT (7328) or by visiting the ENMAX Centre or Yates Ticket Centre’s.

Roster Trimming: The Hurricanes waived overage defenseman Matthew Stanley who was claimed by the Swift Current Broncos before their traded forward Owen Blocker back to the Broncos for an eighth round draft pick in 2019. The ‘Canes also put import goaltender Akira Schmid on waivers on Oct. 1st and re-assigned defenseman Tyler Lowe on October 5th.

Home Cooking: The Hurricanes begin a stretch where they will play seven of their next nine games at the ENMAX Centre. The ‘Canes have posted an impressive 72-29-6-3 regular season record over the last four seasons. The ‘Canes are 1-2-0-1 so far this year.

Seeing Double: The Hurricanes have twin brothers on their roster for the first time ever. Adam and Justin Hall were both drafted in the 2016 WHL Bantam Draft. They are the first brother tandem to suit up together for the ‘Canes since Axel and Albin Blomqvist in 2012-13. Adam was born before Justin, by just two minutes.

Great Experience: Three Hurricanes players attended NHL Training Camps. Captain Jordy Bellerive and Calen Addison were with the Pittsburgh Penguins. Both appeared in one pre-season game with the Penguins; Addison earned an assist in his lone appearance. Defenseman Igor Merezhko was with the Calgary Flames.