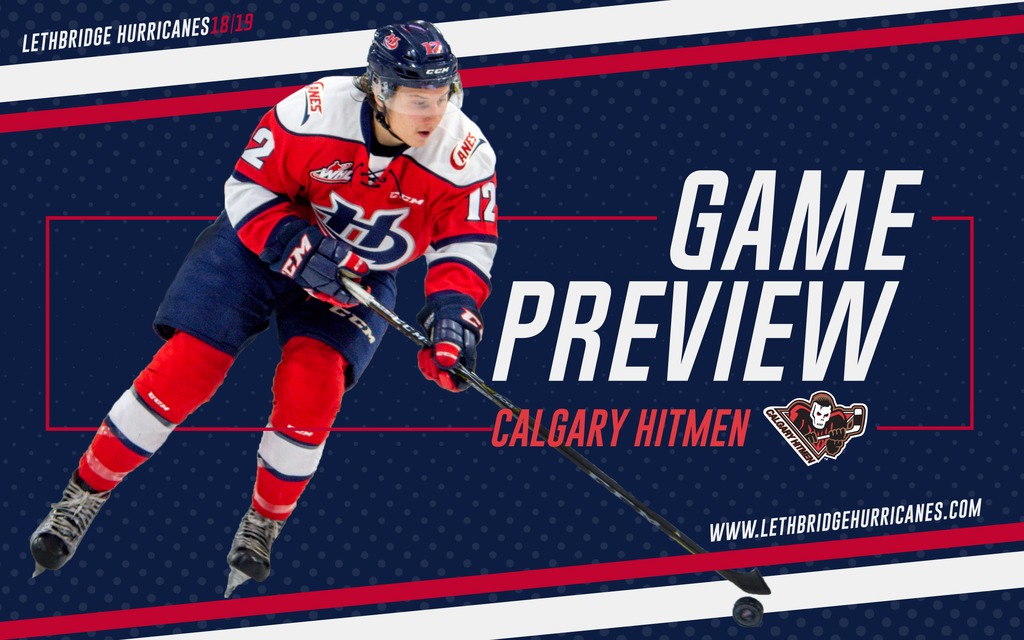 Lethbridge, AB – The Lethbridge Hurricanes begin a stretch of three straight games on the road tonight as they visit the Calgary Hitmen at 7:00pm at Scotiabank Saddledome.

The Hurricanes (6-4-1-2) are coming off a 2-1 victory on Tuesday over the Brandon Wheat Kings at the ENMAX Centre. Jadon Joseph and Taylor Ross scored in the win while Carl Tetachuk made 34 saves for his first WHL victory. The Hurricanes enter tonight’s game having won two straight games and have posted a 3-0-1-1 record in their last five games.

The Hitmen (4-7-2-0) were handed a 3-1 setback in Red Deer on Tuesday; Egor Zamula scored the lone goal. Calgary has posted a 4-2-1-0 record in their last seven games which dates back to a 6-5 victory over the Hurricanes at Scotiabank Saddledome on October 12th. The Hitmen have won five straight games against the ‘Canes dating back to last year.

Tonight’s game can be heard on 106.7 ROCK or viewed at Browns Socialhouse in Lethbridge.

VS. HITMEN: Tonight will be the second of six meetings on the season between the Hurricanes and the Hitmen. Calgary earned a 6-5 win against Lethbridge at Scotiabank Saddledome two Friday’s ago. The Hurricanes have dropped five straight game against the Hitmen dating back to last season.

5 Straight: The Hurricanes have collected at least a single point in each of their last five games having posted a 3-0-1-1 record in that span. The ‘Canes have added a point in seven of eight games with a 4-1-1-2. Overall, Lethbridge has posted a 6-4-1-2 record on the season.

200 Club: Hurricanes captain Jordy Bellerive recorded his 200th WHL point on Saturday, October 20th against the Medicine Hat Tigers. The North Vancouver product has 200 career points (91g-109a) along with 263 penalty minutes in 219 regular season games. Bellerive is the 20th Hurricane in franchise history to reach the 200-point plateau. He sits three points back of Cam Braes for 19th in all-time ‘Canes scoring.