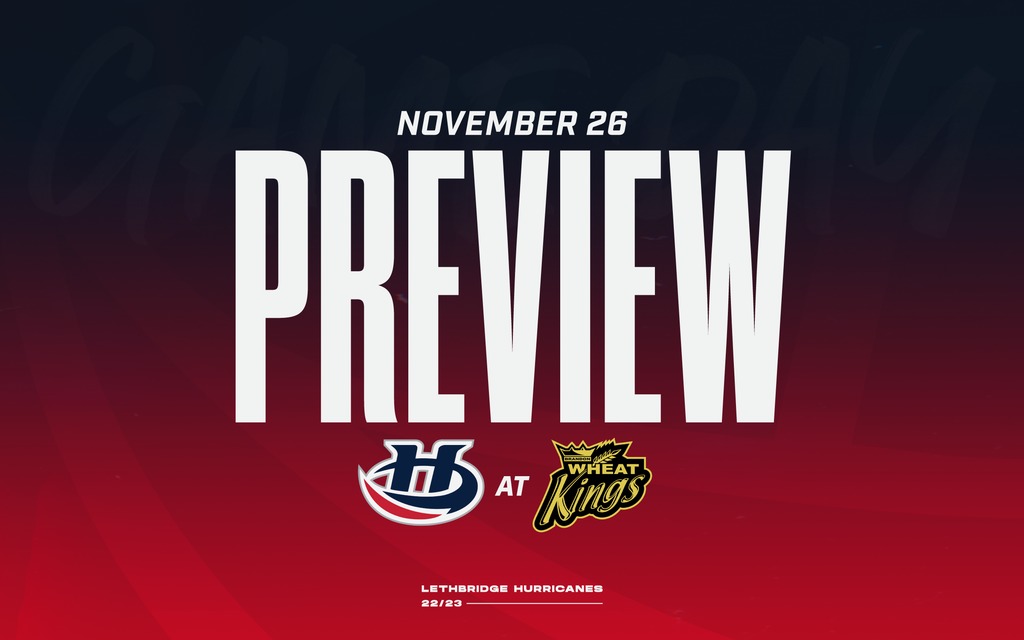 Brandon, MB – The Lethbridge Hurricanes continue a six-game road trip tonight with the final of four in Manitoba as they face the Brandon Wheat Kings at 6:00pm MT at Westoba Place for the second straight night.

The Hurricanes (13-10-0-1) enter after earning a 4-3 victory on Friday against the Brandon Wheat Kings in the first of a pair of back-to-back games. Tyson Laventure and Logan McCutcheon each had three points in the win while Harrison Meneghin made a 37-saves in the victory. Lethbridge enters tonight with a 6-6-0-0 record on the road while are 8-2-0-1 in their last 11 games.

The Wheat Kings (8-14-2-0) enter having lost five of their last six games after the 4-3 loss to the Hurricanes on Friday. Mason Ward, Nate Danielson and Calder Anderson scored in the losing cause while Carson Bjarnason made 33-saves. Brandon enters tonight 2-10-1-0 in their last 13 games and are 2-6-2-0 at home.

Tonight will be the third of four meetings on the season between the Hurricanes and Wheat Kings; Lethbridge is 1-1-0-0 in two games against the Wheat Kings this season as the road team has won both contests.

Tonight’s game can be watched at Browns Socialhouse in Lethbridge, on WHL Live or heard on 106.7 ROCK.

Streakin’: The Hurricanes enter play tonight having posted an 8-2-0-1 record in their last 11 games after earning a 4-3 victory over the Brandon Wheat Kings on Friday. In their previous ten games, the ‘Canes had posted a record of 3-7-0-0. Lethbridge is currently 2-1-0-0 on a six-game road trip.

Big Trip: The ‘Canes opened a six-game road trip on Tuesday with a win in Winnipeg. Lethbridge will play four games in Manitoba before a pair in Washington State. By the time the ‘Canes return home, they’ll have traveled roughly 4,200 kilometres in two weeks.

Rookie Tendy: Hurricanes netminder Harrison Meneghin who was named the WHL Goaltender of the Week for his efforts the week of November 12th has been outstanding this season posting an 8-3-0-1 record with a 2.18 goals against average and a .926 save percentage. Meneghin has won his last five starts posting a 1.57 GAA and a sparkling .952 SV%.

Faceoff King: Jett Jones enters tonight as the WHL leader in faceoffs taken this season with 601 draws taken. The Olds, AB, product has won 20+ faceoffs in a game three times this season, becoming the first Hurricanes centre-man to accomplish that feat on three occasions since the WHL began tracking faceoffs in 2017, surpassing Jake Leschyshyn and Giorgio Estephan – who both did it twice.

First All-Time: The 2022-2023 season is Brent Kisio’s eighth season as the head coach of the Hurricanes. Kisio has posted a 249-164-39 regular season record and sits first all-time in coaching victories in Hurricanes’ franchise history. Kisio is the longest serving head coach in the WHL. He is also the seventh winningest coach among active WHL bench bosses.