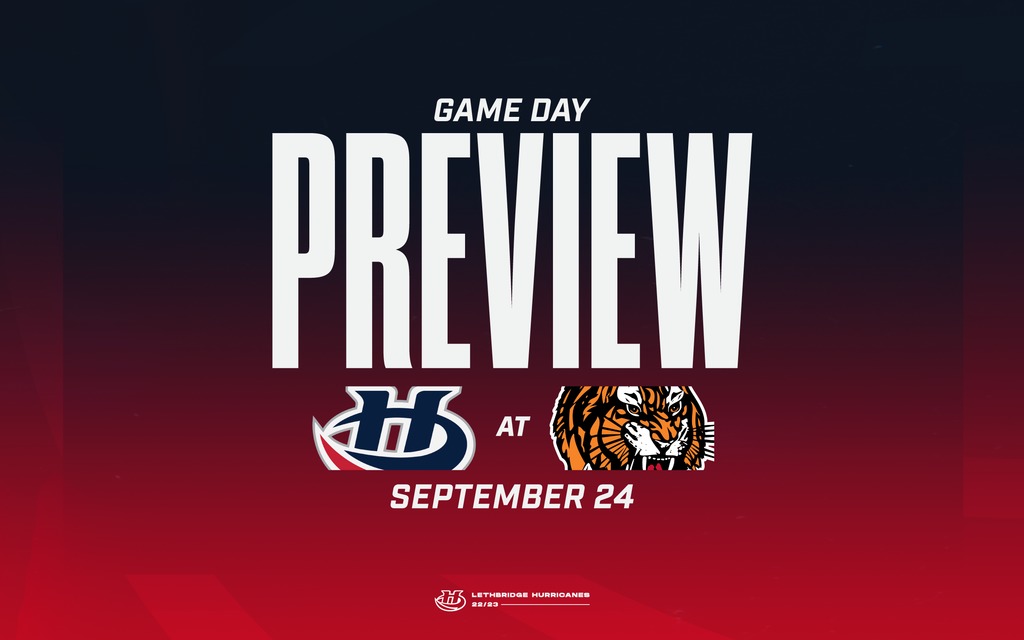 Lethbridge, AB – The Lethbridge Hurricanes will open the 2022-2023 regular season tonight at 7:00pm when they visit the Medicine Hat Tigers at Co-op Place.

The Hurricanes finished the 2022 ENMAX Pre-Season with a 3-0-1-0 record after sweeping a pair of games last weekend against the Red Deer Rebels. The ‘Canes were led by Logan Wormald and Tristan Zandee who shared the point-scoring lead with six points each in the exhibition season while Jared Picklyk and Harrison Meneghin both posted above .930 save percentages in the tune up sked. Lethbridge outscored the opposition 19-13 in the four games.

The Tigers wrapped up their four-game exhibition season with a record of 3-1-0-0 after winning a pair of games against the Swift Current Broncos last weekend. Medicine Hat finished the pre-season with eight players at-or-above a point-per-game pace, including Dallon Melin, Brendan Lee and Gavin McKenna who tied for the team lead with four points each.

Tonight will be the first of eight head-to-head meetings between the Hurricanes and Tigers in the 2022-2023 regular season. Lethbridge posted an 8-0-0-0 record against Medicine Hat last year. Tonight’s game can be watched at Browns Socialhouse in Lethbridge, on WHL Live or heard on 106.7 ROCK.

VS. TIGERS: Tonight will be the first of eight head-to-head meetings between the Hurricanes and Tigers. The Hurricanes posted a 1-0-1-0 record in two exhibition games against the Tigers. Last year, Lethbridge was a perfect 8-0-0-0 against Medicine Hat, marking the first time in franchise history the ‘Canes swept the season series against the Tigers. Lethbridge has posted an all-time record of 132-141-5-10 with 7 ties against Medicine Hat, including a 58-81-4-2 record with four ties in the Gas City.

NEWS & NOTES:
Tune Up Complete: The Hurricanes posted an impressive 3-0-1-0 record in their four-game pre-season. The ‘Canes earned wins against Medicine Hat and a pair against Red Deer. Lethbridge outscored their opposition 19 to 13 in the four games, an average of 4.75 to 3.25 per game.

Shep-Repped: On Wednesday, the ‘Canes announced the acquisition of overage forward Cole Shepard from the Vancouver Giants in exchange for a third-round draft pick in 2023. Shepard had 20 points (7g-13a) in 28 games in 2021-2022 with the Giants. He is the younger brother of former Hurricanes forward Jackson Shepard who spent the 2018-2019 season in Lethbridge.

Good Showing: The ‘Canes had five players average at or above a point-per-game pace in the 2022 ENMAX Pre-Season. Logan Wormald (3g-3a) and Tristan Zandee (3g-3a) tied for the team lead in goals and points while Brayden Edwards (1g-4a) and Hayden Smith (1g-4a) also finished above a point-per-game pace while defenceman Chase Pauls had three points (1g-2a) in three games.

AA: Hurricanes have added European forward Anton Astashevich. The Belarus-born forward spent the 2021-2022 season with the Calgary Hitmen totaling seven points (2g-5a) in 45 regular season games. Astashevich will be the only import on the Hurricanes roster. He had two points (1g-1a) in three pre-season games.

Off-Season Moves: Over the off-season, the ‘Canes made a collection of trades, including the acquisition of 2002-born forward Cole Carrier from the Regina Pats in exchange for a sixth-round draft pick in 2023. Carrier appeared in 65 games in 2021-2022 with the Pats totaling 27 points (15g-12a). The ‘Canes also traded forward Reid MacKay and Briley Wood and defenceman Easton Kovacs for draft picks.