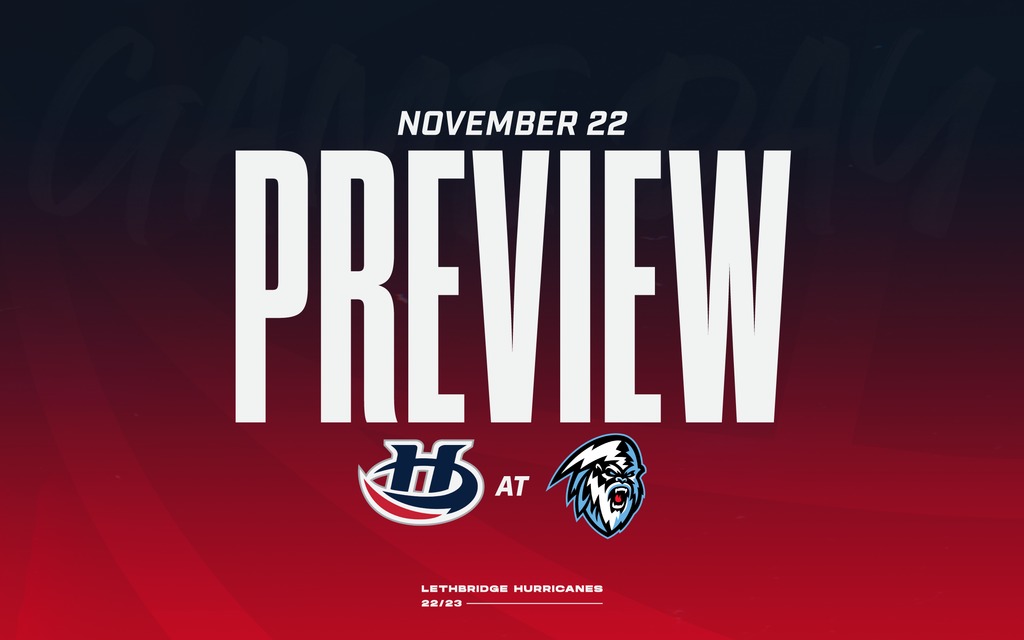 Winnipeg, MB – The Lethbridge Hurricanes open a six-game road trip tonight at 6:00pm MT as they visit the Winnipeg ICE for the first of two-straight games.

The Hurricanes (11-9-0-1) enter having had a four-game winning streak snapped on Saturday with a 4-2 loss to the Edmonton Oil Kings at the ENMAX Centre. Tyson Zimmer and Cole Shepard scored in the losing cause while goaltender Bryan Thomson made 25-saves in his season debut. The ‘Canes enter tonight 6-1-0-1 in their last eight games and are 4-5-0-0 on the road this season.

The ICE (20-1-0-0) enter on a 15-game winning streak after earning 5-2 victory over the Regina Pats on Saturday. Zach Benson scored twice while Connor McClennon, Conor Geekie and Ty Nash scored the other goals in the win. Winnipeg will play game nine of a ten-game homestand tonight; the ICE are a perfect 8-0-0-0 at home this season.

Tonight will be the first of two-straight games between the Hurricanes and ICE and the second of four meetings on the season; Lethbridge has posted an 0-1-0-0 record against Winnipeg so far this season. Tonight’s game can be watched at Browns Socialhouse in Lethbridge, on WHL Live or heard on 106.7 ROCK.

VS. ICE: Tonight will be the second of four meetings on the season between the Hurricanes and ICE. Lethbridge has posted an 0-1-0-0 record this season against Winnipeg after going 1-3-0-0 against Winnipeg last year. The Hurricanes will visit Winnipeg on back-to-back nights, tonight and tomorrow. Lethbridge has posted an all-time record of 79-75-5-3 with six ties against the ICE franchise while going 2-1-0-1 in four games in Winnipeg.

Thomson Back: Overage goaltender Bryan Thomson made his season debut on Saturday in the loss to the Oil Kings at the ENMAX Centre. Thomson missed the first 20 games of the season after recovering from off-season hip surgery. The Moose Jaw, SK, product enters tonight with 94 career games played.

Tight Games: Entering tonight, the Hurricanes have played to a one-goal margin in 12 of their last 14 games. The ‘Canes have gone 7-4-0-1 in those 12 one-goal games and have posted an 8-4-0-1 record in one-goal games this season. Lethbridge went 16-6-4-1 in single goal games last year.

Warm Worm: Logan Wormald enters play tonight on a seven-game point scoring streak after earning an assist on Saturday against Edmonton. The Langley, BC, product has picked up 10 points (5g-5a) on his seven-game point streak, which has matched a career-long stretch.

Faceoff King: Jett Jones enters tonight as the WHL leader in faceoffs taken this season with 519 draws taken. The Olds, AB, product has won 20+ faceoffs in a game three times this season, becoming the first Hurricanes centre-man to accomplish that feat on three occasions since the WHL began tracking faceoffs in 2017, surpassing Jake Leschyshyn and Giorgio Estephan – who both did it twice.