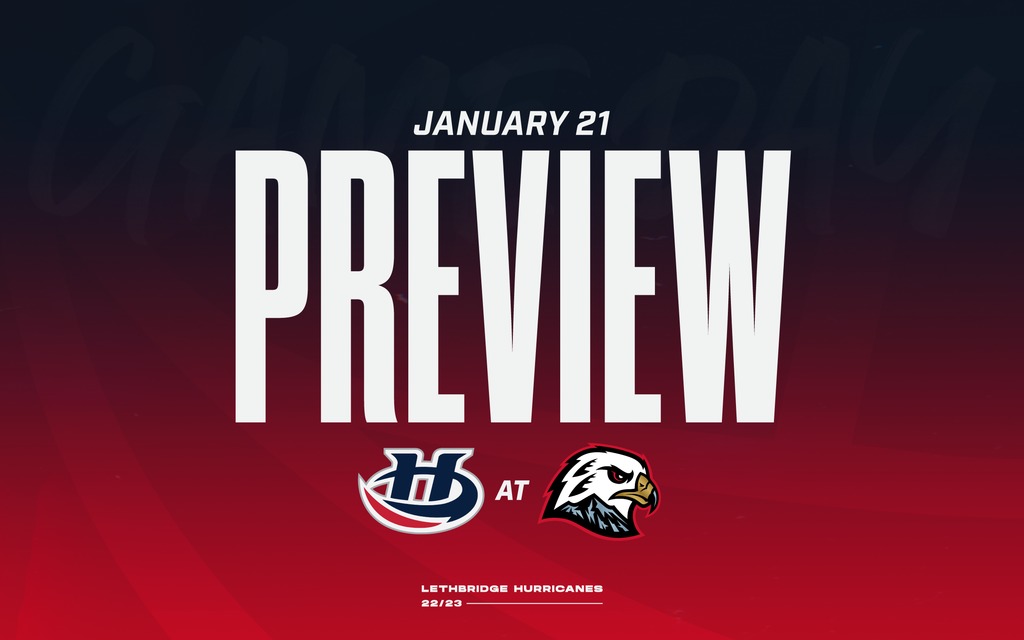 Portland, OR – The Lethbridge Hurricanes will end a four-game road trip tonight at 7:00pm MT as they play the 2,500th game in team history against Portland Winterhawks at the Veterans Memorial Coliseum.

The Hurricanes (24-15-3-2) enter on a seven-game point streak having gone 3-0-3-1 in that span after suffering their second-straight overtime loss on Friday falling 3-2 in Seattle. Hayden Smith and Cole Shepard scored the goals while Bryan Thomson made 25-saves in the defeat. Lethbridge enters 8-3-2-0 in their last 13 road games and are 11-8-2-0 on the road this season.

The Winterhawks (29-18-2-1) ended a two-game losing streak on Friday with a wild 7-6 overtime win over the Victoria Royals in their return home from their six-game East Division road trip. James Stefan, Robbie Fromm-Delorme and Gabe Klassen all scored twice while Kyle Chyzowski netted the overtime winner. Dante Gianuzzi made 29-saves in the victory. Portland enters 18-1-1-1 this season having won their last eight home games.

Tonight will be the only meeting of the season between the Hurricanes and Winterhawks and the first meeting since October 4th, 2019. Lethbridge has posted a 3-1-0-0 record in the last four meetings against Portland. Tonight’s game can be watched at Browns Socialhouse in Lethbridge, on WHL Live or heard on 106.7 ROCK.

VS. WINTERHAWKS: Tonight will be the only meeting of the season between the Hurricanes and Winterhawks while it will be their first meeting since October 4th, 2019. Tonight will be Lethbridge’s first visit to Portland since January of 2019. The Hurricanes have posted a 3-1-0-0 record in the last four head-to-head meetings against the Winterhawks. Lethbridge is 20-19-2-0 with five ties all-time against Portland, including going 7-13-0-0 with two ties in the Rose City.

Road Trippin’: The Hurricanes will end a four-game road trip tonight against the Winterhawks. It’s the first visit to the Pacific Northwest since January of 2019. The ‘Canes are 1-0-2-0 on the road trip so far. Lethbridge will span roughly 3,000 kilometres (1,870 miles) on their week-long trip.

Cen-tendy: Overage goaltender Bryan Thomson enters tonight’s game sitting at 99 career games played in his WHL career. With his next appearance, the Moose Jaw, SK, product will become just the eighth netminder in Hurricanes history to play 100+ games, the last to reach that make is the all-time leader in Stuart Skinner (182GP). Thomson is also two wins shy of becoming the seventh goalie in ‘Canes history to reach the 50-win mark.

Strong PK: Entering tonight, the Hurricanes have allowed just three power play goals against in their last 12 games having killed 43-of-46 penalties taken in that span for a kill rate of 93.5%. Oppositions have gone just 8-for-67 in the last 18 games – resulting in an 88.1% kill rate for the Hurricanes in that span.

Central Scouting: A trio of Hurricanes – Noah Chadwick (147th), Logan Wormald (160th) and Harrison Meneghin (27th) – were ranked among North American Skaters and Goaltenders by the NHL Central Scouting Service’s Midterm Rankings. Chadwick and Wormald were ranked as ‘C’ Skaters on the Preliminary Players to Watch List while Meneghin was previously unranked.

Rookie Tendy: Hurricanes netminder Harrison Meneghin enters tonight with a 18-8-2-1 record, sitting two wins shy of becoming the 14th goalie in ‘Canes history to reach 20-wins in a season – he would become just the fourth rookie goaltender to reach that mark. He enters tonight 16-5-2-1 record in his last 24 starts.

Faceoff King: Jett Jones enters tonight as the WHL leader in faceoffs taken this season with 1,106 draws taken, averaging 25.1 draws per game. Jones has won 20+ faceoffs in a game four times this season, becoming the first Hurricanes centre-man to accomplish that feat on four occasions since the WHL began tracking faceoffs in 2017, surpassing Jake Leschyshyn and Giorgio Estephan – who both did it twice.