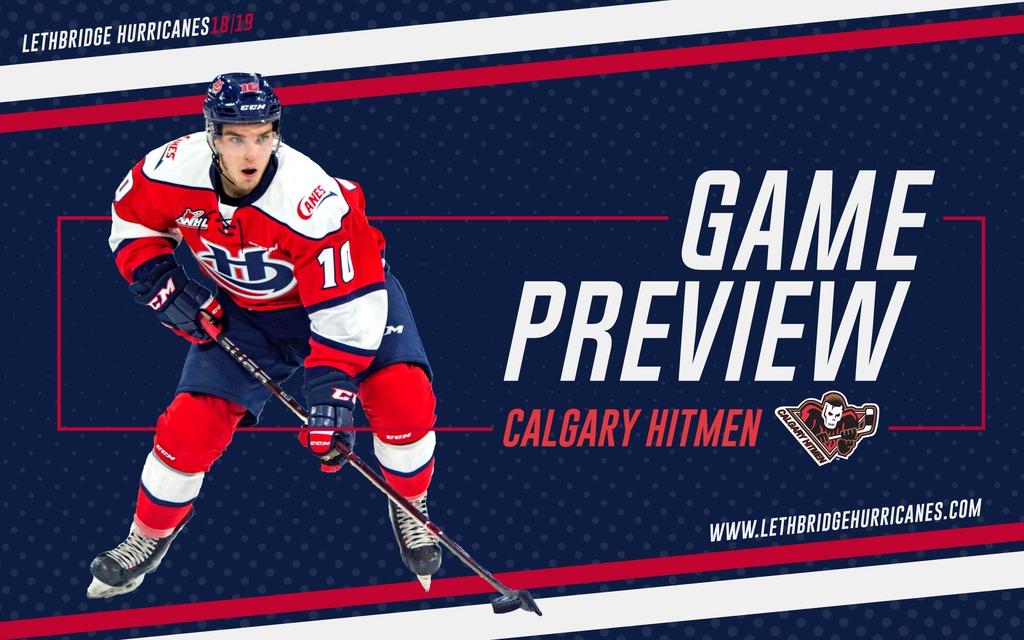 Lethbridge, AB – The Lethbridge Hurricanes begin a two-game weekend tonight as they travel to Calgary to face the Hitmen at Scotiabank Saddledome at 7:00pm.

The Hurricanes (3-3-0-1) are coming off a 4-2 victory on Wednesday over the Regina Pats at the ENMAX Centre. The ‘Canes received a pair of goals from newcomer Ty Kolle as well as singles from Jake Elmer and Jordy Bellerive in the win. Reece Klassen picked up his third win of the season making 24 saves in the victory. It was the ‘Canes first home-ice win of the season as they snapped a three-game losing streak.

The Hitmen (0-5-1-0) are winless through six games this season after going a perfect 6-0-0-0 in the pre-season. Calgary enters tonight’s game having been shutout in each of their last two outings after shutout losses to the Red Deer Rebels and the Prince Albert Raiders. Calgary’s leading scorer is Jake Kryski who has four goals and five points in six games.

Tonight will be the first of six head-to-head meetings on the season between the Hurricanes and Hitmen. Last year, the ‘Canes posted a 2-3-1-0 record against Calgary as the Hitmen won the final four meetings of the season.

Tonight’s game can be heard on 106.7 ROCK with Dustin Forbes starting with the pre-game show at 6:40pm.

Roster Trimming: The Hurricanes waived overage defenseman Matthew Stanley who was claimed by the Swift Current Broncos before their traded forward Owen Blocker back to the Broncos for an eighth round draft pick in 2019. The ‘Canes also put import goaltender Akira Schmid on waivers on Oct. 1st and re-assigned defenseman Tyler Lowe on October 5th.

Home Cooking: The Hurricanes begin a stretch where they will play seven of their next nine games at the ENMAX Centre. The ‘Canes have posted an impressive 72-29-6-3 regular season record over the last four seasons. The ‘Canes are 1-2-0-1 so far this year.

Seeing Double: The Hurricanes have twin brothers on their roster for the first time ever. Adam and Justin Hall were both drafted in the 2016 WHL Bantam Draft. They are the first brother tandem to suit up together for the ‘Canes since Axel and Albin Blomqvist in 2012-13. Adam was born before Justin, by just two minutes.

Great Experience: Three Hurricanes players attended NHL Training Camps. Captain Jordy Bellerive and Calen Addison were with the Pittsburgh Penguins. Both appeared in one pre-season game with the Penguins; Addison earned an assist in his lone appearance. Defenseman Igor Merezhko was with the Calgary Flames.