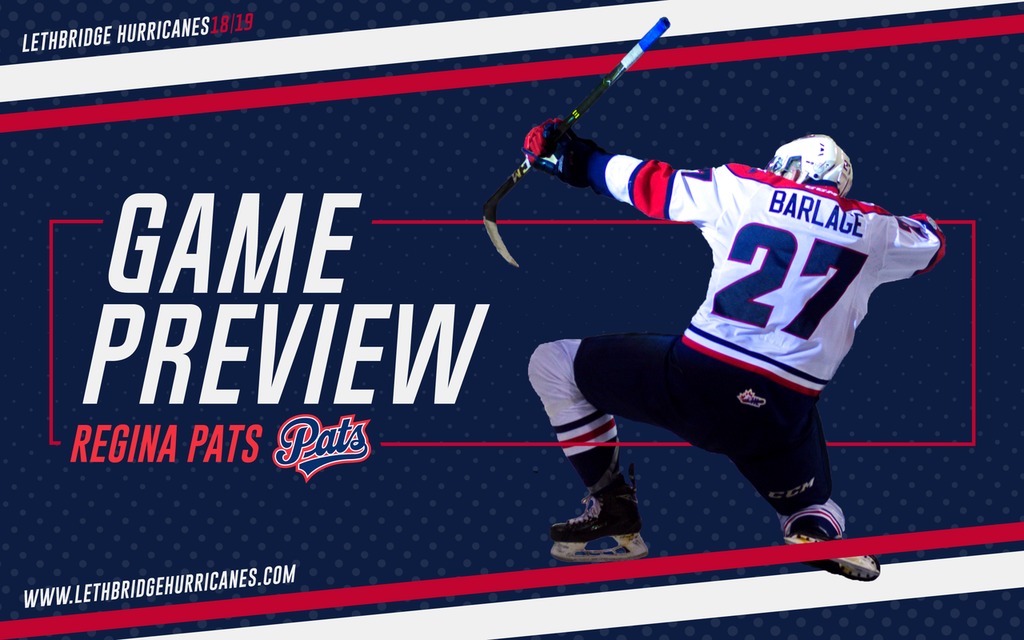 Regina, SK – The Lethbridge Hurricanes make their first of two trips to Regina to face the Pats tonight at 7:00pm at the Brandt Centre.

The Hurricanes (1-1-0-0) are coming off a 4-2 victory in Medicine Hat over the Tigers last Saturday. Keltie Jeri-Leon, Taylor Ross, Dylan Cozens and Jake Elmer scored in that victory while Reece Klassen made 27 saves in the win. The ‘Canes went 0/5 on the power play but were a perfect 8/8 on the penalty kill.

Tonight will be the first of four meetings on the season between the Hurricanes and the Pats. Last year, the teams split the four game season series with the ‘Canes winning the first two before the Pats took the final two.

The game can be heard on 106.7 ROCK starting at 6:40pm with Dustin Forbes or watched on www.whllive.com.

PATS: Tonight will be the first of four meetings on the season between the Hurricanes and the Pats. The ‘Canes posted a 2-2-0-0 record against Regina last season as they earned a 2-0 win in Lethbridge and a 6-2 win in Regina.

NEWS & NOTES:
Ranked: The Hurricanes were ranked third on the CHL Top 10 Rankings heading into the 2018-2019 regular season. The ‘Canes stayed at Number 3 after the first week of the season. The Hurricanes are the top ranked WHL team, while the Spokane Chiefs (7th), Vancouver Giants (8th) and Saskatoon Blades (10th) were also ranked. The Prince Albert Raiders were an Honourable Mention.

Roster Trimming: On Tuesday, the Hurricanes waived overage defenseman Matthew Stanley who was then claimed by the Swift Current Broncos. Then on Wednesday, the ‘Canes traded forward Owen Blocker to the Broncos for an eighth round draft pick in 2019. Both Stanley and Blocker were acquired by the ‘Canes from Swift Current last January.

First Roadie: The Hurricanes make their first road trip of the season as they visit the Regina Pats and Brandon Wheat Kings this weekend. The ‘Canes posted a 16-25-2-0 away from home last year, regular season and playoffs combined. So far this season, the ‘Canes are 1-0-0-0 on the road.

Seeing Double: The Hurricanes have twin brothers on their roster for the first time ever. Adam and Justin Hall were both drafted in the 2016 WHL Bantam Draft. They are the first brother tandem to suit up simultaneously for the Hurricanes since Axel and Albin Blomqvist in 2012-2013. Adam was born before Justin, by just two minutes.

Great Experience: Four Hurricanes players attended NHL Training Camps and Exhibition. Captain Jordy Bellerive and Calen Addison were with the Pittsburgh Penguins. Both appeared in one pre-season game with the Penguins; Addison earned an assist in his lone appearance. Defenseman Igor Merezhko was with the Calgary Flames and goaltender Akira Schmid attended the New Jersey Devils camp.