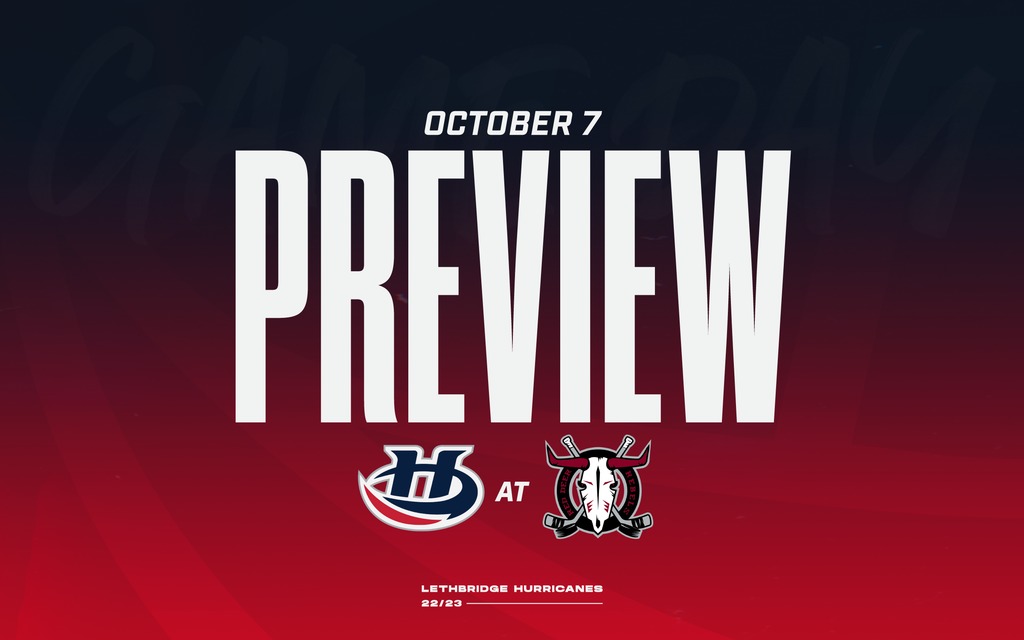 Red Deer, AB – The Lethbridge Hurricanes will end a three-game road trip tonight as they visit the Red Deer Rebels at Peavey Mart Centrium at 7:00pm.

The Hurricanes (2-2-0-0) enter after falling 3-0 in Prince Albert on Wednesday. It was the first time this season that the ‘Canes have been shutout after being blanked on six occasions last year. Jared Picklyk made 18-saves in the defeat as Lethbridge fell to 1-1-0-0 in the first two games of their trip. The Hurricanes are 1-2-0-0 this season on the road.

The Rebels (3-0-0-0) enter having won all three games so far this season including 4-2 victory last Saturday over the Regina Pats. Kai Uchacz scored twice in the victory while Carter Anderson and Jace Isley added the others in the win. Red Deer enters play tonight with a 2-0-0-0 home ice record and are one of five undefeated teams remaining in the WHL.

Tonight will be the first of six head-to-head meetings on the season between the Hurricanes and Rebels. Lethbridge posted a 3-3-2-0 record in eight contests last year against Red Deer. Tonight’s game can be watched at Browns Socialhouse in Lethbridge, on WHL Live or heard on 106.7 ROCK.

Clutch Cutch: Third year defenceman Logan McCutcheon enters tonight having collected five assists on the season and sits as the team leader in points. He is tied for most points by a defenceman in the WHL and is on pace for 85 points on the season. McCutcheon had a career-high 28 points last season.

Nice Debuts: Forwards Cole Shepard and Tyson Zimmer made their Hurricanes debut last Friday. Shepard struck for a power play goal while Zimmer picked up an assist in the game. The duo skated on a line with Alex Thacker and combined for four points in the victory against Medicine Hat.

Ty for Ty: On September 27th, the Hurricanes acquired 2004-born forward Tyson Zimmer from the Brandon Wheat Kings in exchange for a pair of draft picks. Zimmer appeared in 66 games for the Wheaties last season totaling 21 points (9g-12a). The ‘Canes also traded four-year veteran Ty Nash to the Winnipeg ICE in a separate trade.

Shep-Repped: On September 21st, the ‘Canes announced the acquisition of overage forward Cole Shepard from the Vancouver Giants in exchange for a third-round draft pick in 2023. Shepard had 20 points (7g-13a) in 28 games in 2021-2022 with the Giants. He is the younger brother of former Hurricanes forward Jackson Shepard who spent the 2018-2019 season in Lethbridge. He was re-assigned to Lethbridge by the Vancouver Canucks on Monday after appearing in one NHL pre-season game.

Solid Warm Up: The Hurricanes posted an impressive 3-0-1-0 record in their four-game pre-season. The ‘Canes earned wins against Medicine Hat and a pair against Red Deer. Lethbridge outscored their opposition 19 to 13 in the four games, an average of 4.75 to 3.25 per game.