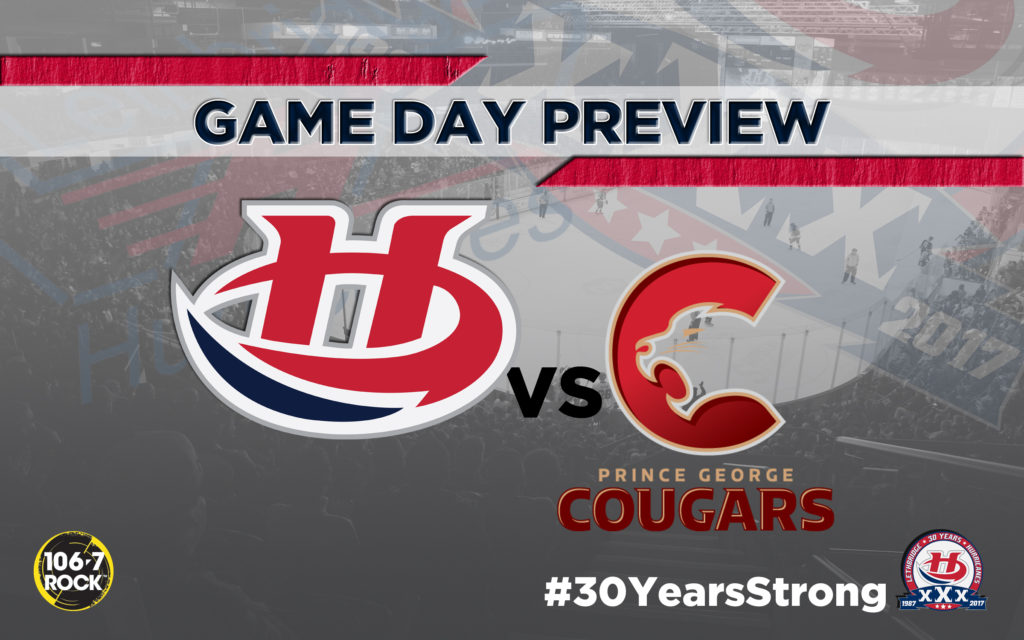 Lethbridge, AB – The Lethbridge Hurricanes return home to kick off a brief two game home-stand tonight when they welcome the league-leading Prince George Cougars at 7:00pm at the ENMAX Centre.

The Hurricanes (5-6-1-1) enter tonight having dropped five straight games after suffering a 6-1 loss last Friday in Brandon against the Wheat Kings. The ‘Canes last victory was October 12th against the Victoria Royals when they earned a 5-2 win. The ‘Canes have posted a 4-2-1-0 record on home ice this season.

The Cougars (12-2-1-0) are coming off a 5-2 victory on Wednesday night in Cranbrook over the Kootenay Ice in the first of a three game Central Division road trip. Prince George boasts a league-best 25 points entering play tonight and have posted a 4-0-1-0 record in their last five games.

Tonight is the first of two meetings between the Hurricanes and Cougars. It is also “Cougar Night” at the ENMAX Centre – bring your mom, wife or significant other to the game and when you buy a regular priced Adult ticket you’ll receive $5.00 off the second ticket.

Tickets are available online, by calling 403-329-SEAT (7328) or by visiting the ENMAX Centre or Yates Ticket Centres.

NEWS & NOTES:
200 For Estephan: Tonight will be the 200th WHL game for Hurricanes forward Giorgio Estephan. The four-year veteran has spent his entire career with the Hurricanes. In his 199 career games, Estephan has registered 159 points (69g-90a) along with 52 penalty minutes.

AP Call Up: The Hurricanes have called up 1999-born forward Connor Lyons for the weekend. Lyons was signed by the Hurricanes in September after going undrafted in the WHL Bantam Draft. Lyons, the son of former Hurricanes great Corey Lyons, has registered six points (4g-2a) in eight games with the Lethbridge Hurricanes Midget AAA so far this season.

Adding Up: The Hurricanes are in a stretch where they play 10 of 15 games on the road. In the last two weeks, the ‘Canes have racked up roughly 3,744 kilometres in travel. In the next three weeks, the Hurricanes will also make two separate trips to Kamloops-Victoria-Vancouver before a weekend back at home to then head back to the U.S. as they will make a Seattle-Everett-Portland trip.

Good News for Giorgio: Fourth year forward Giorgio Estephan has been named to Team WHL for the upcoming 2016 CIBC Canada Russia Series. Estephan is one of 12 forwards who will represent the WHL. He is the first Hurricane since Carter Ashton in 2009 to take part in the series.

Hockey Canada Calls: Hurricanes rookies Calen Addison and Josh Tarzwell are both competing at the World Under-17 Hockey Challenge in Sault Ste. Marie, Ontario. Addison is competing for Canada Black while Tarzwell is suiting up for Canada Red. Hurricanes Head Coach Brent Kisio and Video Coach Andrew Doty are also serving Canada White at the tournament in the same roles.