GAME DAY: Hurricanes Will Look to Duplicate Effort in Winnipeg 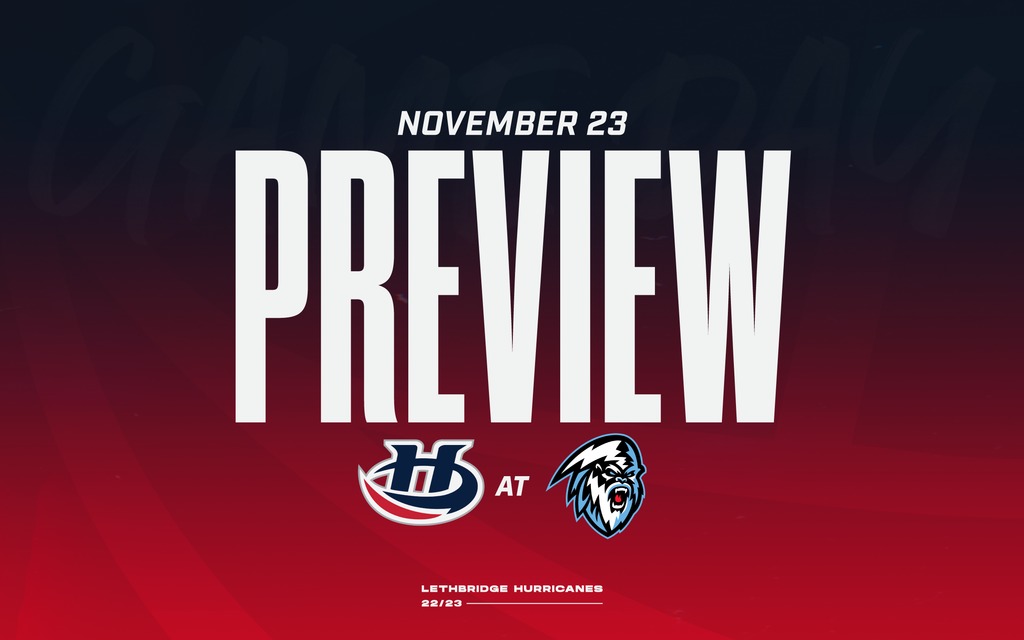 Winnipeg, MB – The Lethbridge Hurricanes continue their six-game road trip tonight at 6:00pm MT as they visit the Winnipeg ICE for the second straight night at the Wayne Fleming Arena.

The Hurricanes (12-9-0-1) earned a 2-1 victory against Winnipeg on Tuesday to begin their trip. Tristan Zandee and Tyson Zimmer scored first period goals while Harrison Meneghin earned first star honours with a career-high 36-saves in the victory. Lethbridge enters tonight 7-1-0-1 in their last nine games and sit with a 5-5-0-0 record away from home having won their last two road games.

The ICE (20-2-0-0) suffered just their second loss of the season last night against Lethbridge as it ended a 15-game winning streak. Former Hurricane Ty Nash scored for the third straight game in the defeat while goaltender Mason Beaupit made 35-saves in the setback. Winnipeg enters tonight with an 8-1-0-0 record at home this season as they will end a 10-game homestand.

Tonight will be the third of four meetings on the season between the Hurricanes and ICE. Lethbridge has posted a 1-1-0-0 record so far this season as the road team has been victorious in both previous match-ups this year. Tonight’s game can be watched at Browns Socialhouse in Lethbridge, on WHL Live or heard on 106.7 ROCK.

VS. ICE: Tonight will be the third of four meetings on the season between the Hurricanes and ICE. Lethbridge has posted a 1-1-0-0 record this season against Winnipeg, with the road team winning both contests so far this year. Lethbridge has posted an all-time record of 80-75-5-3 with six ties against the ICE franchise while going 3-1-0-1 in four games in Winnipeg.

Streakin’: The Hurricanes enter play tonight having posted a 7-1-0-1 record in their last nine games after a 2-1 victory on Tuesday against Winnipeg. The only regulation loss in that span came Saturday against the Edmonton Oil Kings. Lethbridge has won two-straight games away from home in that span.

Big Trip: The ‘Canes opened a six-game road trip on Tuesday with a win in Winnipeg. Lethbridge will play four games in Manitoba before a pair in Washington State. By the time the ‘Canes return home, they’ll have traveled roughly 4,200 kilometres in two weeks.

Rookie Tendy: Hurricanes netminder Harrison Meneghin who was named the WHL Goaltender of the Week for his efforts the week of November 12th has been outstanding this season posting an 8-3-0-1 record with a 2.18 goals against average and a .926 save percentage. Meneghin has won his last four starts posting a 1.22 GAA and a sparkling .961 SV%.

Tight Games: Entering tonight, the Hurricanes have played to a one-goal margin in 13 of their last 15 games. The ‘Canes have gone 8-4-0-1 in those 13 one-goal games and have posted a 9-4-0-1 record in one-goal games this season. Lethbridge went 16-6-4-1 in single goal games last year.

Faceoff King: Jett Jones enters tonight as the WHL leader in faceoffs taken this season with 547 draws taken. The Olds, AB, product has won 20+ faceoffs in a game three times this season, becoming the first Hurricanes centre-man to accomplish that feat on three occasions since the WHL began tracking faceoffs in 2017, surpassing Jake Leschyshyn and Giorgio Estephan – who both did it twice.