Gricius & Wilson named to Vaughn CHL Team of the Week 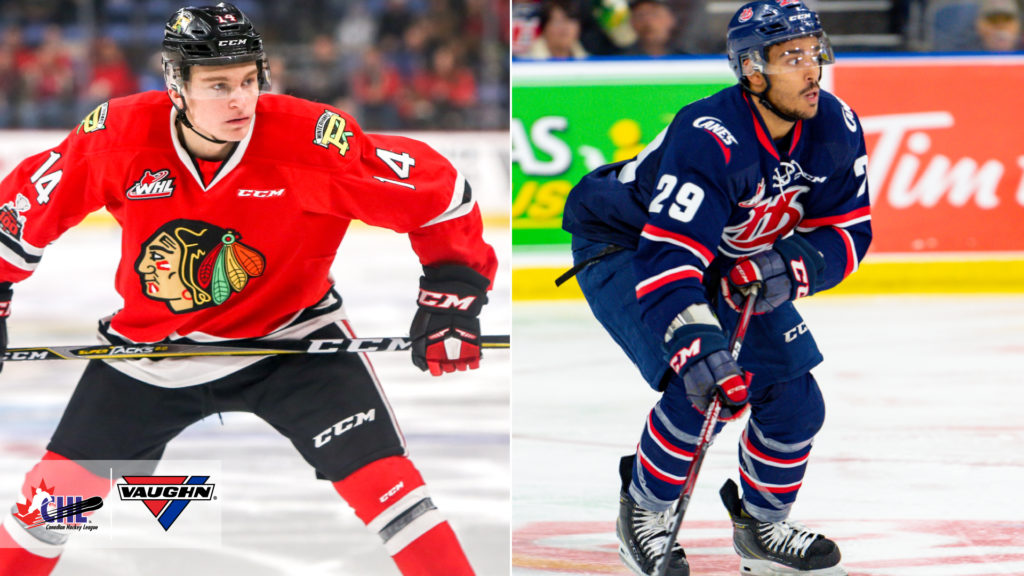 Toronto, Ont. – The Canadian Hockey League today announced the sixth edition of the Vaughn CHL Team of the Week for the 2019-20 season based on individual performances from Oct. 21-27. This week’s edition features Portland Winterhawks forward Jake Gricius and Lethbridge Hurricanes defenceman Koletrane Wilson from the Western Hockey League.

Leading the way up front is Val-d’Or Foreurs right-wing Nicolas Ouellet, who wrapped up the week with eight points (7G-1A) in three games. That stretch included back-to-back hat-tricks against Gatineau and Acadie-Bathurst, while Ouellet also added an assist in the latter contest to finish with four points and first-star recognition. For his efforts, the 20-year-old was named the Ultramar QMJHL Player of the Week.

Joining the forward ranks is London Knights centre and Washington Capitals first-round pick Connor McMichael, who finished the week with eight points (4G-4A) across a trio of contests. McMichael, who is currently riding a five-game point streak, is coming off back-to-back three-point performances, including his three-assist showing versus Niagara on Sunday that earned him second-star honours.

Portland Winterhawks centre Jake Gricius rounds out the forward ranks following a week in which he amassed seven points (3G-4A) over two games. That stretch included an incredible five-point effort against Spokane on Friday in which Gricius finished with two goals and three assists to claim first-star honours. The overager was also later recognized as the WHL On the Run Player of the Week.

On the blue line, Ottawa 67’s overage rearguard Noel Hoefenmayer earns a spot on the Vaughn CHL Team of the Week for the second week running following a seven-point performance over two games. The budding blue-liner’s best showing came Sunday against Sarnia as he matched his career high for points in one game with four assists to guide his club to a 7-2 victory.

Partnering on the back end is Lethbridge Hurricanes overage defenceman Koletrane Wilson who tallied five points (1G-4A) across three appearances. Wilson was a key performer in Tuesday’s 4-3 decision over Red Deer in which he finished with two points, including a power play marker midway through the middle frame en route to second-star recognition.

Between the pipes, Guelph Storm netminder Nico Daws won all three of his appearances, turning aside a combined 111 shots for a .949 save percentage and 1.95 goals-against average. Daws’ top performance came in a 35-save outing against Mississauga on Sunday that guided the Storm to a 4-0 victory and his second shutout of the season. For his efforts, Daws was recognized as the OHL On the Run Player of the Week. 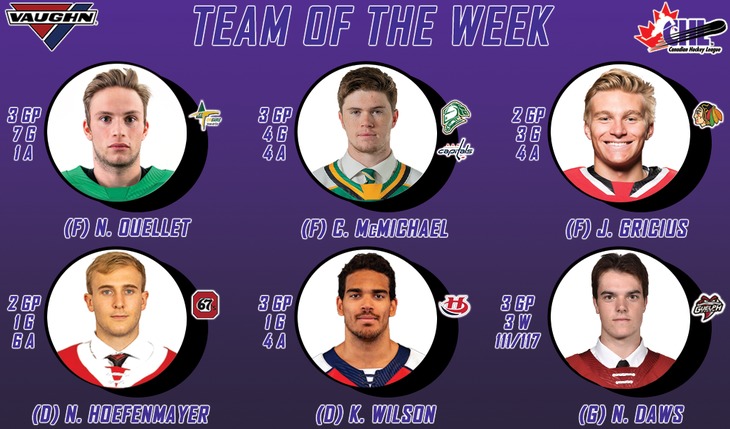 About the Western Hockey League
Regarded as the world’s finest development league for junior hockey players, the Western Hockey League (WHL) head office is based in Calgary, Alberta. The WHL consists of 22 member Clubs with 17 located in Western Canada and five in the U.S. Pacific Northwest. A member of the Canadian Hockey League, the WHL has been a leading supplier of talent for the National Hockey League for over 50 years.  The WHL is also the leading provider of hockey scholarships with over 350 graduates each year receiving WHL Scholarships to pursue a post-secondary education of their choice.  Each season, WHL players also form the nucleus of Canada’s National Junior Hockey Team.