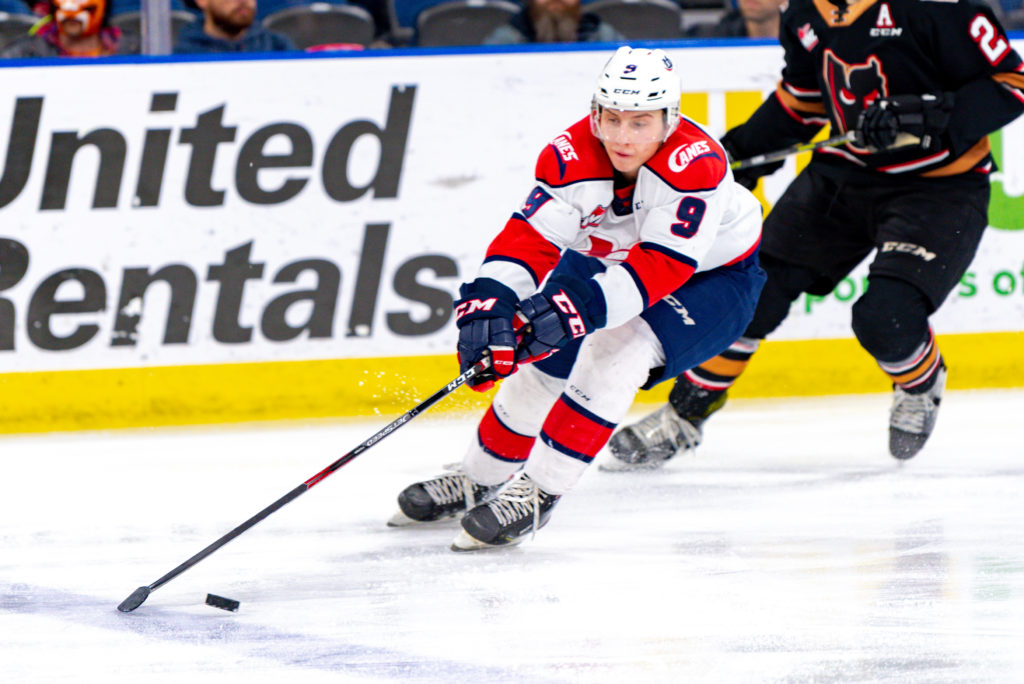 Lethbridge, AB – The Lethbridge Hurricanes dropped their second straight overtime game on Saturday falling 2-1 to the Calgary Hitmen at the ENMAX Centre.

The Hurricanes and Hitmen squared off for the fourth time in the last seven games and there was a playoff feel to the game. Lethbridge had a strong start to the game controlling the play early but Taber product Brayden Peters stood tall in the Calgary net early. The Hurricanes opened the scoring when Justin Hall extended his point-scoring streak to five-straight games with his 11th goal of the season at the 12:40 mark to make it 1-0; Noah Boyko and Jett Jones earned the assists on the goal. Calgary equalized just 1:35 later when Orca Wiesblatt slipped through the ‘Canes defense before beating Carl Tetachuk over the glove to see them even at 1-1 after twenty minutes of play.

It was a chippy second period that saw both teams push back against one another. Calgary, who was outshot 15-11 in the first period, held the advantage 10-6 in the shot department in the middle frame. The Hurricanes had their scoring chances in the period – as did the Hitmen – but both goaltenders turned aside all shots they faced in the middle frame that saw the game stay tied 1-1 after forty minutes of action.

The Hurricanes started the third period with a five-on-three power play for over a minute but failed to score with the extra man. The two teams continued to skate in the defensive battle as Calgary once again outshot the Hurricanes 13-7 in the third period. Neither team scored to end the game in regulation but just 18 seconds into the overtime, Mark Kastelic lifted one over the blocker of Tetachuk to give Calgary a 2-1 overtime victory.

Shots in the game favoured the Hitmen 35-28 while Lethbridge went 0/5 on the power play; Calgary went 1/2 on the man advantage.

The loss for the Hurricanes was their second straight overtime defeat, but extended their point streak to five straight games posting a 3-0-2-0 record in that span. The ‘Canes fall to 23-10-2-5 on the season while going 5-1-2-0 in eight games without Dylan Cozens, Calen Addison and Oliver Okuliar.

The Hurricanes visit the Calgary Hitmen on Friday, January 10th at Scotiabank Saddledome before returning to the ENMAX Centre on Saturday, January 11th when the Swift Current Broncos come to town. Tickets can be purchased online at www.enmaxcentre.ca, by calling 403-329-SEAT (7328) or by visiting the ENMAX Centre Ticket Centre.