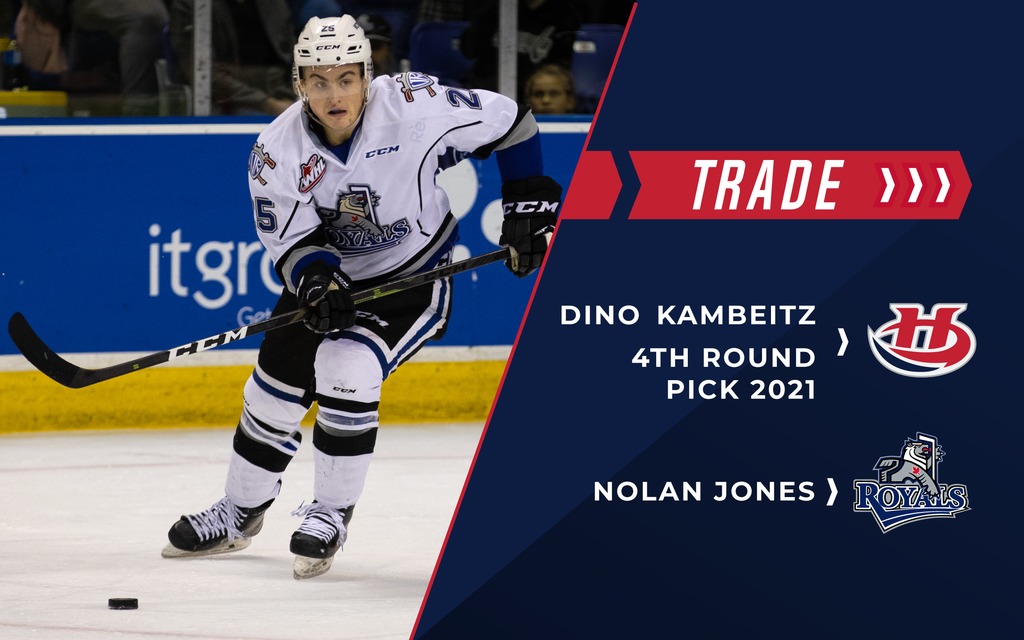 The Lethbridge Hurricanes Hockey Club have acquired 19-year-old forward Dino Kambeitz and a fourth round pick in the 2021 Western Hockey League Bantam Draft from the Victoria Royals in exchange for 18-year-old defenseman Nolan Jones.

Kambeitz, 19, was originally drafted by the Royals in the fifth round (90th overall) in the 2015 WHL Bantam Draft. The product of Parker, Colorado appeared in 67 regular season games in 2018-2019 registering 25 points (9g-16a) along with 48 penalty minutes. Kambeitz added five goals and seven points in 10 post-season games.

The 6’0”, 201-pound forward has skated in 138 regular season games with the Royals totaling 43 points (20g-23a) along with 102 penalty minutes while adding eight points (5g-3a) and eight penalty minutes in 13 career playoff games. Prior to joining the Royals, Kambeitz spent two seasons at the Edge School in Calgary.

“Kambeitz is a 19-year-old who we think will be a big piece for our group not only this year, but next as well,” said Hurricanes General Manager Peter Anholt. “We felt like we needed to add to our forward depth. It was a hard trade to make, but we were dealing from a position of strength.”

Jones, 18, was drafted by the Hurricanes in second round (41st) overall in the 2016 draft. He appeared in career games with the ‘Canes tallying 13 points (2g-11a) and 49 penalty minutes while adding one assist in eight post-season games.

“We want to thank Nolan for his contributions to the organization,” added Anholt. “Jones was a warrior for us and we appreciate everything that he did as a Hurricane and wish him the best in Victoria.”