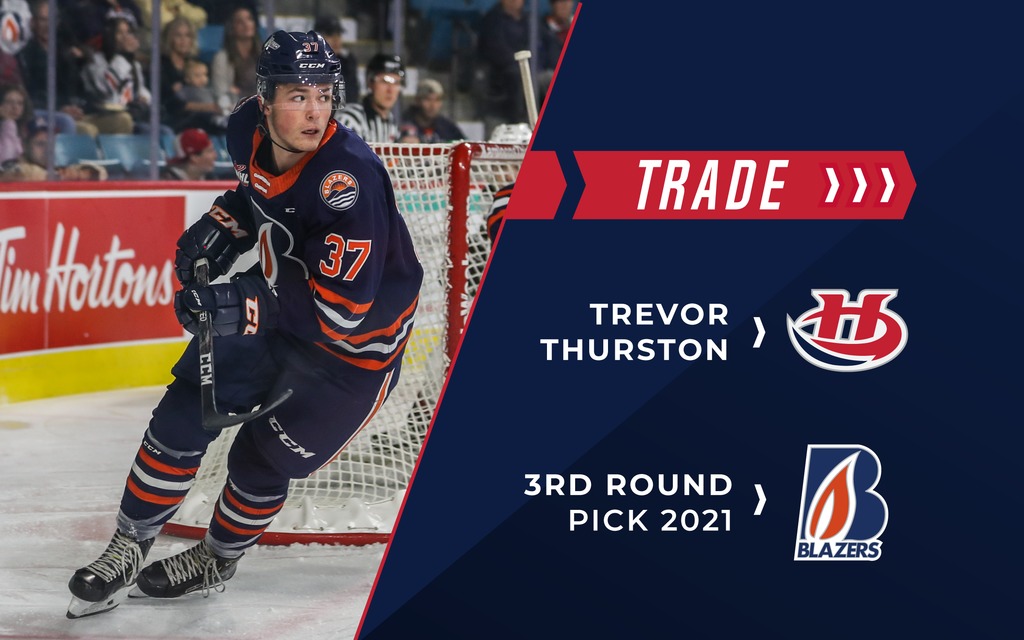 Lethbridge, AB – The Lethbridge Hurricanes Hockey Club announced Monday the acquisition of 2002-born defenseman Trevor Thurston from the Kamloops Blazers in exchange for a third round draft pick in the 2021 Western Hockey League Bantam Draft.

Thurston, 17, was originally drafted in the fourth round (81st overall) by the Blazers in the 2017 WHL Bantam Draft. The product of North Delta, British Columbia has appeared in eight games this season for Kamloops going pointless while totaling 26 penalty minutes.

The 6’2, 190-pound left-shot defenseman spent the 2018-2019 season with the Delta Hockey Academy Prep team in the CSSHL where he had 24 points (7g-17a) along with 79 penalty minutes in 21 games. Thurston played for the Delta Hockey Academy from Bantam all the way to Midget. In 98 career games with Delta at various levels, he collected 105 points (49g-56a) along with 270 penalty minutes.

With the addition of the Thurston, the Hurricanes now have a total of 23 players on their roster including 13 forwards, eight defenseman and two goaltenders. He also becomes the seventh 2002-born player on the Hurricanes.

The ‘Canes return to action on Wednesday when they travel to Swift Current to face the Broncos. Lethbridge will welcome the Prince Albert Raiders on Friday at 7:00pm at the ENMAX Centre. Tickets are available by calling 403-329-SEAT (7328), online at www.enmaxcentre.ca, or in person by visiting the ENMAX Centre and Yates Memorial Theatre Ticket Centre’s.