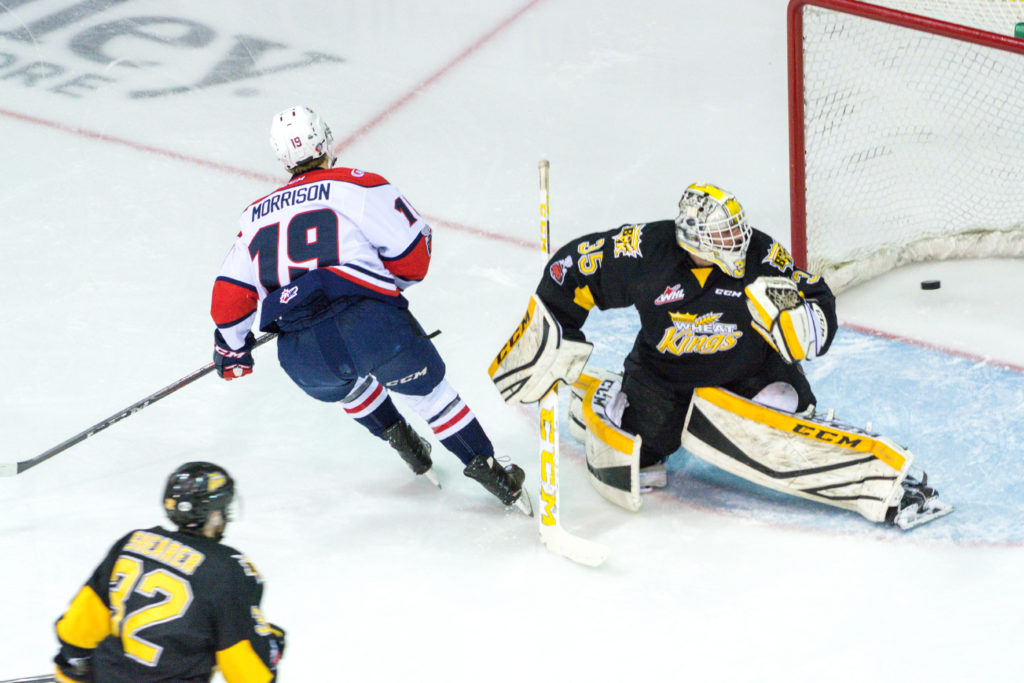 Lethbridge, AB – The Lethbridge Hurricanes booked their ticket to the Eastern Conference Championship Series with a 3-0 victory over the Brandon Wheat Kings on Friday in front of a sellout crowd at the ENMAX Centre.

The Hurricanes had a great opening shift in the hockey game but weren’t able to solve Dylan Myskiw in the first thirty seconds of the game. The ‘Canes had an early power play opportunity and once again failed to find the net. Brandon received a power play chance shortly thereafter and Taylor Ross would get away on a breakaway before being hauled down resulting in a penalty shot; Ross would be stopped. However, on the same penalty kill Brad Morrison continued to roll as he sniped home a shorthanded goal on a breakaway at the 10:09 mark to make it 1-0 Lethbridge; Jordy Bellerive and Ty Prefontaine earned the helpers. Shots were even at 11-11 after twenty minutes of play.

The ‘Canes continued to push in the second period as they had a plethora of chances to build on their lead but Myskiw stood tall. The ‘Canes eventually added to their lead as Logan Barlage snapped home his fourth of the post-season and third in as many games to make it 2-0 with a power play tally at the 10:53 mark; Tate Olson and Jake Elmer earned the assists. Brandon outshot Lethbridge 12-10 in the second period.

Brandon pushed hard in the third period in hopes of a getting on the board but failed to do so. Logan Flodell made countless great saves to keep the Hurricanes ahead by two. The Wheat Kings pulled the goaltender Myskiw with two minutes left as a last ditch effort to mount a comeback but Morrison rounded out the scoring with an empty net goal to make it 3-0 Lethbridge with 6.3 seconds left.

The shots were tied 9-9 in the third period while Brandon outshot Lethbridge 32-30 in the game. The ‘Canes went 1/4 with the power play while the Wheat Kings were 0/3.

The win for the Hurricanes advances them to the Eastern Conference Championship Series for the second straight season as they will face either the Moose Jaw Warriors or the Swift Current Broncos.