Hurricanes’ Barlage named WHL On the Run Player of the Week 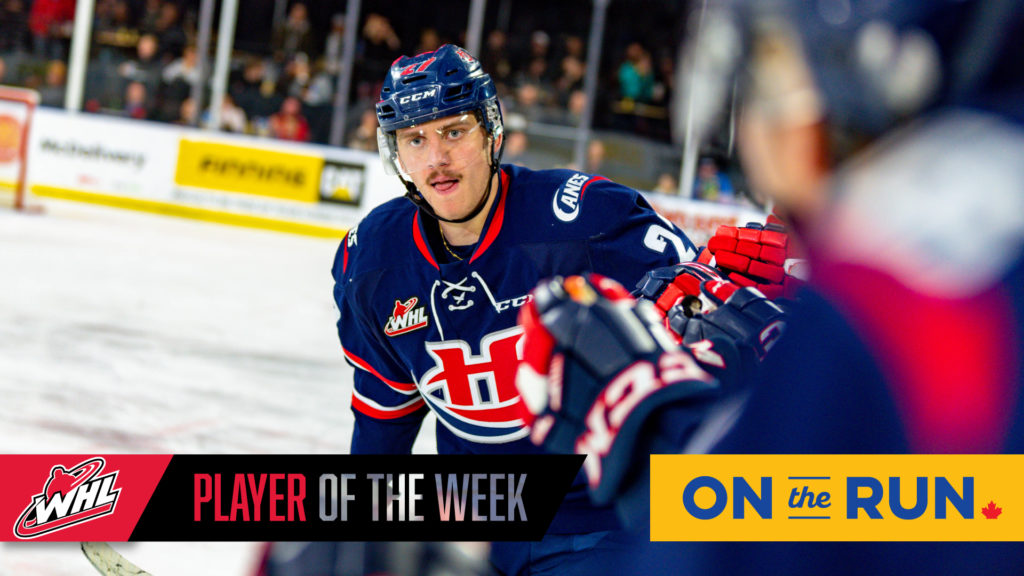 Calgary, Alta. – The Western Hockey League announced today that Lethbridge Hurricanes forward Logan Barlage has been named the WHL On the Run Player of the Week for the week ending November 24, 2019.

Barlage led all WHL skaters with nine points (3G-6A) and a plus-six rating in three games as the Hurricanes won twice to take over sole possession of the lead in the Central Division. The Hurricanes’ record through 26 games now stands at 16-7-0-3.

In Wednesday’s 6-2 win over the Swift Current Broncos, Barlage recorded a goal and an assist against his former team. Barlage scored Lethbridge’s third goal of the contest, securing the game-winning goal while adding a secondary assist on the team’s second goal. Barlage was named the first star of the game for his efforts. Friday’s 5-3 loss to the Prince Albert Raiders saw Barlage collect another multi-point performance with a goal and an assist, scoring his team’s third goal and assisting on their first.

Barlage saves his best performance of the week for Saturday, recording a goal and four assists in an 11-2 victory over the Red Deer Rebels. The Hurricane forward scored the ninth goal of the game for Lethbridge, also adding assists on their first, fifth, sixth, and 10th goals. Barlage was named the third star of the game for his performance.

The 18-year-old from Humboldt, Sask. has taken another step forward in his offensive performance this season, recording 19 points (7G-12A) in 24 games, including two power-play goals and three game-winning goals. Barlage was originally chosen by the Broncos with the fourth-overall selection of the 2016 WHL Bantam Draft. Since then, the 6-foot-5, 205-pound forward has recorded 78 points (29G-49A) in 167 WHL regular season games. Those figures include six power-play goals and eight game-winning goals.

He’s also appeared in 39 WHL playoff games with the Broncos and Hurricanes, recording 11 points (7G-4A), including five power-play goals and one game-winning goal.

Barlage and the Hurricanes return to action on Wednesday, November 27 (7:00 p.m. MT) when they host the Regina Pats at the ENMAX Centre.