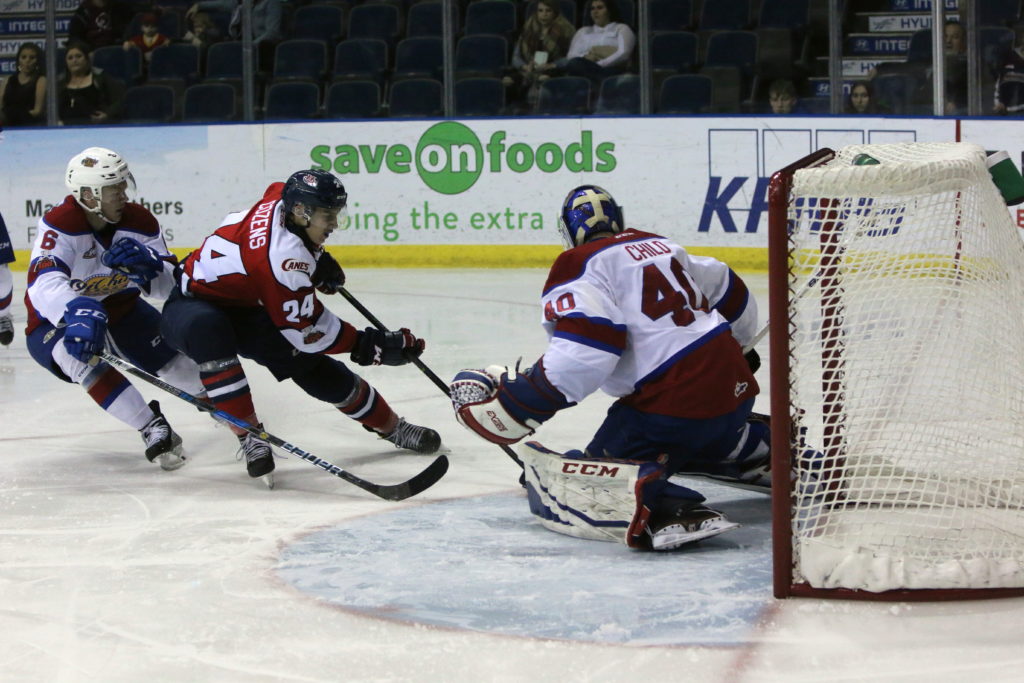 Edmonton, AB – The Lethbridge Hurricanes earned their second straight victory as they downed the Edmonton Oil Kings 5-2 Sunday afternoon at Rogers Place as the ‘Canes overtake the Central Division lead.

It was a strong first period for the Oil Kings who had a bulk of the scoring chances while outshooting the Hurricanes 13-2 in the first twenty minutes. Edmonton had three power play opportunities in the opening frame but Liam Hughes made some big saves to keep the game scoreless, including two saves on two-on-ones. The Hurricanes best chance came on a two-on-one shorthanded but Jake Elmer fired a shot wide of the net. Despite the lopsided shot differential, the game was scoreless after twenty minutes of play.

Edmonton opened the scoring 3:25 into the second period as Jalen Luypen stickhandled by a Hurricanes defender before back-handing home his fifth of the season, three of those against the Hurricanes, as the Oil Kings had a 1-0 lead. The ‘Canes responded to tie the game on a power play goal by Dylan Cozens at the 5:57 mark to make it 1-1; Nick Henry drew the lone assist on the goal as he extended his point-scoring streak to 11-games. Lethbridge pulled ahead at the 8:23 mark as Logan Barlage scored his 10th goal of the season on a back-hand after a centering pass by Noah Boyko to make it 2-1 for the Hurricanes. Late in the period, the ‘Canes added another off the rush as Taylor Ross scored his 23rd of the year with the assists to Cozens and Elmer – Ross’ shot hit the goal post before hitting Edmonton’s goalie Dylan Myskiw in the back to cross the line. Lethbridge was outshot 15-14 in the second period, but led 3-1 after forty minutes of play.

The Hurricanes were assessed a bench minor penalty at the end of the second period resulting in a five-on-three power play to start the third period for the Oil Kings and Edmonton struck to pull to within one when Conner McDonald beat Hughes with a slapshot just 1:10 into the period to make it 3-2 for the ‘Canes. The Hurricanes struck on the power play themselves as Boyko snapped a 17-game goalless drought with his fourth of the season at 12:07; Cozens and Elmer picked up the helpers on the goal. Lethbridge rounded out the scoring as Jordy Bellerive scored his 20th goal of the season into an empty-net to make it a 5-2 final.

Edmonton outshot Lethbridge 41-26 in the contest. The Hurricanes went 2/5 on the power play while the Oil Kings were 1/8 with the extra man.

The win for the Hurricanes was their second straight victory as they improve to 12-2-2-2 in their last 18 games and 21-10-4-4 on the season. The win for the ‘Canes also leapfrogs the Oil Kings for first place in the Central Division.

The ‘Canes will return to the ENMAX Centre on Wednesday, January 9th to host the Kootenay Ice before welcoming the Oil Kings on Friday, January 11th. Tickets can be purchased online at www.enmaxcentre.ca, by calling 403-329-SEAT (7328) or by visiting the ENMAX Centre Ticket Centre.