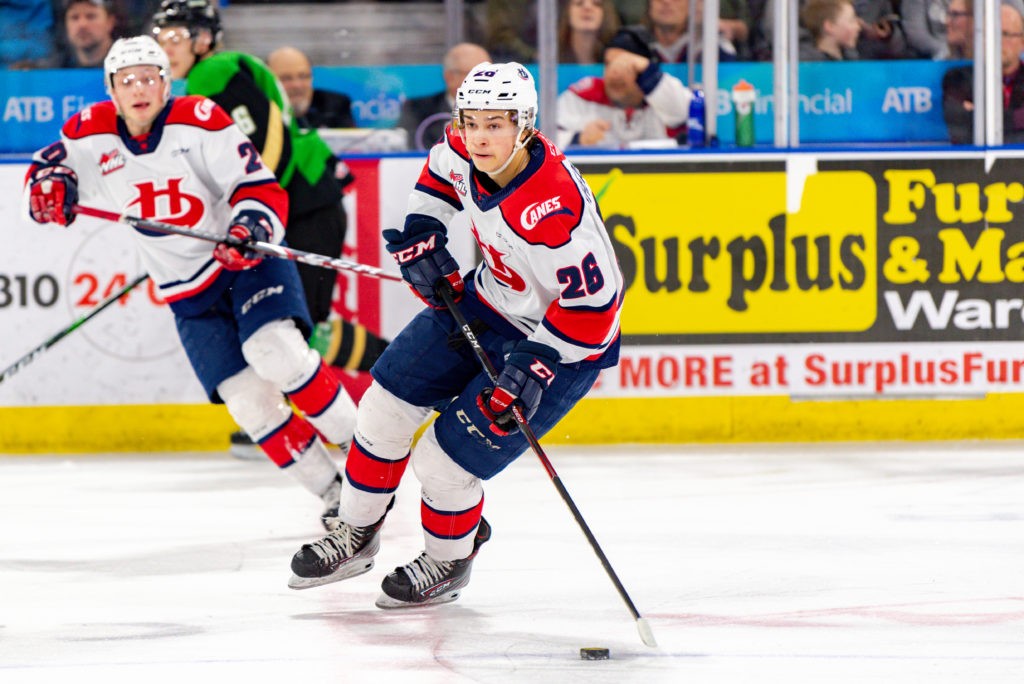 Lethbridge, AB – The Lethbridge Hurricanes returned to the ENMAX Centre after 22 days on Saturday as they earned a 3-1 win over the Prince Albert Raiders in front of 4,763 fans.

The Hurricanes were slow out of the gate as the Raiders outshot them 8-1 early in the game and jumped out to a 1-0 lead as Zack Hayes beat Carl Tetachuk on a one-timer just 4:27 into the game. The ‘Canes came on in the middle part of the period as they went on a 9-2 shot run and would tie the game when Oliver Okuliar ended a four-game goal-scoring drought with his 29th of the season to make it 1-1 with 6:17 left in the first period; Logan Barlage and Alex Cotton earned the assists on the goal. Shots favoured Prince Albert in the first period 13-10.

The two teams slugged it out back-and-forth in the second period but both goaltenders – Tetachuk and Max Paddock – stood tall keeping both teams off the scoresheet. Both the Raiders and Hurricanes had strong scoring chances in the middle frame including two point-blank chances for Prince Albert that were stymied by Tetachuk. Hurricanes held the edge in shots in the second period 16-6 but the game stayed tied 1-1 after forty minutes of play.

In the third period, it was a tentative start from both teams. The ‘Canes pulled ahead taking their first lead when Calen Addison ripped home his ninth goal of the year to make it 2-1 Lethbridge midway through the third period; Alex Thacker and Brett Davis earned the assists on the goal. Prince Albert pulled the goaltender late in the game and the Hurricanes iced the win as Okuliar scored his second goal of the night and 30th of the season into the empty net with 1:38 remaining to make it a 3-1 final.

Shots in the third period favoured the Hurricanes 11-9 as they outshot Prince Albert 37-28 in the game. Lethbridge went 1/4 on the power play and 5/5 on the penalty kill.

The win for the Hurricanes was their third straight victory as they end a three-game losing streak against the Raiders. The victory improved the ‘Canes home-ice record to 14-5-2-4 on the season while lifting their overall record to 32-12-2-5 on the year.

The win for the ‘Canes was also the 189th career coaching victory for Brent Kisio who surpasses Bryan Maxwell as the all-time leader in coaching wins in Hurricanes franchise history. Kisio earned the 189th win in his 324th game behind the bench.

The Hurricanes visit the Calgary Hitmen on Sunday afternoon at 4:00pm before returning to the ENMAX Centre next weekend for a pair of games against the Winnipeg ICE on Friday and Saturday on February 14th and 15th. Tickets can be purchased online at www.enmaxcentre.ca, by calling 403-329-SEAT (7328) or by visiting the ENMAX Centre Ticket Centre.