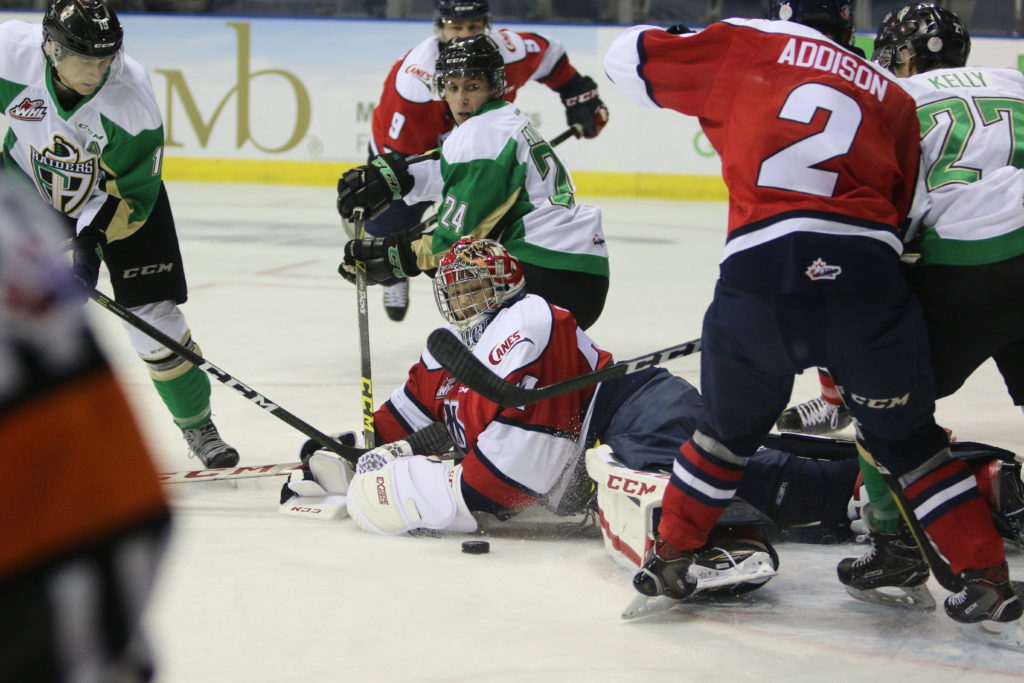 Lethbridge, AB – The Lethbridge Hurricanes began October the way they ended September as they earned a 4-1 victory Friday night over the Prince Albert Raiders at the ENMAX Centre.

The Hurricanes remained without many key players including Ryan Vandervlis, Jadon Joseph, Tate Olson, Ryan Bowen and Jake Elmer. However, the ‘Canes received Tanner Nagel back after he had missed the last two games.

It was a sloppy opening period but the Hurricanes escaped with a 1-0 lead. The ‘Canes scored the lone goal with a 5-on-3 power play. After moving the puck around very quickly and generating countless scoring chances, Calen Addison let a point shot go that found its way passed Raiders goaltender Curtis Meger putting the ‘Canes ahead 1-0 – Giorgio Estephan and Jack Flaman picked up the assists. The ‘Canes and Raiders each had 15 shots in the first period as both goalies were busy and sharp in the opening twenty minutes.

The Hurricanes added to their lead early in the second period as Tanner Nagel scored his first of the season in his return to the line-up just 3:02 into the period – Dylan Cozens and Zane Franklin earned the assists on the goal that made it 2-0 Lethbridge. Prince Albert got on the board at the 7:09 mark as Sean Montgomery snapped on high over the blocker of Stuart Skinner who made three outstanding saves in the sequence prior to the goal. It was a rough second period as well as there was two fights and countless post-whistle scrums. The Raiders outshot the ‘Canes 10-7 in the middle frame.

The Raiders continued to press in the third period in hopes of tying the game but they could not solve Skinner was remained sharp. The ‘Canes received some insurance from rookie forward Jayden Davis who scored his first WHL goal on a solo-rush. Davis broke up a play in his own zone before turning up ice and driving the net before slipping one short side on Meger to make it 3-1. The Raiders pulled the goaltender with over three minutes remaining but the ‘Canes rounded out the scoring as Estephan picked up the helpers on the goal.

The win for the Hurricanes improved their overall record to 3-2-0-0 on the season while remaining a perfect 3-0-0-0 on home ice. The ‘Canes are back in action on Tuesday when they travel to face the Swift Current Broncos.