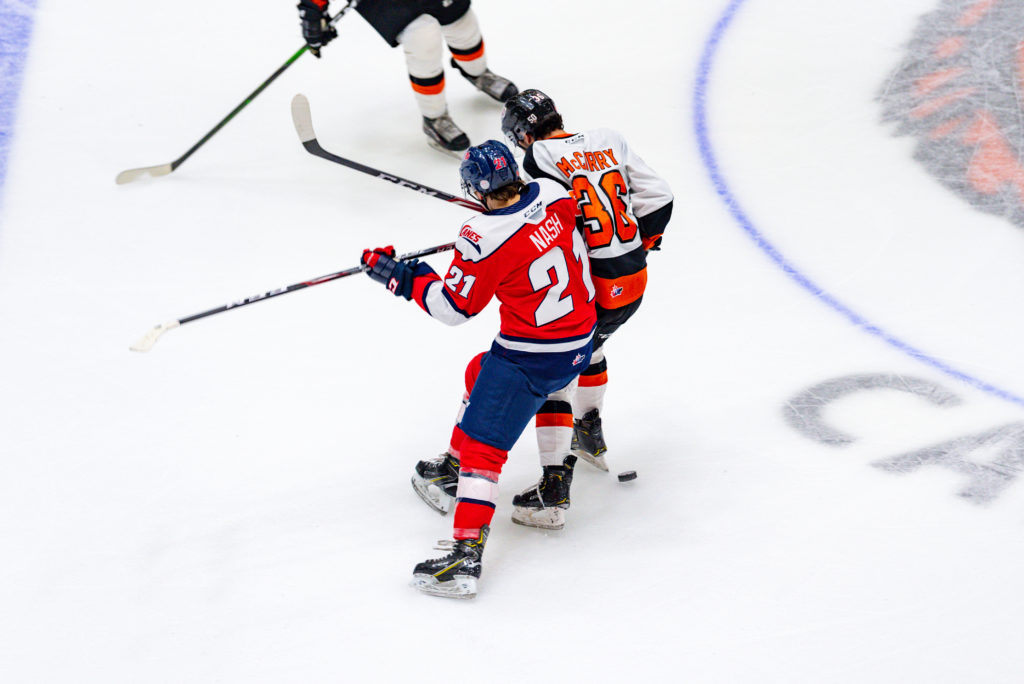 Medicine Hat, AB – The Lethbridge Hurricanes began a seven game road stretch on Saturday with a 6-2 loss to the Medicine Hat Tigers at the Canalta Centre.

It was a terrible start to the game for the Hurricanes as the Tigers struck on the first shift of the game as the Medicine Hat captain James Hamblin beat Carl Tetachuk on the first shot of the game just 12 seconds into the game to quickly give the Tigers a 1-0 lead. Hamblin struck again at the 3:59 mark to make it 2-0; Medicine Hat had two goals in the game before the Hurricanes had generated a shot on goal. Late in the period, while on a power play, the Hurricanes surrendered a shorthanded breakaway to Hamblin who roofed one over the glove of Tetachuk to complete the first period natural hat-trick as Medicine Hat led 3-0 after twenty minutes of play.

Bryan Thomson replaced Tetachuk to start the second period after the Tigers scored three goals on 11 shots in the first period. The ‘Canes got on the board at the 7:12 mark in the middle frame as Dylan Cozens – who wore the ‘C’ for the first time – banged home his 21st goal of the year to make it a 3-1 game; Calen Addison and Ty Prefontaine earned the assists on the game. Just over two minutes later, the Tigers restored their three-goal lead as Dylan Plouffe beat Thomson with a long-range point shot on a power play to make it 4-1 for Medicine Hat after two periods. The ‘Canes held the edge in shots 23-22 after forty minutes.

In the third period, Hamblin scored his fourth goal of the game on a breakaway just 2:03 into the period slipping one through the legs of Thomson to make it a 5-1 score – Hamblin becoming the second player in the WHL this season to score four goals in a game. Lethbridge pulled back to within three when Justin Hall scored his 12th goal of the season on a one-timer at the 3:47 mark but the second shorthanded goal of the game for the Tigers made it 6-2 as Ryan Chyzowski ripped one over the shoulder of Thomson to give the Tigers the four-goal advantage as they would hold the 6-2 lead for the final as the ‘Canes have now lost four-straight games against Medicine Hat and fall to 1-2-0-3 on the year against the Tigers.

Shots in the third period favoured the Tigers 12-5 as they outshot the ‘Canes 34-28 in the game. Lethbridge went 0/4 on the power play while Medicine Hat was 1/5 with the extra man.

The loss for the Hurricanes ends a stretch of eight games where the ‘Canes earned at least a point in the game as they fall to 6-1-2-0 in their last nine outings and 9-2-2-0 in their last 13 games. The ‘Canes road record falls to 13-6-0-1 on the year while their overall record slips to 26-11-2-5 on the year as the Tigers leapfrog the Hurricanes for second in the Central Division.

The Hurricanes continue their stretch of seven straight games on the road on Wednesday when they visit the Moose Jaw Warriors at 6:00pm at Mosaic Place. The ‘Canes will be back at the ENMAX Centre on Saturday, February 8th when they welcome the Prince Albert Raiders. Tickets can be purchased online at www.enmaxcentre.ca, by calling 403-329-SEAT (7328) or by visiting the ENMAX Centre Ticket Centre.