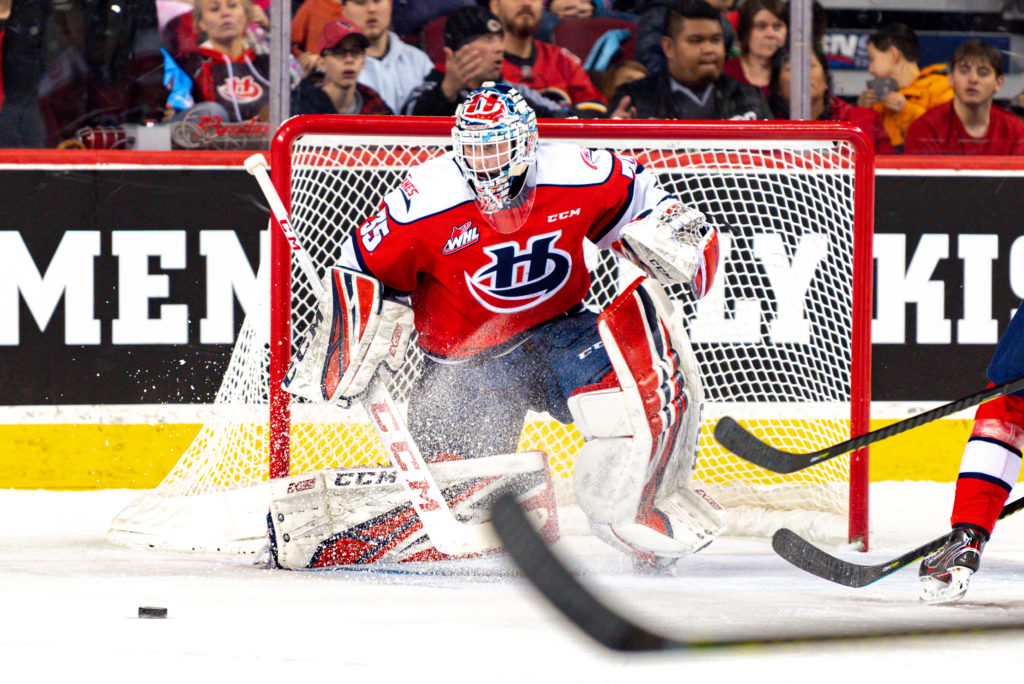 Calgary, AB – The Lethbridge Hurricanes ended a three-in-three weekend on Sunday afternoon with a 3-2 win  over the Calgary Hitmen at Scotiabank Saddledome to begin a four-game road trip.

After a lengthy pre-game ceremony that saw for Hitmen General Manager, and father of Hurricanes head coach, Kelly Kisio inducted into Calgary’s ‘Forever A Hitmen’, the ‘Canes had a strong start to the game as they had some jump early. Lethbridge had a pair of power play opportunities in the first period, but failed to capitalize on them. The Hurricanes did open the scoring at the 12:48 mark when Chase Wheatcroft ended a 12-game goal drought as he deflected a Ty Prefontaine point shot passed Brayden Peters to make it 1-0; Jett Jones was credited with the second assist. The Hurricanes outshot the Hitmen 13-9 in the first period as Carl Tetachuk was strong making a handful of point-blank saves to keep Calgary off the board.

The Hurricanes added to their lead early in the second period when Koletrane Wilson sent a shot in from the blue-line that was redirected in from of the net by Dino Kambeitz to give the Hurricanes a 2-0 lead. Tetachuk continued his strong play in the middle frame turning aside all 15 Calgary shots, including a chance at the side of the net for Mark Kastelic that saw Tetachuk dive across to pull it off the goal-line with the paddle to keep it 2-0 for the Hurricanes.

The Hitmen had a strong push in the opening minutes of the third period as Orca Wiesblatt got Calgary on the board with his 19th goal of the season just 1:19 into the period. After the Hurricanes were assessed back-to-back penalties, resulting in a five-on-three power play opportunity for the Hitmen and they would tie the game. At the 5:24 mark, Riley Stotts banged home a loose puck in front of the net on a rebound to even the score at 2-2. However, just nine seconds after the Hitmen tied the game, the Hurricanes answered back with their league-leading 14th shorthanded goal of the year as Kambeitz finished off a centering pass from Dylan Cozens for his second goal of the game while giving Lethbridge a 3-2 lead which would stand up as the final score.

The Hurricanes were outshot 12-7 in the third period and 33-26 in the game. Lethbridge was 1/5 with the power play while Calgary was 1/7 with the extra man.

The Hurricanes continue a four-game road trip on Wednesday as they visit the Prince George Cougars at 8:00pm MT. The Hurricanes will be back at the ENMAX Centre on Friday, March 13th when they welcome the Edmonton Oil Kings at 7:00pm. Tickets can be purchased online at www.enmaxcentre.ca, by calling 403-329-SEAT (7328) or by visiting the ENMAX Centre Ticket Centre.