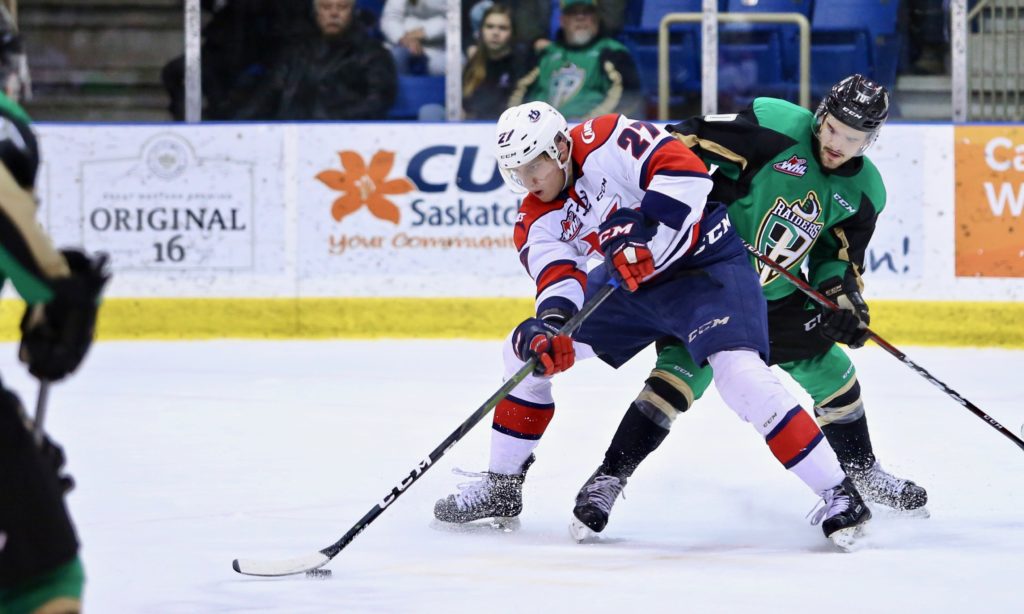 Prince Albert, SK – The Lethbridge Hurricanes began a four-game in five-night road trip on Tuesday in Prince Albert with a 5-1 loss to the Raiders.

It was a fast-paced first period between the ‘Canes and Raiders. Prince Albert struck first just 4:30 into the game on a partial three-on-two as Brett Leason potted his 20th goal of the season on a centering pass by Parker Kelly to make it 1-0; Brayden Pachal earned the second assist on the goal as Leason extends his point-scoring streak to 22-straight games to start the season. The Hurricanes had a power play midway through the period but were unable to capitalize with the extra man as the Raiders led 1-0 after twenty minutes of play. Shots were tied 11-11 in the opening stanza.

The ‘Canes struck early in the second period to tie the game as Taylor Ross potted his team-leading 12th goal of the season just 28 seconds into the period beating Ian Scott on a rebound for the unassisted goal. Lethbridge had some great chances to take the lead as they were able to hem the Raiders in their own zone but Scott stood tall to keep it a tie game. Prince Albert pulled ahead with a late period goal as Pachal let a point-shot go that pin-balled into the net with 1:05 left in the middle frame to make it 2-1 Raiders after two periods. Shots favoured the Raiders 13-10.

The Raiders pulled away in the third period as Leason potted a shorthanded goal at the 7:03 mark making it a 3-1 hockey game. Leason completed a hat-trick just over four minutes later as he potted his 22nd of the season at the 11:35 mark from Kelly and Pachal. Lethbridge was handed a five-on-three power play but failed to capitalize and then was given a five-minute power play with just over three minutes left in the game and again allowed a shorthanded goal as Lethbridge-product Kody McDonald scored his third of the season to make it a 5-1 final.

Shots in the third period favoured the Raiders 14-9 as they outshot the ‘Canes 38-30 in the game. Lethbridge went 0/5 on the power play and 3/3 on the penalty kill.

The loss for the Hurricanes was their second straight defeat as they have now lost four of their last five as the loss drops the ‘Canes record to 9-8-2-2 on the season.

The Hurricanes continue their road trip on Wednesday in Saskatoon against the Blades at 6:00pm MT. The ‘Canes will be back at the ENMAX Centre on Friday, November 30th when they welcome the Swift Current Broncos on the Annual Toque and Teddy Toss! Tickets are available online, by calling 403-329-SEAT (7328) or by visiting the ENMAX Centre and Yates Ticket Centre’s.